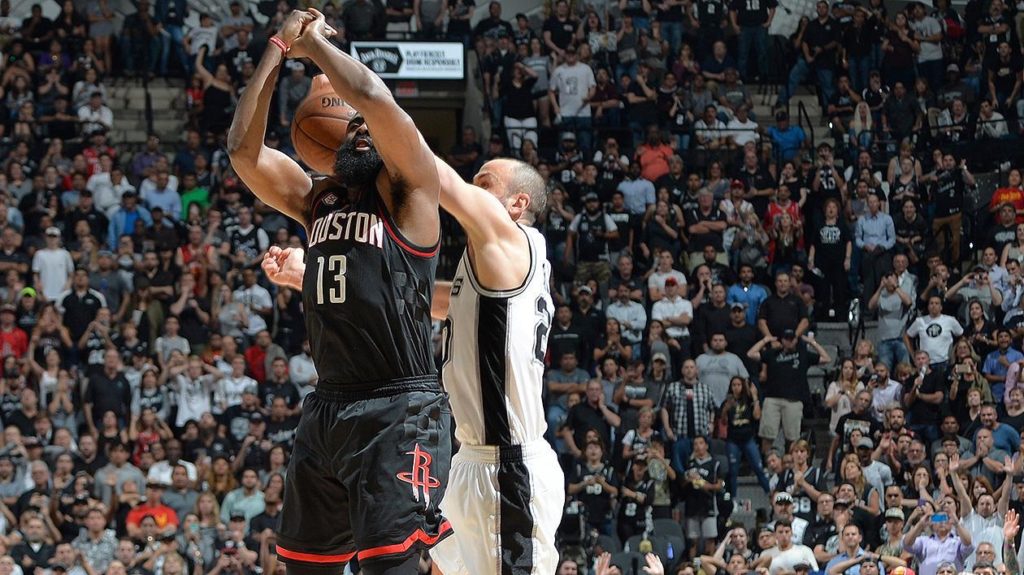 Manu Mans Up For Spurs On The Block

There’s only one thing that beats a game winning shot…

In the NBA Playoffs last night San Antonio Spurs guard legend Manu Ginobili turned back the clock like Emmanuel and beat the buzzer by beating James Harden’s clutch three-pointer attempt out of his hands.

This could very well be the play of the playoffs.

The triple-double MVP bound beard had 33 points, 10 rebounds and 10 assists. But he almost had a quadruple double with 9 turnovers and one costly one at the horn as his 33 points weren’t joined by another triple and three. All was left was the new Big Game James rising and following through with the gooseneck but sans ball like an old NBA Live CPU.

This time for Houston Manu was the problem as number 13 had a stroke of bad luck.

Now the point propelled Rockets are on the ropes with one or two games to go. Down to the way the ball falls.

With Manu stepping up to the good ole days if only the Spurs had this time of clutch cluck when Laker Derek Fisher hit them for 0.4 seconds following Tim Duncan’s would-be game-winner all those postseasons ago.

But that doesn’t matter now. All that does is that with the game and the series momentum on the knockout line Manu saved the day. And now in this battle for Texas San Antonio have the advantage with only one game to win in what could have gone either way over one shot.

GINOBILI had 12 points, 7 rebounds, 5 assists and one of the biggest moments of his career and San Antonio Spurs and NBA Playoff history.

He also had the “grandpa juice” according to back-up guard Patty Mills, who called in to start for an injured Tony Parker posted 20 points and 4 assists. Manu had to man up as the Spurs were also without quiet superstar Kawhi Leonard nursing an ankle injury like boats in this city do the Riverwalk. LaMarcus Aldridge also had a monster double-double with an almost 20 and 15, 18 points and 14 rebounds. But it was Ginobili who went into full beast mode, shaving points off the beard and keeping the Spurs a cut above this series.

With the Mavericks fishing in Dallas this lone-state, NBA Texas triangle is about to come down to just one point in maybe as many a game. Or as many a point on the board too.

The block or the shot. It all comes down to has the fastest hands in the West.