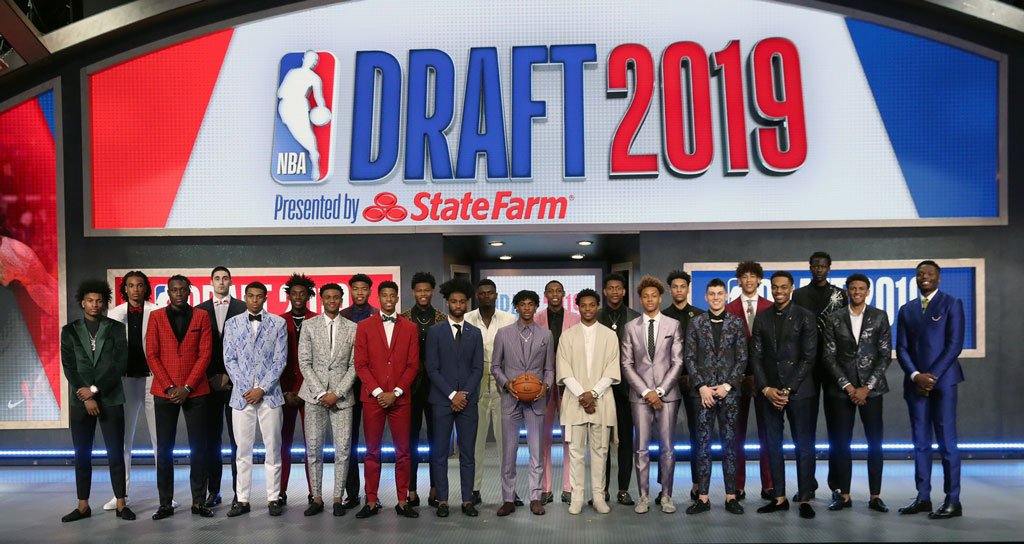 Cause for celebration, or at least a premature parade in a conclusion as foregone as the Anthony Davis trade with the Lakers. The Duke KABOOM of all the all dunking Zion Lion is a YES for N.O. As with the first pick in the 2019 NBA Draft live from New York City a few days before Saturday Night, Williamson is a New Orleans Pelican.

The most exciting league prospect since LeBron James may not get to play with the King’s new man after the Davis trade. But he has all the toys in the form of all the boys that would have been the future of the Lake Show (out of a lucky 13 over the last half-decade of drafts only Kyle Kuzma remains) in the young princes of soaring, scoring Brandon Ingram, true teammate Josh Hart and the alley-oops to be thrown by point man and former number 2 pick like B.I., Lonzo Ball (have you noticed that since this trade there has been little word of Zion dropping out the draft and heading back to college like Yeezus in reverse?). Not to mention Julius Randle if they can convince the big to stay and bolster their Davis-less frontcourt with the top picks of guys like Okafor. And not to forget like Jrue Holiday all the draft choices over the next few years the Pels will get. Just like the one they’ve just traded on draft night. As with the fourth pick in the 2019 Draft the Los Ange…sorry the New Orle…excuse me, the Atlanta Hawks select DeAndre Hunter.

Good will hunting. See what you could have won Lake Show?

I guess the Duke isn’t going back to college anymore.

What a way to replace Davis in a matter of days with the Thanos game changing, season of wind in a draft snap.

But like the year the King took his throne with the likes of Carmelo and the Flash of Dwyane for his first dance, the NBA Draft isn’t just about one man, Sam Bowie.

Must Read:
New Toronto 'City' Jerseys Point North To The 6

And as the Just Do It Nike campaign “from underated to undeniable” don’t write off Murray State’s Ja Morant like people did and for some reason still do (Hello Brooklyn?!) D’Angelo Russell. Replacing veteran the Grizz grit legend of Mike Conley Jr. traded to Utah, Morant will bring that grind. Rolling, expect Ja to rule Memphis like another King with the rock.

Now the New York Knicks may have wanted to make Zion their new King, but the lottery that New York didn’t win weeks ago already said balls to all that. But judging from the reaction of ‘BlackKklansman’ director Spike Lee with the big three pick, the Mecca made the right choice with the franchises new face of Madison Square Garden and Big Apple in another Duke standout in R.J. Barrett, for their post Porzingis and ‘Melo era. It almost looked on the cards, or in the bag like his shot on the Late Night with Jimmy Fallon show. Where he bucketed a Knicks mannequin head (don’t ask) after trying the cap it wore on first to which Jimmy replied after he nailed it, “it must be the Knicks”!

Darius Garland completed the top five for the Cleveland Cavaliers still searching for that new Land owner after the King took his talents to Hollywood. The Timberwolves got the sixth of Texas Tech’s Jarrett Culver after a trade with the Suns that will soon be as official as the AD one. Whilst coming in seventh and eighth, the Bulls got Coby White and the Pelicans after a trade with Atlanta further their Lake Showtime future with two top tens and Texas’ blocking and dunking with a Texan name straight out of ‘A Star Is Born’, Jaxson Hayes.

Big in Japan. History was made last night in a draft that was already one for the record books as straight out of Gonzaga and now a Wizard like Harry in Washington D.C., Rui Hachimura became the first ever Japanese player to be drafted in the first round with the ninth. But don’t sleep on last year’s rookie out of Memphis, Yuta Watanabe who still has all the tools to be the future next to Morant.

But in one of the best drafts in recent years in a class of its own, there was so much talent to choose from in this pool that there was always bound to be players that missed the top ten cut, way below their deserved position. But just making it to the first block, Duke’s Cam Reddish taken at ten by the Hawks (who also have their talons in two top tens for their Trae Young lead future) still seems like a sleeper. This Laker fan who when we originally held the fourth wanted us to go with Cam or Manute’s son Bol Bol (second round slide? Really? This guy with the spiders’ web suit has the length and versatility to be a game changer). But just wait until this fire under him proves everyone (or at least nine or so other teams) wrong this killa season.

This draft is so Method Man abyss deep that it won’t just be the Pelicans who fly this season in Crescent City. With so much uncertainty this free agency at least some teams that hit the lottery have just the ticket punched for the future of their franchises with what the draft blew in.

But reaching the mount with Zion at number one is a gift from the Basketball God’s.