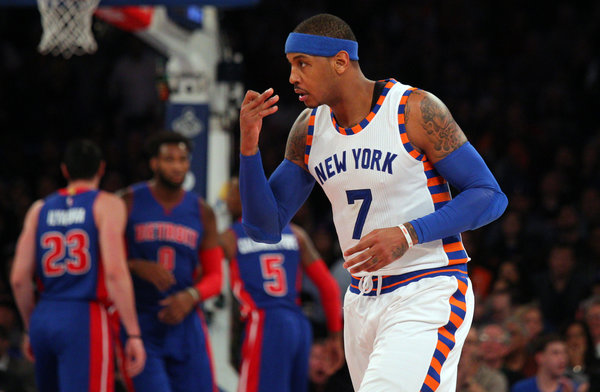 BasketballBuzz was in the Mecca, our Eden, the Worlds Most Famous Arena, Madison Square Garden last night. As were former Saturday Night Live comedian Tracy Morgan and Daily Show host Jon Stewart. Some of the funniest men on the planet as the Knicks showed they where no joke in a Christmas to New Year evening that was as New York, New York as the Pollack-esque Garibaldi, court canvas, halftime painting of old blue eyes, Frank Sinatra himself (you got to hand it to this young artist and whoever has to dry clean his suits).

Don’t look twice though because New York basketball in The Garden may just be the place to be like Times Square on December 31st going into the New Year as the ball is finally dropping for them. Even in a game where their Rookie Of The Year candidate sensation Porzingis and his big-man match-up with Liberty statuesque, motoring Piston Andre Drummond was like church mice in relation to the noise they could have drummed up.

Suiting up once again in those classic 50’s throwbacks that are selling almost as much as number 6 jerseys, these Knickerbockers played like a team that would make owner Phil Jackson’s old roster proud. Yet despite the Jeremy Lin, insanity like, albeit justified hype of more orange, white and blue, M.S.G. faithful carrying the six of Porzingis on their back, number seven once more had the upper hand taking his team to hoop heaven in the Garden of epic basketball.

This is still Carmelo Anthony’s team no matter if the future belongs to his dynamic duo, partner in crime. The former Syracuse and now Knick Orangeman is still the player introduced last and definitely not least in a revamped Madison Square arena and the Iron Man, Stark Expo like light Show pregame build up that is really something to marvel. It may be all new, New York for Derek Fisher’s Knicks, but the man who sacrificed it all and has been with this big, sometimes rotten apple team though thick and thin is not clutching at straws…especially short ones.

24 points, 6 rebounds and 6 assists was a classic line for ‘Melo who calmed down the charging Pistons with key buckets and stops, looking to pass Phila legend Hal Greer on the all-time scoring list, whilst showing in his history making legacy he is still definitely one himself. As New York as Pat Ewing or Bernard King, sitting on his throne in the Mecca, ‘Melo isnt just one of the greatest Knicks, but one of the all-round best this game has ever seen. And now with Porzingis we and he may finally get the contention run Carmelo has always deserved for one of the NBA’s most recognizable franchises in the Worlds Most Famous Arena.

But last night the stage set and the night falling on Manhattan was Anthony’s. Although he did have plenty of help from the team he needs to take and be took to the promised land of the playoffs. Seemingly ageless and limitless quick guard Jose Calderon (Canadians remember him as a Raptor in Toronto? 10 YEAR AGO!?) was falling it with 8 first quarter points, whereas new big and bridge brother to Brooklyn’s Brook, Robin Lopez had a twin 8 of his own to go with 5 rebounds and 4 monster blocks. But how about the stuffs from Derrick Williams? Who iced his 18 points and the Knicks win with two monster dunks in rapid succession as raw and crazy as his dreads.

With this game on lock the Knicks have ended their latest streak that had them sliding like three burgers on a diner plate. Don’t look now, because they could change their losing culture and the state of mind in this concrete jungle in a New York minute. In the city that never sleeps these mellow Knicks are finally waking up!