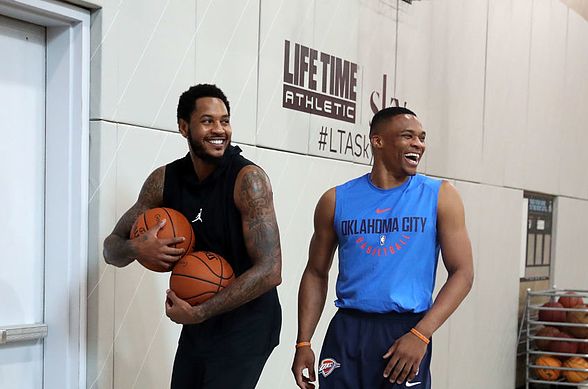 Leaving on a jet plane from NYC’s JFK, Knick king Carmelo Anthony looks back on New York’s M.S.G. The Eden of the borough of Manhattan seemingly just a few blocks from Central Park and Times Square, bookended by the skyscraping buildings of the Empire State and the Freedom Tower. With the skyline in his rearview, ‘Melo looks back one last time, pulls up his hood ready for his red eye and says to himself…”the city was mine”!

But as his Boeing takes off from the runway the roar of the engines almost sound like Thunder.

OKC has just become “OK3” as there is a new dubbed big-three in the town Kevin Durant left as a free agent, leaving to chase a ring he ruled with all of the Steph Curry, Klay Thompson and Draymond Green Golden State Warriors.

Following their almost one-sided trade with the Indiana Pacers for free agent to be Paul George. O.K now have another superstar player to join their reigning MVP, as the Knicks have just OK’d a trade to send their New York finest legend Carmelo Anthony to the Oklahoma City Thunder for a couple of decent players and what amounts to chump change.

In a superstar charged power move for a big-three of Nike air apparents Russell Westbrook, Paul George and Carmelo Anthony, the Knicks get talented international star in the making Enes Kanter, smooth shooter Douglas McDermott and a second round draft pick in 2018. But in losing their hometown hero from Syracuse, the orangemen look to freshen up the big rotten apple at its core. The Knicks are now Kristaps like Dallas is Dirk’s with wide international appeal. But the ‘bockers glory will have to miss out on a few more 82’s of W’s before they rule the L.

In Oklahoma on the other hand of this trade however, OKC are good to go. This ‘Melo move is just the calm before the storm. Get ready for the Thunder to reign.

As Carmelo goes from orange, white and blue, to blue, white and orange, Oklahoma now have three of the best players in the association. Definitly the first quarter of the top 100 no matter how ESPN ranks it. And now with Westbrook, Anthony and George and a cast of great role playing veterans lead by New Zealand Kiwi Steven Adams, the Thunder can weather the Texan titans of the San Antonio Spurs and the new James Harden and Chris Paul Houston Rockets to become the closest team to knock the Golden State Warrior kings off their throne. And if Russ really exacts revenge on K.D. they will play whoever got the better end of the Kyrie Irving/Isaiah Thomas trade from last month. The storied Boston Celtics and King LeBron James’ Cleveland Cavaliers.

Looks like the Eastern and Western Conference Finals will be as exciting as the actual Larry O’Brien round in the playoffs for the next couple of sensational, storybook scripted seasons.

And do you really think L.A. native Paul George will sign with the Lakers now come next year? Or even U.C.L.A grad Westbrook?

The National Basketball Association’s Most Valuable Player now has two more who will now call the city of Oklahoma home for more than just a quick spell of Thunder.