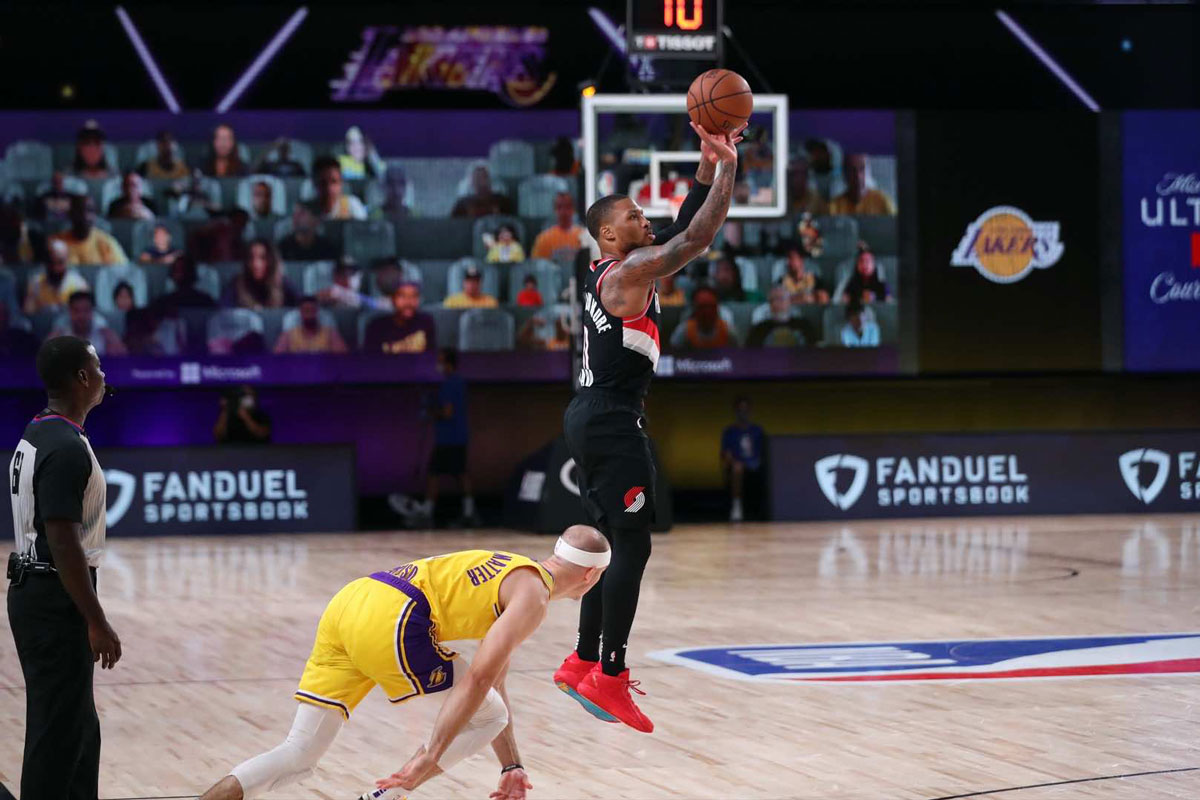 With no fans in the stands for the quarantined NBA Bubble, the echoing noise the bouncing ball makes against the hardwood sounds like a plastic recycling trash can rolling down the street.

Which was kind of what the Lakers were like down the stretch against the Portland Trailblazers in Game one of the first-round of the NBA playoffs in this wild west clash.

In need of a tune up, they looked as off as those new Tune Squad, ‘Space Jam 2’ jerseys that LeBron debuted on Twitter yesterday. C’mon guys at least keep the Michael Jordan classic logo. The Lakers haven’t changed there’s in almost 60 years. That’s because you don’t mess with a classic.

LeBron lying on the floor in the above photo to conclude the contest said it all and was different than how Book looked in the same position for the scorching Suns. Who almost unbeaten lost this potential eighth seed to the blazing Blazers.

Now it looks like last place is about to upset first place. Just like a smiling Dikembe Denver against a Sonic Payton and Kemp, lifting the Spalding to the heavens like ‘The Lion King’.

This was always going to be a series. Especially with Dame Time on point like 12 o’clock (everyone apart from Skip Bayless always knew that) and Carmelo looking for revenge on everyone who snubbed his legendary talents like the Lakers (everyone outside of the Twitterverse eventually knew that).

We didn’t know however that it was all going to start like Iverson stepping over Lue in the 2001 Finals…and we’re not sure the Lakers can rebound to take every game like they did way back then. This looks as scary as the Pistons faces when they won the 2003 Eastern Conference championship before they faced Shaq, Kobe, Karl Malone and Gary Payton and then showed the world their Hall of Famers.

Still LeBron has come back in seven game series worse than this. Giannis’ best in show Bucks dropped their first one like a debut album too. Let’s not write the obituaries yet. Still it’s time to put even more respect on that name.

More than Dame is on time for the PDX who want to make this series as Rip as their city. Logo Lillard may have been clocking game from all sorts of Jerry West places, but the rest of the Blazers were hot in this Florida saloon too. It’s time to stop calling them trash or scrubs in an effort to bag and write off the Lakers more.

Sure Hollywood was as embarrassing as one of that industries tired remakes and reboots tonight. As watching the final minutes of this game was like watching one of this writers dates, but Portland earned this. Don’t discredit that. Or disregard them.

They beat the Lakers fair and square, drawn and quarter over four in this game of thrones. One that even with the King can show that heads and crowns can roll anywhere.

James who led his team in wearing red hats that read, “Make America Arrest The Cops That Killed Breonna Taylor”, had a jersey 23, a Rick Fox 17 rebounds and a sweet 16 assists. Whilst Anthony Davis played like a man possessed above the rim with a deuce/deuce of 28 and 11. Even Kuzma continued his flexing big-three form. Still, with reigning Raptor champion Danny Green now with the Lake Show and as cold from downtown as Toronto, Canada. Even a classic Carushow dunk couldn’t put the beat back in these purple hearts.

Plus no J. R. or Dion with the Philly cheese? Wasn’t there a reason the Lakers picked up these big time players for the playoffs?

Must Read:
Look What The 2016 NBA Draft Blew In

Dame led the way with 34 dollars. Carmelo mellowed the Lakers with big shots down the stretch to tap your temples twice too. Now how can you write off a team that doesn’t just have one of the best back-courts in the league in Lillard and CJ McCollum, but also one of the most formidable front-court forces in Hassan Whiteside off the South Beach block, swatting everything and Jusuf Nurkic (16 points and 15 rebounds) knowing what time it is as he banged with Dwight Howard in Orlando?

“Every game since we’ve been here has been a playoff game. So that prepared us for a game like this,” Lillard told the press after dancing his way to victory. “It’s only one win. I’m happy to be here competing in the playoffs again, but we’ve got to move on to the next one.”

LeBron and the Lakers plan to wear the Mamba snakeskin black jerseys Kobe designed a few seasons back in the next round. All in memory for the late legend and his daughter GiGi with an added number 2 heart above theirs. Sadly, they may not make it that far if they keep playing like this.

Time to leave a lasting legacy.

Game one in this chess match was all about the Blazers like school uniforms. Advantage Portland. Dame takes King.