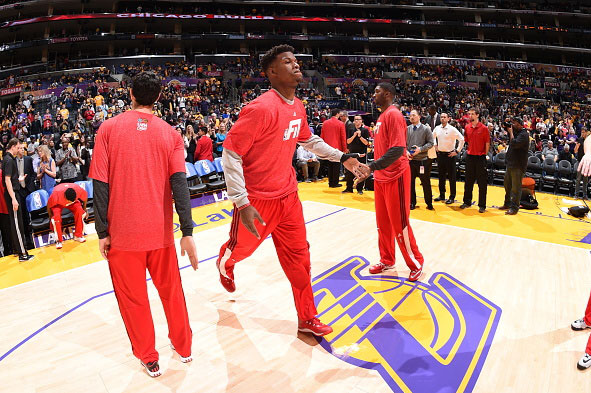 Buckets of contract offers are about to fall on Chicago Bulls swingman, superstar Jimmy Butler’s front porch like sheet rain come this 1st of July.

Yet by the fourth, there may be fireworks in Hollywood. As last years ‘Most Improved Player Of The Year’ wants to take a breeze from the Windy City and escape to L.A. for a calendar year at the least. Aligning with the small-ball revolution Kobe Bryant’s Los Angeles Lakers have now joined like their neighborhood Californian champion Golden State Warriors after drafting D’Angelo Russell with the second pick in this weeks NBA Draft, instead of big-man Jahil Okafor to join last years rookies Jordan Clarkson and Julius Randle. Opening up a spot for their big-man hole in this years free agent market.

One that likely won’t be filled by the opting out Kevin Love who intends to re-sign with the Cleveland Cavaliers, especially after having a pool-side sit-down with LeBron James (another in the long line of free agents who have opted out, but only really for financial decisions. There’d be a much bigger deal made if LeBron was even considering leaving home again) just today. Or the Lakers former pick Marc Gasol who was originally traded to the Memphis Grizzlies as a package for his brother Pau (now Butler’s teammate in Chicago), who according to Mike Bresnahan of the Los Angeles Times won’t even consider returning to the STAPLE he never suited up in due to how the franchise treated his brother in his final years before his own free agency last year. That’s karma for you after all the championships the older Gasol brought with him to the city of angels and how L.A. repaid him in turn. Offering more money than Chicago was too little when it was too late.

It looks like the big contract will be offered to Trailblazing Portland player LaMarcus Aldridge. One of the best big men in this open market. Yet it would probably be in L.A.’s best interest to not actually join the city that shares his initials, but instead Timmy’s town where he could eventually take over from San Antonio Spurs legend and greatest Power Forward of all-time Duncan as only a player of his quiet, but deadly demeanor, similar type could do. Then of course there’s always DeAndre Jordan (it’s not like the Clipper would have to change arenas, just lockers) and the bait of that big but ill-advised Cousins trade from Californian relatives Sacramento if Aldridge does not become an L.A. king.

So with Kobe, the future franchise big-three face of Russell, Randle and Clarkson and a big-man front and center, Butler would serve as more than the complimentary piece that makes this team contention complete. Maybe even with a veteran All-Star like Dwyane Wade joining a brilliant bench of whoever this team can keep from last years Nick Young, Jeremy Lin, Ed Davis, Jordan Hill and Wesley Johnson pool of talent that will make much better bench players for a contender than starters for an eliminator. Still, this out of this world talent is so restricted downtown L.A. may as well be Area 51, because if the Bulls will have it this kid isn’t leaving Illinois. Still, with a prickly relationship with championship charge leading Rose, who is the bouquet of Chi-Town, it may be in the franchises best interests to part with Jim. Although Buckets water-wet shooting makes him one of the most improving and striving stars in National Basketball. Associated with the likes of Rose, Noah, Gasol and fellow Spaniard Mirotic (who at a veterans age and experience is more than just last years second best rookie), the Bulls on paper have a squad that could team-up for a championship, especially if they keep Butler for as long as they can in another year before he’s free to go wherever he pleases.

A year where someone else by the name of Kevin Durant will be in exactly the same position, with more than the Bulls and Lakers fighting over him like he was the legacy of the best years of legendary coach Phil Jackson.

Butler may be at neither teams service come next year, but as of this upcoming one where will this household name respond to the call?