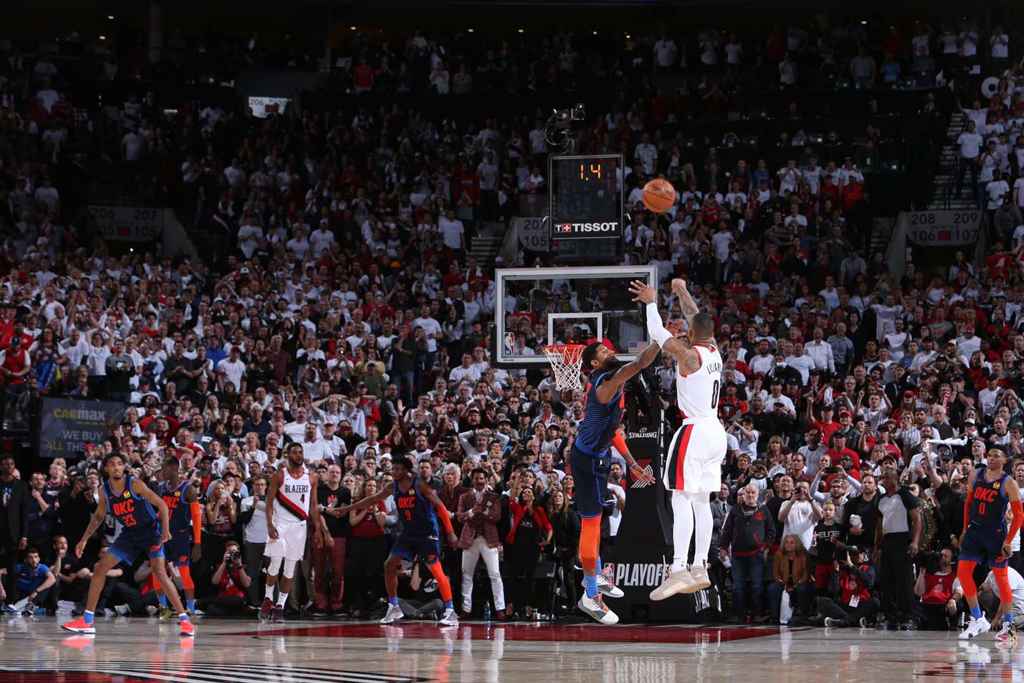 Even two games down the Thunder bolt boys joked like the last laugh that was yet to be delivered, like this what’s the 4-1 punchline. Zero to zero for the best series of these NBA Playoffs so far, Russell Westbrook rocked the baby at Damian Lillard, before mocking his wrist watch celebration like he did Laker meme Lance Stephenson’s air guitar strumming one with D’Angelo Russell ice in his veins. All before Paul George double pumped a dunk as time expired on a game that was already decided way before the horn blared.

“It is the unemotional, reserved, calm, detached warrior who wins, not the hothead seeking vengeance and not the ambitious seeker of fortune.”

But then last night before posting that Sun Tzu quote on Instagram in this art of war. In the face of P.G. the PDX P.G. beat the buzzer as Dame Time struck from way downtown RIP City. With an Austin 3:16 bottom line to give OKC the history engraved tombstone and the Portland Trail Blazers a legendary storied, legacy making championship belt for this classic series in hardwood history.

Reminding us of that time Charles Barkley responded to a Nike barbershop ad featuring former Golden State Warriors Chris Webber and Latrell Sprewell joking about dunking on him by putting all the points on them in the following game and running past them on the bench draped in dejected towels shouting, “put that in a f###### commercial!”

Colder than February. More ruthless than a convertible in Summer.

37 feet high and rising from deep. Deep as the halfcourt abyss. With the this time of season cherry blossoms blooming outside Portlandia’s Moda Center, the City of Roses was handing everyone from basketballs Oklahoma home funeral flowers. And leading the precession, hearse wrapping it up like his killer bars, Dame D.O.L.L.A was right on the money like exact change only please, waving goodbye. Even if Paul George walking off in defeat like LeBron James and getting his Vlade Divac on in a press conference more awkward than a blind date with an ex called it a “bad shot”. To which the great Dame simply replied with a tweeted “lol” (see also, laugh and last). He better Big Shot Bobby Horry check a newspaper or something. Dame Time didn’t just beat the buzzer. He took baby powder to it. As Dame had all the Louis Armstrong time in the world with ten on the clock and the last shot in this final frame to dribble drive or dish. But instead, toying with George like a cat does a mouse, as David beat Goliath like Jerry did Tom, Lillard had the sand to set up shop, his spot and his shot from what looked like a bunker. A hole in one, with the cocksure confidence of Tiger Woods putting for Masters glory in Augusta and embracing his kids, two decades after doing the same with his pops all for the green jacket.

Must Read:
Isaiah Thomas Is The Next Boston Celtics Star! How Great Does That Sound?

From this master, like a tap in putt with no Mulligan to carry, this was always going in. Nothing but net. All water like those Thunder tears. O.K. now that was a 3.

And to think I swore I wouldn’t go back on social media until after the new Avengers movie came out, but DAMN Dame Time! Spoiler alert, this is the new ‘Endgame’ now.

Cousy. Pettit. Sam Jones. Wilt. Chuck Barkley. M.J. And now the Dame train as the legendary Lillard goes hard to join this lineage as the only players to hit 50 in a playoff clinching game. And what a way to do it, fading away to clock out of the game and series 118-115 for the greatest Portland playoff moment since the G.O.A.T’s shrug. As mobbed by teammates on the floor he sank into, telling Russ to ‘Get Out’ his house. Peeling off like Jordan, Damian all on his own like a devil, GIF turned into an instant meme, as he turned the Thunder into a memory (you know the one were everyone loses their mind around that smirking kid with glasses in the raincoat? Well now guess which superheroes face is super imposed?). Staring into the camera with that look you know was for Russell Westbrook.

What a whole mood.

Whose left holding the baby now?

Dame didn’t even have to check his watch. Why? Him, her, them. They all knew what time it was. His. As Dame Lillard just did it in the Oregon home of Nike. Shoe dog like Phil Knight, running off victory for the courtside crowd, including legendary comedian Cedric the Entertainer for this last laugh lap. As this Gladiator hit one of the best and biggest shot fired in NBA history. Subliminal and literal.

Are you not entertained?