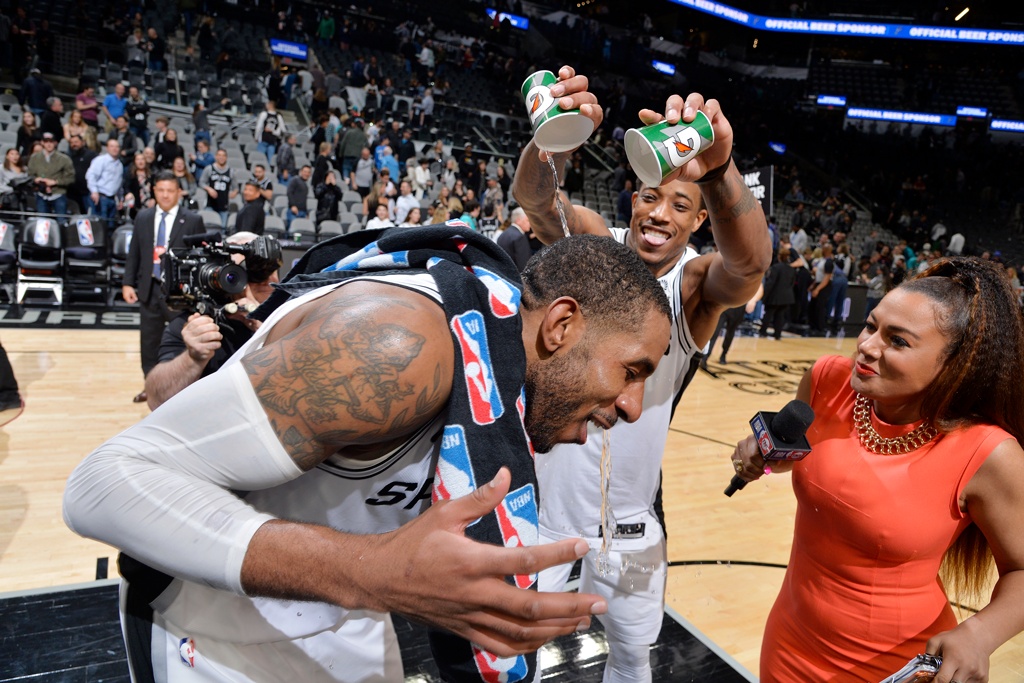 Every month an American friend kindly comes into work with USA Today basketball article newspaper clippings sent from the States for me that I read and keep in an Air Jordan shoebox under the bed to fuel that fire (reading breeds writing). But nothing could prepare me for what hit my desk this morning.

You can say that understatement of the year again.

LaMarcus Aldridge and Russell Westbrook. Two Goliaths of this game of God’s putting up Wilt numbers as their teams did the same on their stilts.

Now if you thought one of modern day and for all times greatest, storied franchises in their post, original big-three and Kawhi era were done. Think twice. And if you thought one of the last great big men and Tim Duncan clone LaMarcus Aldridge was a mere past afterthought, he has 56 points to go along with 9 rebounds and 4 assists blocks to tell you different. No one in history has scaled these levels.

The amount of All Star votes he’s going to get this morning. The ballots are about to go Gaga like a star reborn Spotify streamer. Dominating the whole four quarters and two extra bits of change, on both ends of the hardwood from on the floor to above the rim, tip to horn. Only the Iceman (George Gervin’s 63) and the Admiral (David Robinson’s 71) have recorded more record book engraving, box score points in a Spurs uniform.

Now how’s that for the coldest big-three? The last guy to come close was a decade and change ago with Tony Parker’s 55 in ’08. Welcome to the over 50 club L.A. This season a welcoming Stephen Curry, Kevin Durant, Blake Griffin, LeBron James, Derrick Rose, Klay Thompson, Kemba Walker and James Harden(s) await.

But despite the clicking Spurs winning this dueling draw you have to give it up for the six shooter they roulette with. The Thunder weathered a 16 point defecit and the Spurs almost gunning every downtown shot (although in this three free-for-all Aldridge became the first player to hit at least 56 in nothing but paint and just outside those lines since Shaq’s 60 in the year 2000) to almost come up with the $10,000 reward near the Alamo in a night banked at the AT&T.

This is the kind of contest were only one can take home the W but everyone is a winner. And in the game of the season out in the wild, wild west, Oscar worthy Russell Westbrook put up Robertson royal Academy numbers too. The triple-double machine doesn’t just average one, he obliterates one. Here writing his own for the record, storied chapter of 24 points AND assists (the most high since Rondo’s 25 passes in 2017.

Now call that selfish) to go with a lucky for them 13 rebounds off the glass as he shattered all these unbreakable records with a split. The first player to ever do this, beating the 1985 record by Bad Boy Detroit Pistons, Isiah Thomas who recorded both 24’s but 10 rebounds the year this writer was born. Almost 34 years ago…yep I’m old. And this guy is cold. Now in 20-10-20 vision Westbrook’s two trail the totals of only Magic and Oscar at three.

Now how’s that for a big-three?

Combining for 301 points both teams offered mathematicians a statistician’s dream last night by the numbers, doing the books. And with sidekick superstars like DeMar DeRozan and Paul George hitting 16 and 30 respectively, young guns like Horace and Harvey’s Jerami Grant for OKC (25 points) and the Spurs Derrick White (23) marked new career highs. But when it all came down to it in an association were some teams don’t even taco break 100, it was all but one of Aldridge’s total points over a century that lifted the Spurs over the reign of Westbrook’s Thunder out West.