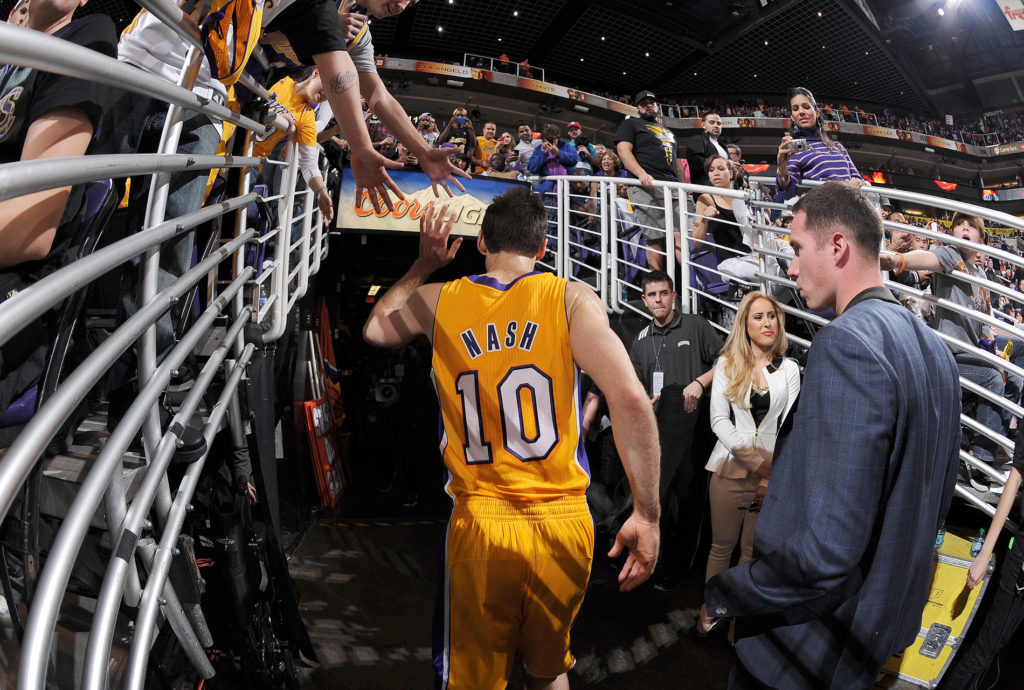 Can you feel that? Cold isn’t it? The ice hangs off his knees like it does off your cars right now. It’s been one hell of a freezing fall to February, but no one has had a winter as cold as the Los Angeles Lakers. Who knew the polar vortex would hit Southern California too freezing over everything this side of downtown STAPLES not named Clippers? This is Lob City right now as the purple and gold banners give way to the faces of the players their sister team have now taken starting with the nixing of Chris Paul. If that wasn’t bad enough the face of L.A. and the league Kobe Bryant has given way and months of the last years of his career away to two infuriating injuries, while his sidekick Pau Gasol has faced his own physical and critical injuries. Things are looking Lamar Odom bad for the rest of the franchise as even their fresh new stars like Nick Young, Wesley Johnson, Jodie Meeks and especially Xavier Henry have faced the rawness of the tough leather of the medics table. Thank God for guys like Manny Harris and Shawne Williams. Got the point or do you need Jordan Farmar and Steve Blake to miss time at the P.G. spot too? A Point Guard spot that was supposed to be led by Steve Nash, the last member of the Lakers big three. Still, even Nash has been battling a roster list of injuries that will see his 40 year frame most likely retire at seasons end and he’s been battling through the most pain. It’s colder than Sochi right now. Will we ever see the end of this bleak Winter?

Hold the front page! Steve Nash isn’t frozen up in a Steve Rodgers block of ice just yet. The cold never bothered him anyway. Coming back it’s time to thaw the first Avenger. Besides Captain Canada has risen from the cold before like a Phoenix as a double MVP Sun. His time under the yellow ball with the orange one isn’t set yet. We want to see ‘The Winter Soldier’ throw the ball up to Kobe Bryant as he flies to the rim like The Falcon. This may not be Lob City, but it’s still the town that Magic Johnson built right? The Showtime must go on, World Peace or not. No Rocket take off should ground the team Dwight Howard dumped. Jim Buss playing poker up there with Jim Murray and Chick Hearn needs to be able to bet on his Lakers. It’s time for Steve Nash to take the shield and lead the way for L.A. like he carried the torch in more ways than one for Canadian Basketball, way before the Anthony Bennett’s, Corey Joesph’s and Justin Jackson’s. Way before the 2016 All-Star Game or ‘Drake Night’. Right there at the start like the Toronto Raptors and Vancouver Grizzlies. Starting the new era of up North hoops like Basketball Buzz. Don’t just wait for the Nash documentary witness Steve in all his old glory before its too raised rafters late.

You’re going to want to see this. Like the skateboard player hair or the soccer skill dribbling. The pinpoint, pure Point passes. The mid-range shot as automatic as a free throw. He may aswell have a robotic arm. The three pointer you didn’t realise was so pure. The pace even at his age. The mastermind Magic vision on court. Serving the game like Samprass. As classic as a Jay-Z reference. The best to ever do it since Pistol Pete. Bang goes a Mavarich Marvel. The Basketball sixth sense that turns former All-Stars into veteran scientists of hardwood. The professors of the game. It’s an education for those rookies…take note! Ever since the kid born in Johannesburg, South Africa and raised in Canada with a dual British nationality (that’s where the soccer skills come from, he’s a Spurs fan and we aren’t talking about San Antonio) headed due South to the National Basketball Association of America (and a little bit Canada), Nash has bridged the gap and opened up a world of possibility to this sport. His game…and today he’s still in it.

The Santa Clara grad has still got one more year in California and he’s hoping to reignite his big three with Kobe and Gasol like the ‘Nellie Ball’ fun he had with Dirk Nowitzki and Michael Finley in Dallas or the STAT, Matrix dunking one he had with Ama’re Stoudemire and Shawn Marion in Phoenix. The perfect 10 may be bringing his former number 13 jersey luck to the Lakers, but the eight time All-Star, five time assists leader has a lot more with him to carry on his 6,3, 178 pound, giving out back as well as his depleted team and sick note status. You can’t even begin to understand the pain he’s going through, like you can’t even under stand the power he has to make it through. Basketball doctors are giving his career just weeks to live, yet the Maverick legend is defying all medical odds like the Dallas Buyers Club. I got a newsflash for you, there aint nothing that can take Stephen John Nash out in 30 days. They just don’t understand. In this sport almost nobody does, expect maybe that number 24 who tried to push his torn achillie back into place. That’s hardcore. That’s greek God stuff. If Kobe’s one of them then Nash is a gladiator. Thumbs up? Are you not entertained?

From the corridors of his classic high school career with British Colombia to showing he is a dead cert for the hall during his MVP, quarterback run with the Suns in Arizona Nasty Nash causing mass area hysteria has been a legend in this game like ‘Illmatic’. ‘Stillmatic’ to this day he is still on top of his game, it’s just the cruel hand of injury and ignorance that’s putting him to critical shame. He can count the likes of both Barack Obama and Bobbito Garcia as devout fans and followers. With a playground skill set and the demeanour and manner to be player president it may all be about Chris Paul, Deron Williams, Kyrie Irving and whether Derrick Rose comes back, but in his day, no one was messing with Nash. His week isn’t over yet either. Quite simply he’s not only one of the best Point Guards in Basketball of all-time, but one of the sports best players ever too. The nerve or root damage aside, this guy strikes a chord, all the way down to the heart. That’s why he’s still got the soul to survive and play ball. Just to think Suns fans used to waste their breath booing him in his rookie year after being taken with the 15th pick. Now he’s beind named in the same exhales as Magic Johnson, Michael Jordan, Bill Russell, Wilt Chamberlain, Kareem Abdul-Jabbar, Moses Malone, Larry Bird, Tim Duncan, and LeBron James. That’s most valuable.

“Frustrating” may be how Nash has described his recent suit and tie prone play but the purists still love the performance. If this game is poetry then he is the motion and his 19 point season high in Philly on his 40th birthday show he can still play amongst the grey. If this is his twilight in his time in the lime then some may be disappointed they didn’t see a Canadian homecoming with the Toronto Raptors. Still its his Pacific Division reunion with Coach D’Antoni that is special even if the “run and gun” has given way to lactic acid and shell fragments. Besides Nash isn’t ready to fade to the black of a ‘Hollywood Nights’ jersey just yet. There’s still some maple in this old leaf…save the syrup. Even if there’s no playoffs, let alone finals there’s still a season to play and for Steve Nash it may not end in a championship but it will still conclude with a celebration. This is his time and this is still his game. The legend and the legacy may not end in a ring, but some with ‘chips to shoulder could never circle around what this guys done for the Basketball world. Give him a couple more rotations and he’ll show you like instant replay all the history that is he. There’s more then ice rinks floating round Canada. There are hoops all over he country to. These are the courts that Steve Nash built. This is his foundation and its only just the beginning.