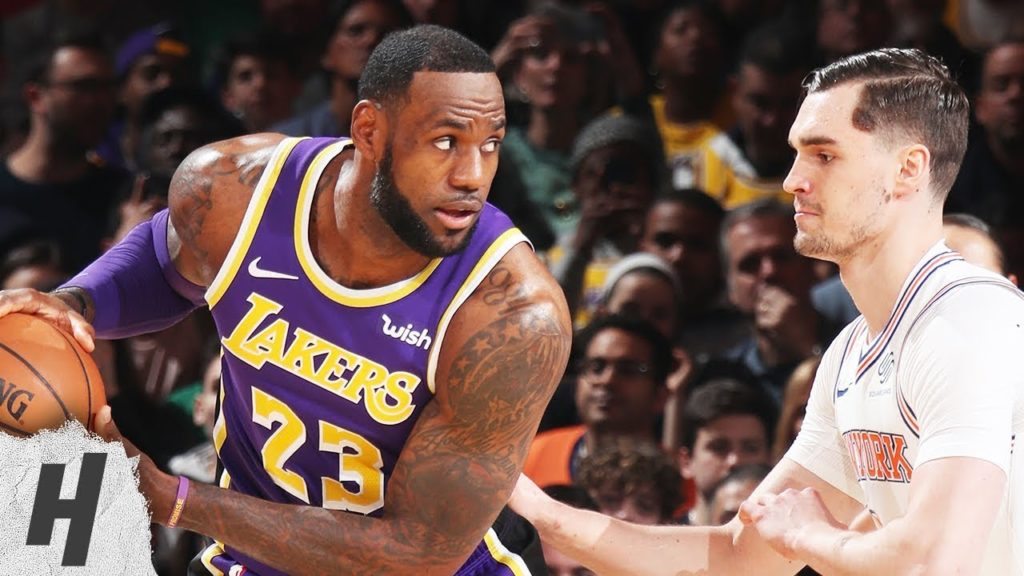 The King's Garden Bites Forbidden Fruit In The Big Apple

On a Sunday afternoon in New York’s Madison Square Garden this St Patrick’s Day (side note: Nike need to bring back those great green Paddy’s Day NBA uniforms), the Lakers where in their East Coast equivalent big city to pay a visit to the Knickerbockers Mecca.

M.S.G. usually plays host to the greatest games from the G.O.A.T.’s over the generations out the service elevator. M.J. Kobe. And now L.A.L. legend to be L.B.J. against the N.Y.K. And LeBron James didn’t disappoint with a Kareem 33 points off devastating dunks off rampaging runs down the floor of the World’s Most Famous Arena like a raging bull. Shouting “AND ONE” on foul calls that even people with bleeding noses sitting up in the Gods could hear (and how about a couple plays before an equally as loud Caruso yelping for the lay-up as hilariously as his “what’s up man, I’m Alex” Ringer soundbite spoof? But 5 steals and 3 blocks to go with that many rebounds plus add that up “AND ONE” for 12 points in the game? Never send him down to the G again). That was until he took the final shot at the horn that blared in his face.

It’s been that kind of season for the King by royal appointment. Anthony Davis and potentially missing the playoffs and all that.

Heavy is the head in this Game of Thrones.

Like Jordan vs Kobe, the Knicks came away with the 124-123 win. And in the clutch, the King going for the game’s crown slipped as he ended up looking as good as one of his free throws. Driving the lane and taking it to the rack before being denied by the Knicks Mario Hezonja. Whose interlocking defence left the dip of ‘Bron in a honeycomb like the new amazing Vessel art sculpture structure in NY’s Hudson Yards. Mario plumbing the big block became the Knicks new right-hand man.

Must Read:
LeBron vs Zion. A Tale Of Two Cities

Off Broadway the King tried to Kong his way up the Empire State. But this time the Bi-Planes normally swatted away shot him down.

‘Bron isn’t the only one who makes clutch blocks as big as a buzzer-beating basket. Sometimes others hold it against him.

The Lakers 31-39 record is staring down elimination on the wrong side of .500. And with the game down the barrel L.B.J. went for the fadeaway like M.J. but couldn’t come up with ‘Space Jam’ too. As a matter of fact after a big game against the rotten 14-56 Knicks (on the free-falling off the Chrysler wrong side of .500) where he also collected 8 rebounds almost on his way to a double/double, LeBron went fourth and colder in the final quarter than a text back from your significant other that just says “fine” when you ask if they’re ok and how their day was. With just four made baskets in the fourth period and the Lake Show missing their last six attempts it was all fat lady in Manhattan come the early evening afternoons end.

Right about now with most teams claiming their playoff berth, last year’s finalist and all the King’s men are just getting worse.

Even with a Garden state of mind in New York, New York, the King couldn’t keep his Empire going like Jussie Smollett.

Now there are only a few more notes before she sings again, but this time for the last time.

And that will be all she writes.

Time for Hollywood to hit the road and flip the script.

Every good movie ends with a twist.