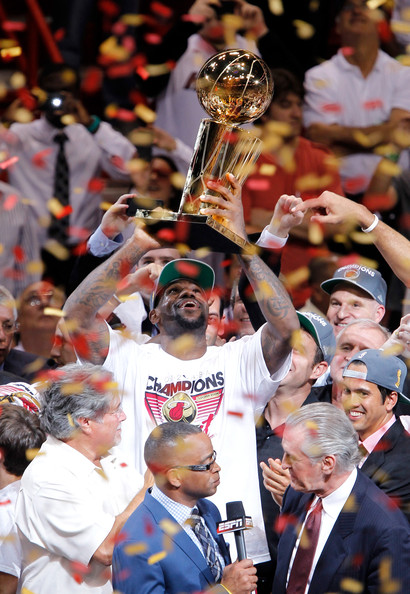 The Lebron Series – The King Takes His Throne Again

This NBA ‘Game Of Thrones’ belongs to LeBron James, as in this series the king takes his throne again. Congratulations to the 2012/2013 NBA Champions, the Miami Heat, back-to-back winners as LBJ looks to his own dynasty, chasing down Kobe Bryant and Michael Jordan for rings, legend and legacy. The already wrote off critics won’t have any more ink for their tainting judgement now. Anyone who said Lebron couldn’t do it in the closing minutes are now clutching at straws…short ones at that. LeBron’s drawn the best, shot down all notions and the Wild West Spurs and the cameras are now clicking at the man holding both Larry O’Brien and the Finals MVP award. He.Is.The.Man.

Just look at that face…point proven? Just look at the bowtie, cigar chomping Bob MCAdoo behind him…legend approved. Championship certified…once again. Not one and likely not two…so how many more? The three kings of James, Wade and Bosh are ruling the record books like R&amp;B supergroup TGT (Tyrese, Ginuwine and Tank) are about to own the charts and it all sounds so, so good. it’s never felt better. ‘Bron and his boys even managed to say so long to the legendary Tim Duncan led San Antonio Spurs who have been hanging around the Finals for decades now and have never lost in the NBA’s biggest stage…until the hot Heat cooled them off with homecourt advantage, set, match and series. LeBron served it up like Sampras on a dish of revenge for the critics best served white hot. ACE! As cold as dry ice, those looking to see veterans have their day better watch ‘Space Cowboys’. It’s this young mans game now…he’s out of this world.

All due respect to the great San Antonio Spurs however, who almost deserved their rings as much as the talents of South Beach, but at the end of the day the deciding factor was LeBron James. Tim Duncan may have furthered cemented his iron-will, robot prototype player at the greatest Power Forward of all time, Manu may have made everyone man up and Tony Parker may have almost ran everyone off the court, but nothing could keep up with the King once he straightened up his crown, loosened up his tie and stepped into the booth and got his Man Of Steel on like Shaq back in Miami. Superman is alive and kingdom came for the royal appointed and all his men. Knighted by royal decree once more despite the rocks that where thrown at the throne again. Like the big shots taken by Danny Green who almost made this his series and MVP. He made bigger moves than Jay-Z at halftime in this Finals, but when it was all said and done the ‘Magna Carta Holy Grail’ belonged to LeBron and his holy trinity. ‘Yeezus’ Christ, everyone will be watching the throne now…this is the sequel.

The championship cap fits like a crown…everyone else is wearing tiaras. Still, LeBron couldn’t do it on his own and the kings men didn’t just end with Dwyane and Chris. Jesus Shuttlesworth how about the clutch of Ray Allen? The dogged defence of Shane Battier? Or the epic enthusaism of Chris Anderson? You hear the birds calling? The once haters tweeting love again. From Mike Miller to James Jones shots and Chalmers to Cole, or dependable vets like Rashard Lewis, Juwan Howard and Miami champion survivor Udonis Haslem everyone deserves their t-shirt soaked in champagne. It’s a celebration and 1 through 15 deserve their toast on their road to glory. What a team, what a leader, what a season, what a legacy. He is legend. Pass the cigar, hold the talk, LBJ has smoked them all. he had more in the barrell then you thought against the clicking Spurs. I guess everyone else was shooting fish.

When this series switched games and winners nobody in their right mind knew what would happen but this is what makes the against the odds win by LeBron James and his Miami Heat that much sweeter and that much more deserved. Second rounds on you LeBron joining Shaq, Kobe and Hakeem as the only back-to-back Finals MVP’s. That’s elite company, that Lebron’s always deserved an invite to join. he’s kicking the door in now with his notorious and B.I.G. play, more championships, no problem. From his pivotal, Game 6 change of the scales play to now, tip of the cap to the man of the moment. The only team in this series to win back-to-back games became back-to-back champs. Spo’ must be so proud, even Pat Riley’s slick hair stood on end like goosebumps. He doesnt even have to promise another one next year…James will guarantee it, while the towel will be in the doubters mouths. He is worthy. It’s his showtime now.

The Jordan chaser, Kobe replacer proved his game was Magic like Earvin in one of the most epic and legendary Game 7 in salivating NBA Finals history. A career high percentile from downtown Miami (40.3) complete with an M.J. shrug, LeBron beat it all like Jackson, Phil couldn’t have dry-erased it better. The Finals chapter belonged to LeBron James as he rewrote his own story shooting jumpers that no one thought he could, accepting San Antonio’s dare and showing he was the truth with piercing play. Getting his Robert Horry on big shot ‘Bron made history and engraved his name into more NBA hardware and torched it into the history books…now whose burned? LeBron chipped away at the Spurs as his teams name was being done the same into Larry O’Brien for a gold coronation that shined brighter than a diamond and tasted better than champagne.

Right now LeBron is platinum status. Millions watched, over a billion critics served with the words out their mouth tasting worse than junk food. Now hows that for sustenance? Hows that for substance? Beyond the style have you had your fill? LeBron’s making everyone eat their words like Ali. He’s the champ, going round after round in his own ‘Rumble in The Jungle’. From the concrete to the hardwood, with a champions heart pounding the rock, with a bigger ring on his finger. The courts have decided it…right now he’s the greatest. The buzzer has rang, the belt is his as is the game ball. 37 points, 12 rebounds one more ring and no more talk. Done and dusted like the chalk he tosses in the air. Game over. Season won. Critics gone. Here’s to LeBron once again.