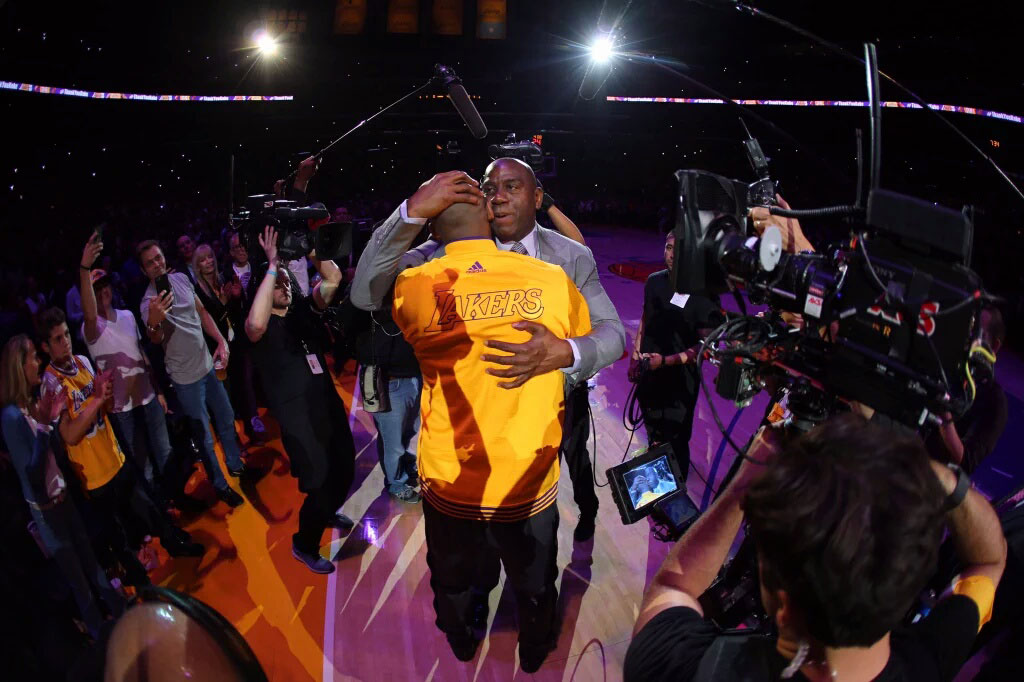 As Warriors Break 73, Kobe Hits 60, Silencing All That Jazz In His Laker Swansong

Yep you read that right 60!

Take it in for a second.

The NBA career of Los Angeles great Kobe Bryant is over now and after the farewell tour of a final season, his homecoming held something special before he closed the door for good.

Last month former teammate and partner in dynamic duo, history time Shaquille O’Neal challenged Bean to score 50 points in his final game to become the oldest player in NBA history to do so. But you just know the man who is greater than top 50 all-time had to go one better…or ten better. Because that’s the top of where he belongs.

When Kobe was a rookie him and Shaq’s Lakers were swept by the Utah Jazz in the 1996 playoffs, before the Jazz met a 72 win game champion Chicago and Bull and league G.O.A.T Michael Jordan in the finals. Last night Kobe’s 60 point, high note farewell that silenced the Jazz 101-96, outscoring the entire team all by himself, avenged all that in a night were even the five star, eagerly awaited ‘Captain America-Civil War’ reviews couldn’t take his gold shine and top trending timelines.

It looked like the five time world champ and two time Olympic Gold medalist was trying to break his own 81 point record out there. A decade and father time later. Well all the injuries in his bones and ice in the Pacific couldn’t freeze out this icon in his last game in the Jerry West silhouette. Thank the Basketball God’s for trainer Gary Vitti. Another Laker legend saying goodbye for the last time.

Everyone was there in attendance for Hollywoods biggest show like Nicholson. From rap equivalent Jay-Z, a hardcore hoop, court-side fan, to Shaq witnessing his challenge accepted and and then rejected with an even bigger night.

Everyone had been pouring platitudes of tribute to Kobe from interviews to the internet over this last day and season. From a hilarious Michael B. Jordan commercial to a poem by legendary basketball writer Scoop Jackson, narrated perfectly by L.A. rap king Kendrick Lamar. It was enough inspiration to make Kobe leave more than his DNA in these Los Angeles concrete streets last night.

Beautiful tributes from former teammates and forever brothers Pau Gasol and the miracle of Lamar Odom flooded the eyes and gates. As did ‘Dear Kobe’ open letters from fellow class of ’96, Laker alumnus Derek Fisher and Earvin Johnson who introduced the Black Mamba and the sold out STAPLES to his final career curtain.

Now it’s all said and done the only question remains is whether Kobe Bryant is the greatest Los Angeles Laker of all-time? From Wilt to West and Kareem to Shaq the man himself thinks not however…he still believes in Magic.

But as his numbers 8 and 24 graced the hardwood last night alongside his vintage 60 in classic fadeaways, as his career faded to black like his legacy and legend never will you knew who really owned the floor last night. Now put both of those jerseys up there next to all those banners he lifted.

Oh…and the Golden State Warriors beat the Chicago Bulls regular season record with 73 wins last night too as Steph Curry went for a record 400 threes in one season. Just to mention!