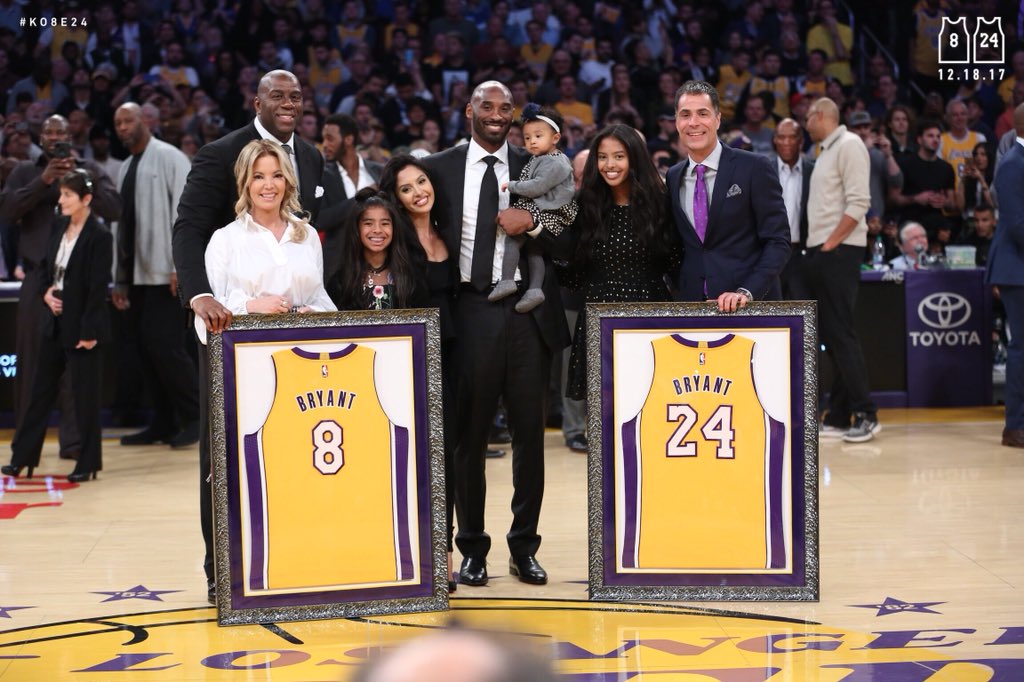 Welcome To 'Kobeland' Where Both Numbers 8 & 24 Have A Home

Excitement was beyond palpable in the STAPLES Center last night. Even more than this weekends behind jersey, lip service between rookie Lonzo Ball and free agent to be with a home in L.A., LeBron James, doing their best Joe Pesci and Frank Vincent in ‘Casino’ impression (“whose this guy?”). As last night in Los Angeles Lakerland became ‘Kobeland’.

Forget Hollywood down the downtown road even if Jack Nicholson’s bald dome is clear to see in the above shot courtside, because last night off Chick Hearn Drive, La La Lakerland was the real city of stars as all the living legends that the storied Lakers hold in their history books came out to pay tribute to another and possibly the greatest who was about to join them in the rafters either side of Chick’s microphone.

The fire and ice of Elgin Baylor and the logo Jerry West. Big Game James Worthy. President Magic introducing his last Laker wish with Jeanie. Cap Kareem and of course the big fella and dynamic duo partner in crime Shaq amongst other teammates like Lamar Odom and Derek Fisher where in attendance like the Kevin Hart and Kendrick Lamar celebrity elite for the biggest ticket at STAPLES since Bean Bryant said goodbye to basketball with 60 points.

See Kobe Bryant was so good the Lakers had to retire him twice like the achillies and shoulder injuries that crippled his career but didn’t close it until he called it. After years of debate between eight and the one better than Jordan 24, the Lakers in the end decided to immortalize both numbers of the five time champ in the retirement rafters.

And in an evening of celebration that even featured a Santa Monica pier like ferris wheel in the ‘Kobeland’ amusement arcade outside the arena, number 8 and 24 had a hard time putting it all in words with his wife and three daughters right beside him. But after a stirring speech that passed respect to everyone from fan to teammate, when asked who would have the upper hand in a young, dunking number 8 and the court scientist of 24, all the retired Bryant could think of was at least ‘Fro8e’ could grow hair.

That was halftime. As for the actual game itself against the champion Golden State Warriors that these young Dubs to be bogey team beat last year that was a different Los Angeles Times story. The young Lake Show came close to honouring their tributed legend, but in the end faced disappointment like the eventuality that they didn’t rock those rumoured Black Mamba snakeskin jerseys that looked to Nike make-up for the lack of Hollywood Nights in all black this season. Rookie steal Kyle Kumza followed his dinner date with Kobe with 25 off the bench. Whilst number 2 Lonzo Ball pointed to 16 points and 6 rebounds and assists for a devilish line. Even returned from injury Larry Nance Jr. caught a slam as good as his dunk of the year against Brooklyn last season. But in the end after taking the champs to overtime like New York last week, the Young Golden State of California took the Showtime swag out of Hollywood, as after K.C.P. failed to drain a game winning three at regulation, Kevin Durant’s 36 points had its own muse cage, Mamba moment with a 116-114 game winner.

But despite this heartbreaking loss for team purple, this night was all about the soul of Lakers gold.

Time to start carving that statue…