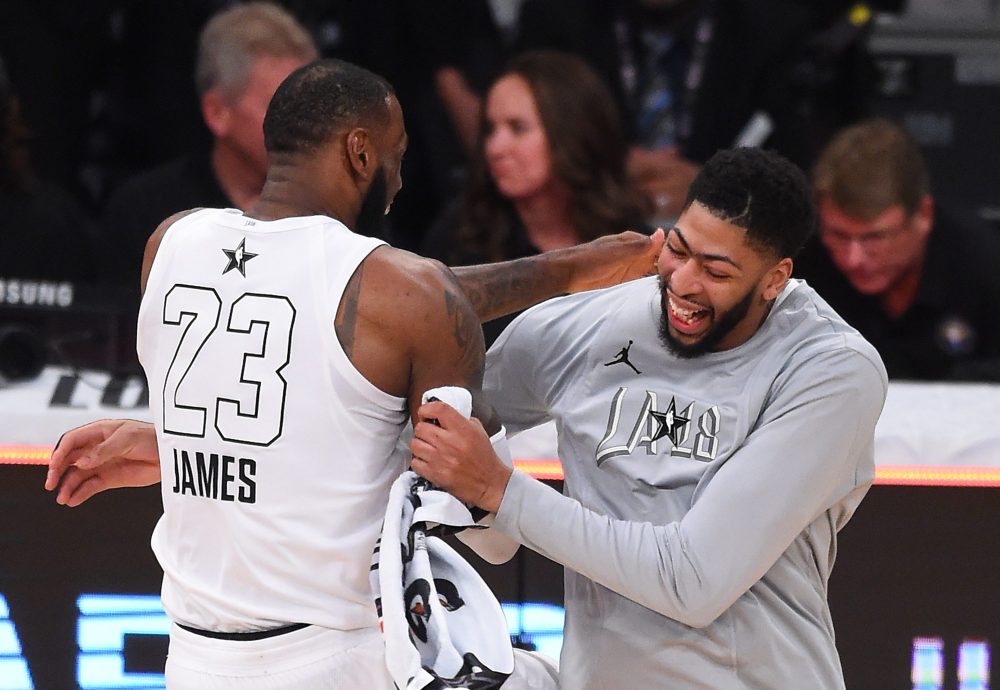 Will The Lakers Ever Get Anthony?

How much of this better drafts than car windows not rolled all the way up this time of year of the young core Lakers have to end up rebuilding other teams formidable futures, pip by pip across the league?

Lonzo Ball? Brandon Ingram? Kyle Kuzma? Ivica Zubac (yeah you like him now the rest of the league has finally seen what we always have)? Josh (expletive) Hart? Plus draft picks that they hope yield the same magic beans as this team that have drafted beanstalks?

And all for one of the best, last bigs, albeit one that could walk next Summer already as a free agent? When they could just wait until he comes around anyway, whilst keeping all of their other assets. That’s the smart business move for a man that owns Starbucks and other American franchises in sports.

Like Viggo Mortensen says in this year’s for sure Tinseltown Oscar winner ‘Green Book’, “take it easy”!

LeBron’s agent Rich Paul better have a better deal on this table that needs a folded up piece of paper under one of its legs if he wants to help form the most dynamic duo in the whole of the NBA since Shaq and Kobe.

Even if Mychael’s son Klay Thompson is reported to follow in his pops Showtime sneaker steps if the Warriors don’t dub him the maximum. Or if our Toronto’s very own Kawhi Leonard has just brought a home in Hollywood like LeBron last year in La La Land.

But we’ve learned from Paul George that you never can predict the future no matter who promises what.

Must Read:
2021 NBA Trade Deadline: Four Canadians on the move

Earvin Johnson and the Pelinka owner we will always call Rob Lowe want Magic in Lakerland right now. It could be a city of stars even when the Academy Awards roll the red carpet back up after the mid-season Oscar break.

But the hilarious ESPN analysis of offering the whole team, Magic’s statue and two letters of the Hollywood sign for the New Orleans Pelicans best player to fly seems like a ‘Semi-Pro’ move. And the kitchen sink too!? At this point I’d rather trade a washing machine to the Kentucky Colonels for Woody Harrelson.

You want us to give up that much? Then we at least get Randle back too!

Yes this writer is a Lakers fan, but I’m a Lakers fan from outside Hollywoodland that knows writing the perfect script takes time.

I mean we love what LeBron is doing here. And we aren’t talking about ‘Space Jam 2’. But if it involves running everyone out of town like capable and not culpable coach Luke Walton then we aint buying…or watching. Sorry Bugs. You know why the perfect superstar spark-plug Isaiah Thomas wasn’t offered a contract to re-sign right? And it had nothing to do with that injury. He’s more than fine.

This young core has the prolific potential already in exciting, epic young gunner effect to be a powerhouse long after the mid-thirties King James has retired to wine country. Haven’t we learned before from the death of the best one, two punch of all-time to not give up a dynasty for a three-peat?

LeBron James joined these Los Angeles Lakers this off-season gone. Not those New Orleans Pelicans. LeBron James came here to attract other free agents…which will soon come. Not to have the future exchanged for a head start on someone who could come for free next Summer without losing a thing. The great interchangeable, veteran playoff big-game experience and young, fresh legs and exuberance line-ups that can run death on anyone will be left dormant if half of it is culled for just one reason.

But still like Brad Pitt in ‘Moneyball’, “ooh I want this one”. Time to work the phones like Will Smith in ‘The Pursuit Of Happyness’.

But will the Lakers in the end ever get Anthony?

And for once this writer is talking about Davis (who at least from the beginning has been upfront and real with everyone that he wants out. Even reportedly adding that L.A. is his preferred destination and anywhere he goes will merely be a rental to there in 2020…but then again, remember PG-13) Not Carmelo. But speaking of which if we are so adamant on dropping a whole young revolution on one man how about cutting a couple of South Bay two-ways for a real star?

Then we can talk about wanting to win now.

And you think I’m just saying all this because I’ve just brought a Lonzo Ball jersey!?

Now whose going to wear number 23?