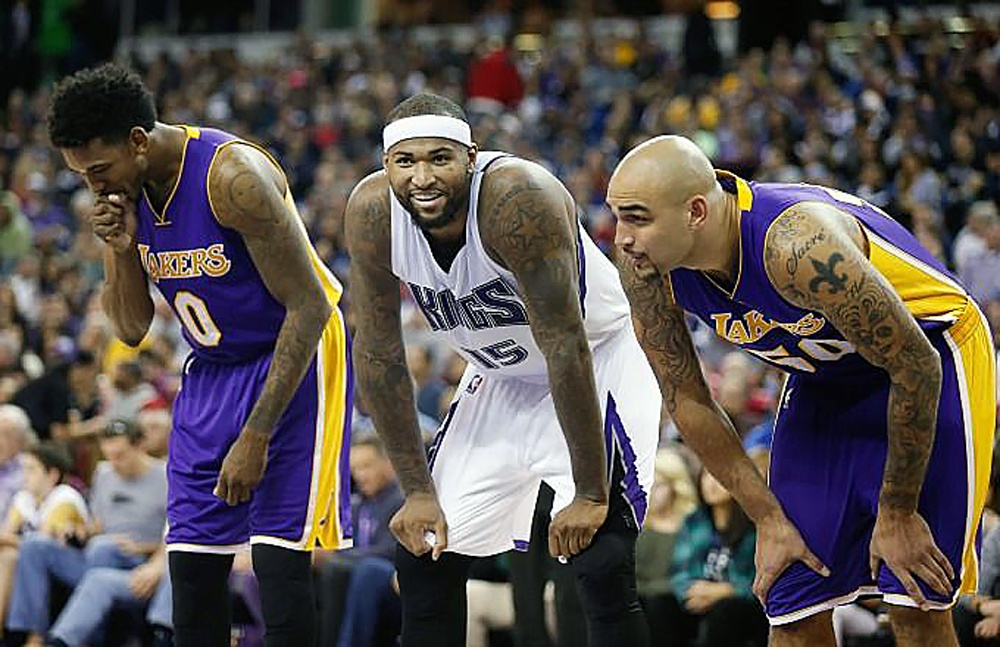 Will The Lakers Relate To Cousins By Trading Their Number 2 Pick And Making Him Number 1?

Cousins may just about to be family with a whole new side of California.

The 411 in Los Angeles is saying the Lakers are looking to trade their number 2 pick in this weeks NBA draft to their former rival the Sacramento Kings for former bad boy DeMarcus Cousins.

But former Lakers centre and then Lakers rival as a pivotal post player for the Kings Vlade Divac, in charge of this hand says the deal is “not happening”.

He might want to check a newspaper or something.

The Lakers could add the Orlando Magic to this deal kicker in a three-way trade if Vlade needs more convincing. If rumour has it it appears that the Minnesota Timberwolves will select Wildcat Karl Anthony-Townes with their first choice in the draft.

That however doesn’t end the Lakers Kentucky connection as they look to swap who we’re sure will be Jahil Okafor for Cousins, who will join the former alumni brotherhood of Lakers sophomore Julius Randle and potentially Rajon Rondo if they still plan to snap him up.

It’s clear the Lakers want to win now with the 24 year old superstar who replaced number 24 Kobe Bryant in last years All-Star game…but will the hot hoop head get on with Bean? This could have shades of Dwight Howard’s end with the Lakers, although this franchise is building for the future, not their retiring superstar.

Seemingly outside of the LaMarcus Aldridge sweepstakes and with nothing concrete on former pick Marc Gasol and interested but restricted Jimmy Butler, the Lakers want to script the new Barkley, Boogie’s down low productions in their Hollywood show.

With his headband on straight he’d be the perfect leader for young studs like Randle and Jordan Clarkson and whoever else is shipped across the Pacific. Although so would a young phenomen in the form of Okafor, fresh off the champagne capping draft and with more years bottled up.

If the Lakers trigger this move they could pull off a draft day steal, or on the other hand be making a Cavalier Kevin Love for Rookie Of The Year, Andrew Wiggins mistake (especially if reports of trading Randle too are true. One top pick is enough, but two? Forget about it). One that Kobe says is the worst move since the Charlotte Hornets gave him up in 1996 for who other but the Lakers Divac.

Is that a lesson to be learned? Who should the Lakers cap? Soon we’ll find out if Cousins is welcomed to the Buss family or kept at a distance. The City of Angels or cowbells? It remains to be seen where DeMarcus will truly become a California king?