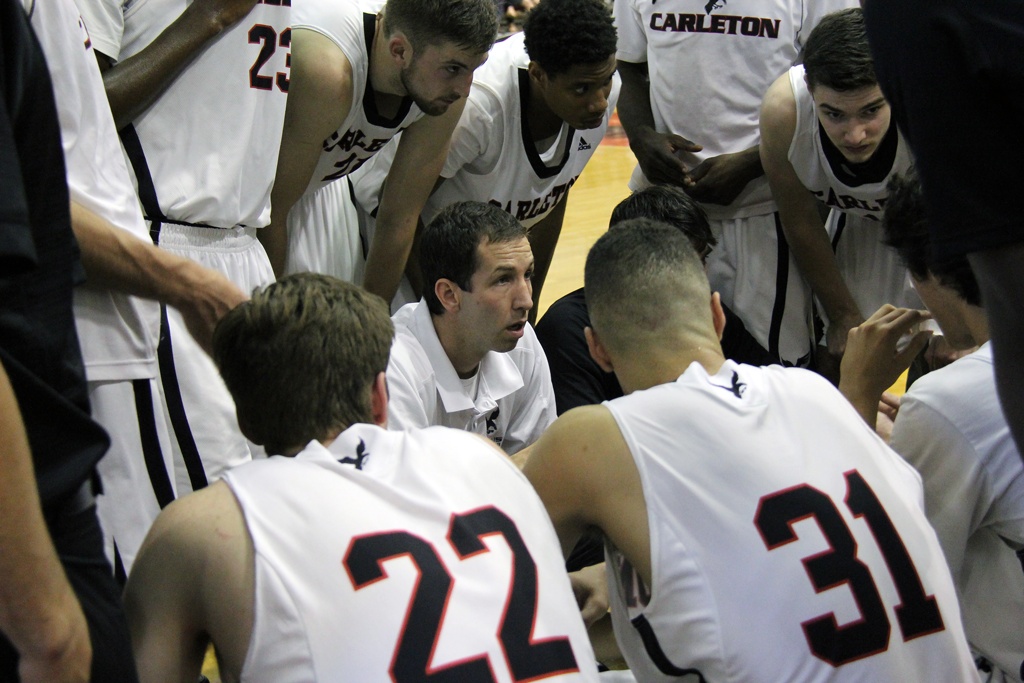 Basketball fans across Canada have been eager to see the “New Look” Carleton Ravens kick off their 2015-2016 CIS season. Winning the CIS Men’s Basketball Championship the last five years led by the dynamic duo of the Scrubb brothers Thomas and Philip, and winning 11 of the last 13 years CIS Men’s Basketball championships behind the great coach Dave Smart.

He helped his two best players (Thomas & Philip Scrubb) finish their senior years as Champions and going on to play in Greece for Philip and Germany for Thomas; Dave Smart will also be leaving the country to focus on the Canadian Senior Men’s National basketball team in Mexico City, his focus this year will be on trying to get the Canadian Men’s National team to earn a spot in the 2016 Olympics games in Brazil therefore he took a leave of absence for the 2015-2016 Carleton Ravens Men’s Basketball season.

Ravens annual exhibition games versus NCAA D1 teams kicked-off against the Murray State Racers. It was strange for the fans watching the Ravens without Dave Smart pacing the sidelines and demanding more out of his troops or the Scrubb brothers giving visiting NCAA coaches nightmares and perhaps even stranger for current and returning players themselves.

The first-quarter started slow as both teams struggled to score the ball ending in a 11-11 tie. Carleton’s defense looked as dominate as usual but the absence of the Scrubb brothers was noticeable as the offense struggled mightily to score by shooting 30% (9-30) from the field and a high turnover rate of 9. Murray State shot slightly better at 37% (10-27) in first-half as Carleton took a 24-23 half-time lead.

Both teams came out the second-half with a lot more intensity. The third-quarter remained close as A.J. Patty of Murray State Racers and Connor Wood from Carleton Ravens exchanged baskets keeping their teams within reach of one another, ending the quarter 43-40 for Murray State.

A monster finish from Kendrick Flomo and a hot Jeffrey Moss who finished with 16 points, most coming in the fourth-quarter, helped visiting Murray State get hot and get an 11-point fourth quarter lead.

The defending champs kept fighting, a run lead by Connor Wood who finished with a game-high 22 points and Guillaume Boucard who was one point shy of a double-double with 11 rebounds and 9 points quickly carved into the Racers lead as Carleton trailed by just two points with a minute to play and in prime-position to add another win over a NCAA team on home-soil.

Murray State knocked down some clutch shots at the end preventing the Ravens from tying the game or getting a lead as the game finished 63-59 for Murray State. Due to this being an exhibition game not many people panicked after the loss as the Ravens interim head coach Rob Smart Jr. quoted “It’s early, it’s a learning experience for everybody and at this point we are just getting familiar with one another, it’s going to take some time to adjust and bring everybody on the same page.”

Filling the departure of Phillip Scrubb is starting point guard Kaza Keane (Ajax, ON) an in-coming NCAA division transfer who played at Cleveland State last-year after spending two years at Illinois State. “It’s like a I’m freshman all-over again, it’s a new system and new culture and so far the coaching staff and my teammates have embraced me and are helping me with the transition from NCAA to CIS. Despite struggling with his shot today (3-11), Keane finished his Ravens debut with 7 points, 5 rebounds and four assists and is focused on the only goal that matters, a CIS national title come March 2016 in Vancouver.

Although the Ravens lost their Head Coach, the Scrubb brothers and their first exhibition game of the 2015-16 season it is not time to panic yet for the new look Ravens who were also with out the services of several key players including starting starting 6’8″ forward Jean-Emmanuel Pierre-Charles and York Lions transfer Ryan Ejim (15.4 PPp/7.6 RPG).

Must Read:
No. 1 Carleton Ravens take down No. 3 Ottawa Gee-Gees to win 2022 Capital Hoops Classic

Pierre-Charles who averaged 7.3 points and 4.7 rebounds a game last season will most likely not suit for the Ravens again as he is on the verge of transfering schools. While Ejim will be eligible come September.