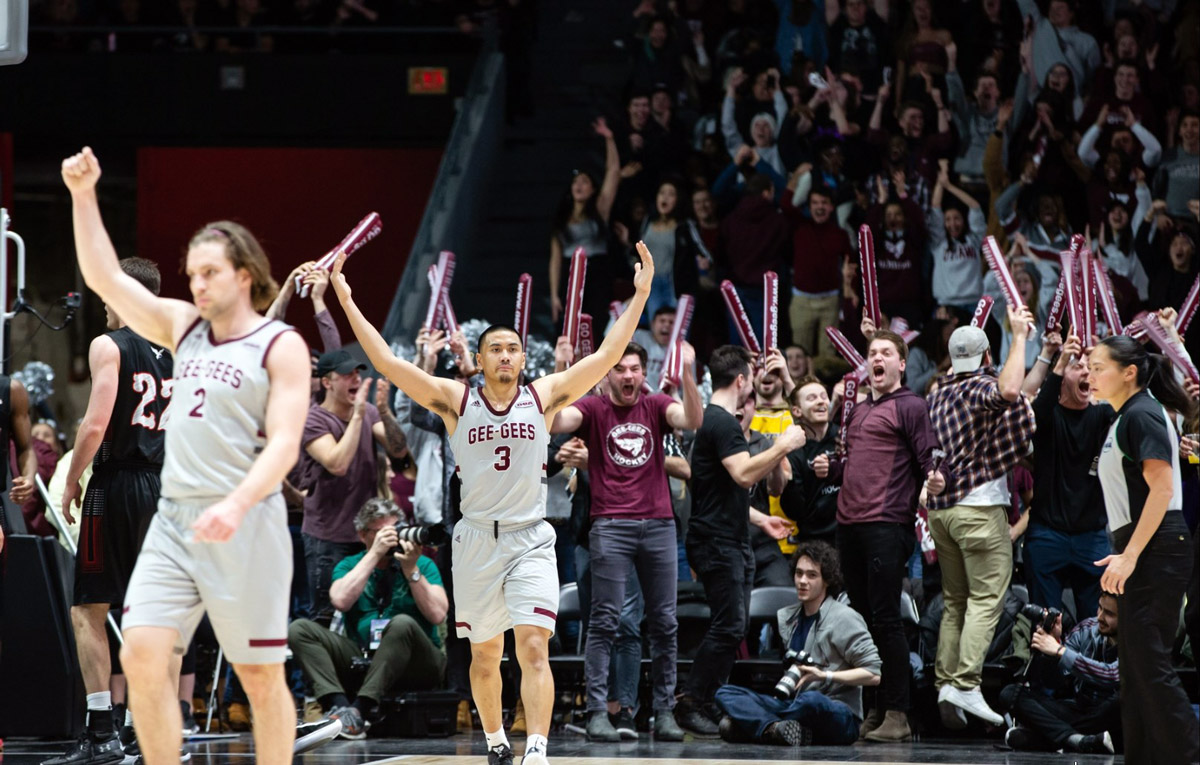 Ottawa, ON — (BasketballBuzz) — When it comes to Canadian university basketball there is simply no better rivalry then Carleton Ravens vs. Ottawa Gee-Gees on the scoreboard.

In yet another memorable chapter in the 56 year history of Canada’s most fierce collegiate basketball rivalry series — the No. 6 Ottawa Gee-Gees put an end to the No. 1 Carleton Ravens’ perfect season with a classical 68-67 win in front of 8,100 passionate fans at TD Place in Centretown Ottawa.

Fifth-year senior point guard Calvin Epistola (Toronto, Ont.) knocked down two crucial free-throws with 4.2 seconds remaining to put Ottawa ahead for good in a thrilling affair that featured multiple lead changes in the final minute. The Gee-Gees defense held firm in the dying seconds despite multiple clean looks by the Ravens within four-feet of the basket to win the 14th edition of the Capital Hoops Classic.

Riding an eight-game losing streak to the Ravens’ and failing to make a dent in the Ravens’ supremacy since eeking out two wins in a indelible three-week stretch in early 2016. The Gee-Gees’ made sure to start the new decade victorious over the U Sports basketball machine that has programmed it’s ways to a record 14 national championships and nearly swept the previous 10 years with eight (8) title banners.

“I just know that all 18 guys and the coaching staff believe in me, and I believe in myself. I know I didn’t play well, I just had to got out there and be a leader. That might be not scoring, that might be playing defense. But the two free-throws, that’s leadership.” commented a confident and poignant Epistola outside the Gee-Gees locker-room during post-game.

Since it’s inception in 2007, the Capital Hoops Classic series has been traditionally played at the home of the NHL’s Ottawa Senators in Kanata, Ontario. The Canadian Tire Centre (CTC), formerly known as the ScotiaBank Centre — it hosted the first 13 games of the Bytown battle and registered the largest attendance record for a Canadian university game with 10, 780 fans flooding the gates in 2015.

Guillaume Pépin (Montreal, Que) led three Gee-Gees players in double-figures with 15 points, 6 rebounds. Epistola scored 6 of his 14 points in the fourth-quarter and was clutch down the stretch adding 6 rebounds, 5 assists, 3 steals. Ottawa’s 6-foot-10 centre Marlon Kordrostami was big with 12 points and a game-high 8 rebounds. The fourth-year finance major came-up with a calculated block on Isiah Osborne and made it difficult for Carleton get anything inside.

“It took a lot of hard work and a really good week of practice.” discussed Pépin amidst the chaos — as the Gee-Gees fans rushed the floor following the win. Our defensive rotations were really good, there was always someone on the kick-outs.

The Ravens rode the hand of Osborne’s game-high 21 points and team-high 5 rebounds. The Windsor native shot 7-of-14 for the game and knocked down 2-of-3 triples — including a perfect 6-of-6 from the free-throw line. Fifth-year senior guard Yasiin Joseph (Ottawa, Ont) scored 12 of his 20 points in the fourth-quarter as the Ravens’ rallied from an 55-46, 11-point hole to take a 65-62 lead with 1:28 remaining.

Coming into the highly anticipated rematch both teams occupied top 10 spots nationally for three-pointers made, but playing in a new atmosphere that featured a freshly laid hardwood and a new set of basketball rims contributed to both teams poor shooting efficiency.

“In an environment like this and with both rims freshly out of the box, you can even brake those things. Getting closer to the basket and easier looks at the rim was an emphasis for both teams,” discussed Gee-Gees head coach James Derouin after the post game mayhem.

Now in his 10th season, Derouin, the second longest tenured Gee-Gees head coach has seen his fair share of big victories and although the win reclaims some bragging rights, he is quick to pinpoint that, “It could’ve gone either way, I mean they missed two, three really good looks within three-feet of our basket.”

In 25 games played since taking over the helm in 2010 from player (2001-2002), turned assistant coach (2002-2008) to now one of brightest head coaching minds in Canada — Derouin’s teams’ hold the top distinction, alongside the Ryerson Rams’ as the school(s) with the most wins over the Carleton Ravens.

A whooping 5-20 win-loss record, and all but one of the five victories by two points or less during that stretch isn’t exactly much to buzz about — but it’s fitting enough to tell the narrative about Derouin’s successful coaching career.

The latest victory over the Ravens’ pushes the Gee-Gees’ winning streak to four with two home games remaining before the OUA conference playoffs begin.

Ottawa will host the 2020 U Sports Final 8 Championships, the Gee-Gees were awarded the hosting rights for the men’s national tournament from which will take place March 7-9 at TD Place.

A guaranteed return to the big stage for the first time since four straight appearances from 2013-2016 will certainly ease the post-season pressure. But lingering memories of two straight championship game appearances only to be denied by Carleton in the Gold medal game — still haunt the Gee-Gees program — losing in Ottawa 79-67 in 2014 and subsequently the following year, 93-46 in Toronto.

History and numbers are great and the Gee-Gees have shown the country that they can beat Carleton during the regular season and in the post-season. As the untold chapters unfold — nothing would be better for Gee-Gees Nation and for Canada’s best collegiate basketball event then the ultimate glory — a victory over their arch rivals in the championship game in three-weeks time.
Lucky for them, and if the stars align they will have a chance to eekout the programs’ first national basketball title.