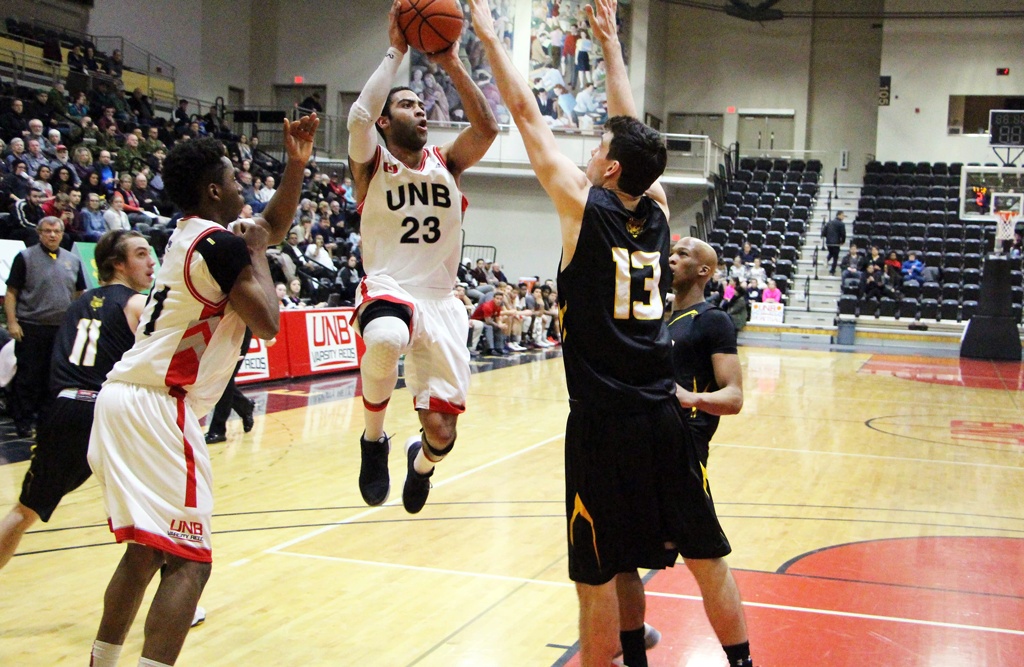 They’re Biggie’s words, edited for accuracy. Not stolen, exactly, but adapted and adopted and filtered through the prism of another man’s experience. They express the truth as Javon Masters sees it, and at the moment they’re part of his message for the world.

“Stay far from timid,” Biggie said. “Only make moves when your heart’s in it.

But Masters, the all-time leading scorer in Canadian university basketball, sees it differently, in light of everything that has happened in his five seasons at the University of New Brunswick.

“The sky ain’t the limit,” Masters tells his Twitter followers. “But remember to make moves only when your heart’s in it.”

Put another way: we’re capable of more than we realize. What seems possible only hints at our potential. And there’s an entire universe beyond the sky.

Masters knows this because he’s lived it. He knows it because he’s gone from small-city kid to one of the best players in the history of the Canadian game.

“As human beings, we’re able to do a lot of stuff that not many people think we are able to do,” he said in the hushed, raspy monotone that marks his interviews.

“But once you put your mind to it, anything’s possible.”

Masters does not remember the basket that started it all, but he’s heard the story so many times he can tell it in vivid detail.

He’s around two years old, living in Kitchener, Ontario, and his father Rooyan, a millwright who grew up playing cricket and soccer, brings home a plastic Fisher Price basketball net.

Masters runs and grabs the ball immediately, takes a shot, and it goes in—his first bucket.

“That’s pretty much how the journey started—me playing basketball here at UNB and just growing up in Kitchener, playing it as well, was that moment.”

Kitchener is a city of 233,000 people about an hour west of Toronto, best known in basketball circles as the hometown of Denver Nuggets guard Jamal Murray.

Masters is three years older than Murray and they rarely played together, but he recognized Murray’s potential at an early age.

“Just coming from Kitchener, it’s really a small city,” said Masters. “So I mean, you’ve got to be able to prove yourself on the big stage, and he was certainly doing that from Grade 9 until he went to university at Kentucky.

“I always knew that he had the potential to do it. He just needed to just keep working and just block out all the noise and whatnot, and just keep focused on what matters.”

Murray played at Grand River Collegiate and Orangeville Prep on his way to a starring role at Kentucky and landing in Denver as the seventh overall pick in the 2016 NBA Draft.

Masters played at Forest Heights Collegiate, winning a city championship in his fourth season and attracting interest from NCAA schools, but no scholarship offers.

He decided to play in Canada rather than burn two years of eligibility at a junior college in the United States, and settled on UNB in part because it wasn’t known as a basketball school.

“I just wanted to go somewhere that I could develop as a basketball player and help build a program from the ground up,” he said. “And that’s what we’ve done here at UNB.”

Masters was an elite high school player, usually scoring around 18 or 19 points a game, he said. But as he transitioned to UNB he made an effort to get bigger, faster and stronger, and to minimize the weaknesses in his game.

“I had that chip on my shoulder to show everyone exactly who I am,” he said, with a hint of swagger.

“And now everyone knows who I am.”

UNB had its eyes on Masters in his senior year of high school, due in part to his remarkable quickness and a highlight tape that showed him diving for loose balls.

But it wasn’t until four games into his freshman season that it was obvious he’d be a star. The turning point was UNB’s home opener against the University of Prince Edward Island, where Masters had 44 points off the bench in a 93-81 win.

“Just being able to play through that … especially putting up that many points in our home opener, really said to me that I could be able to score a lot of baskets,” said Masters.

He became a starter after that, winning the national scoring title with an average of 27.4 points per game, as well as the national rookie of the year award and a second team all-Canadian selection.

Head coach Brent Baker allowed him to be himself on the court, and Masters continued to put up gaudy stats: 25.1 ppg as a sophomore and 28 ppg as a junior, winning the national scoring title both years.

“If you don’t allow your players to have confidence and play with some swagger and play with some toughness, then you’re cutting off your nose to spite your face,” said Baker, who was an Atlantic University Sport (AUS) all-star at St. Francis Xavier in the 1980s.

“As far as me letting him loose and doing what he does, Javon’s a pretty intelligent basketball player. As much as he scores, he doesn’t dominate the ball like you would think.

“He doesn’t have to pound the you-know-what out of the ball to be a good player. He spaces well without the ball, he gets his teammates involved. He’s not a ball-dominant scorer, and he’s not a volume shooter.

“I mean, he shoots 50 percent [from the field] and he shoots 90 percent from the free throw line. So he’s very, very economical in what he does.”

“We talk about everything, just basketball-wise and life and stuff like that,” said Masters. “It’s really good to have a coach who’s like, super-chill off the floor.

“But when he’s on the floor he’s totally business, because he wants to win.”

More than any other lesson Baker has imparted, this one sticks: “Just be determined. Nothing will ever stop you, really, if you put your mind to it.

“He just has that type of attitude,” said Masters. “He always wants to win.”

Along with the gaudy stats came the knowledge Masters could eventually make history.

After his second season, it was obvious an all-time AUS scoring record was within reach. The national record was possible too, but nothing was certain.

Masters moved from shooting guard to point guard in his fourth season, filling a role Matt Daley vacated when he graduated in 2016.

His scoring average dipped to 19.6 ppg for the season, but his assist numbers jumped.

The National Basketball League (NBL) of Canada’s Cape Breton Highlanders also drafted Masters with the eighth pick of its All-Canadian Draft in 2016, giving him the opportunity to go pro.

“You can go play in the NBL,” Baker remembers telling his star player. “If that’s your goal, fine.

“But I think if you come back and you come back for your fifth year, your goal should be: ‘Hey, let’s get the scoring record. Let’s get an AUS championship. And all that’s going to do is further enhance your resume and make it better for you when you do get an agent and do get a contract, that you’ll be better off.’ ”

Masters agreed to come back and immediately started getting buckets.

He grabbed the AUS career scoring record on Nov. 17, 2017, breaking the existing record of 2,069 points set by UPEI Panthers standout Curtis Robinson in 1996.

In the months that followed, it became clear Masters would break the national scoring record, too. It was only a matter of time.

Boris Bakovic, who set the record with 2,282 points over five seasons at Ryerson and the University of Calgary, would be edged out.

“[Masters’] ability to be that consistent over that range of time is—for me, it’s the most astounding thing of the whole shooting match,” said Baker.

“And every night, he finds a way.

“Maybe it’s all about ignorance is bliss, and he just blocks it all out and just goes forward and has that drive about him and he goes and does it.

“But for whatever reason, he gets it done, and it’s all due to his drive.”

The national record fell with a free throw on Jan. 26, 2018, with 46 seconds left in the third quarter of a high-scoring home game against St. Mary’s University.

Masters remembers working through his usual routine: spin the ball, dribble it twice, spin it back, shoot.

“The game didn’t really stop,” he said. “We still had some possession to go, so I didn’t know I’d broken the record until the PA announcer said I did.
“It was pretty chill. I got a standing ovation, but I was still in game mode.”

“I’m not really thinking about it,” he said, referring to the record a few days later.

“All the hard work is really paying off for everything I’ve worked on—when I’m in the gym and whatnot, on the pavement back home.

“It means a lot of hard work and stuff like that that’s really helping me get to where I want to be.”

The season is winding down, and Masters is focused on winning that AUS championship.

UNB finished second in the conference during the regular season, eight points behind Dalhousie, the three-time defending champions.

Anything is possible, but UNB enters the playoffs as an underdog. If they win it all, the legend of Javon Masters will grow beyond anything he could have predicted five seasons ago.

“Just being able to be on top in my final year would be something,” he said. Anything is possible, but no one is holding their breath.

After the season is over, Masters hopes to go pro, either in Europe or in a North American league like the NBL.

“I’ll sit down after [the] season with my parents and discuss that,” he said.

But his love for the game is still here. He wants to keep doing this as long as he can.

“I mean, why would I stop now, after I’ve put so much hard work and effort in,” he said. “I’ll only stop when my body tells me to stop.”