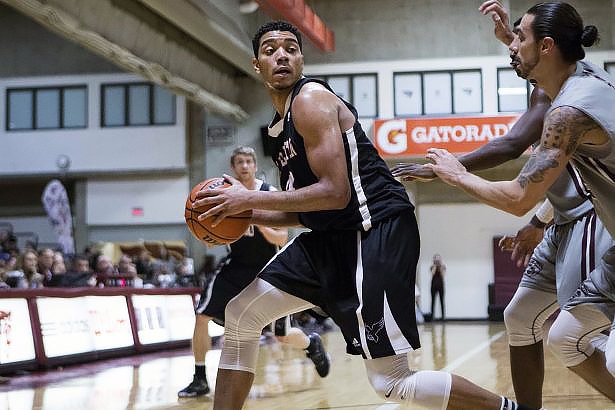 Ottawa, ON – The twelve-time defending CIS/USports National Basketball Champions and No.1 Carleton Ravens went into Monpetit Hall and completely dominated the No. 2 ranked Ottawa Gee-Gees, locking up their Bytown rivals with a blistering 81-40 win.

The Ravens, the top defensive unit in the country, allowing an incredible low of only 60 points to opponents, dominated every aspect of the much anticipated game holding Ottawa to four points in the first-quarter and thirteen in the second for a grand total of seventeen first-half points and 35-17 half-time lead.

The first-quarter ended with Ravens leading 11-4 as both teams slugged it out in front of a jam packed standing room only Monpetit Hall which hasn’t seen the Gee-Gees get dismantled like this on their home floor in 32-game OUA conference games – snapping home winning streak which dated back to 2012.

Fifth-year senior Guard Connor Wood caught fire in the second-quarter after a cold start scoring all but 14 of the teams 24 points in the quarter and finished with 16 in the half and game-high 19 points. Starting point guard Kaza Kajami-Keane added 10 points, six rebounds in just 19 minutes.

Carleton shot 50% in the second-half and finished 31-68 from the floor and 13-of-28 from downtown while turning the ball over 9 times compared to the Gee-Gees 18.

The 40 points allowed by the Ravens is their lowest against the Gee-Gees since a 74-34 smack-down in January 18th, 2012 at the Sixth Annual Capital Hoops Classic.

Carleton’s record  stays unblemished at a perfect 10-0, 16-0 against Canadian competition and 22-2 overall with the only losses coming from two NCAA opponents on the road in Rhode Island – Providence Friars 87-69 and in Philadelphia against LaSalle Explorers 79-73.

Both teams will meet again in just over two weeks (Feb 3rd) at the 2017 Capital Hoops Classic at the ScotiaBank Centre.