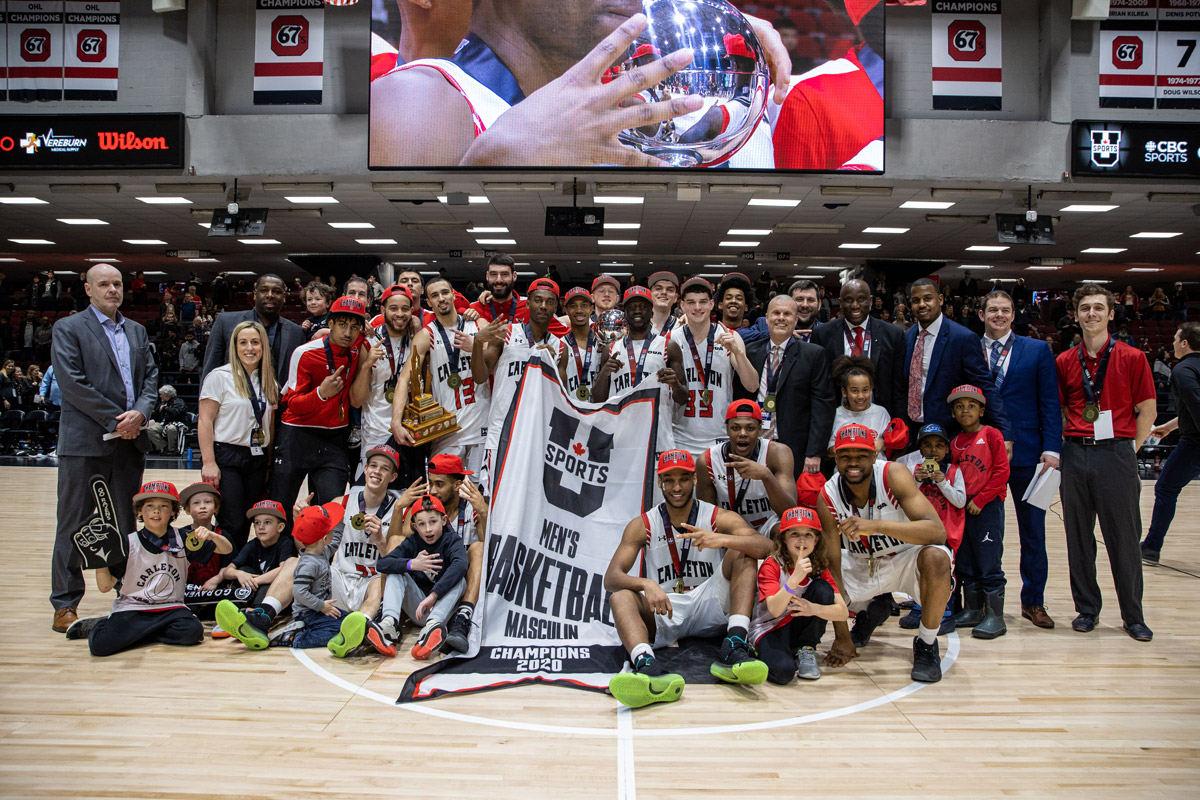 “These are the types of championships we talk about to future generations. What, how it means, when you’re down — how you respond is what matters.” described former four-year player and fifteen year veteran Ravens’ assistant coach Rob Smart Jr. — following the No. 1 Carleton Ravens’ improbable 74-65 comeback win over the No. 2 Dalhousie Tigers at the 2020 U Sports Final 8 men’s basketball championships in Ottawa.

The Tigers patiently waited over 365 days, calmly and meticulously orchestrated their way to a well deserved, heavyweight Sunday night, primetime championship bout with the defending champions Carleton Ravens in their own city.

“That’s an amazing, that’s really, a good team, that’s a really good U Sports team – they’ve got everything you want and they’re really good, so to come away with the win I’m really proud of them.” a relieved Smart Jr. continued.

Part of Carleton’s first championship team in 2003, Smart Jr. knows a thing or two about winning and what it takes to overcome adversity in order to reach your goals.

“It feels like the first one, where we couldn’t score, it seemed like there was no way we were going to win, it was ugly, we couldn’t shoot.”

Playing in their first U Sports Final 8 men’s basketball championship game, the Dalhousie Tigers didn’t show any fear — taking the game to the Ravens’ the in opening minutes with relentless offensive rebounding and precision execution of head coach Rick Plato’s mastermind game-plan.

“I’m not going to tell you everything, but I’m going to tell you right now we’ve watched enough, we know their personnel. Let’s just say we know them pretty well, we know what they like to do and we’re just glad Eddie Ekiyor is not back.” discussed the 2020 U Sports coach of the year, about his teams’ preparation and mindset following their national semi-final victory over the UBC Thunderbirds.

Behind Plato’s strategy, Dalhousie controlled the tempo, pounded the glass with seven offensive boards in the first 10 minutes and quickly subdued the mostly pro 4100 Ravens crowd by taking a 15-13 first-quarter lead. Tigers senior forward Sascha Kappos further silenced the arena when he drilled a buzzer beating half-court three-pointer to give Dalhousie a 36-24, 12 point half-time lead — putting Carleton in the biggest margin of deficit during their historic, unprecedented and unblemished 15-0 championship game record.

“I’m still speechless, didn’t look good at half-time, I thought we didn’t play well, they seemed to get every bounce, seemed like everything was going in for them. You know, and Carson was going nuts, and it was like wow, it was unbelievable. I didn’t think we would get there, I mean, I just thought the guys had the will to win.” discussed Carleton head coach Taffe Charles amidst the championship chaos and celebration.

Down double-digits at half-time the Ravens’ turned to their experienced coaching staff and former head coach and future Canadian basketball hall-of-fame Dave Smart for words of wisdom and inspiration.

“For me, it was more about the fact that other than the last three-minutes of the half we did what we wanted to defensively. As I said to all of them, we’re gonna go on a run, we’re gonna score 45, at least 45 in the second-half they just can keep defending ’cause they’re going to get worn out, so we’re gonna get ours, it was just, we can’t have that last three minutes, if we play like we did for the first 17 we’ll be fine.”

A tense and anxious crowd welcomed both teams to the court following the fifteen minute break. Looking to put the game out of reach, the Tigers’ came out confident and continued to be the aggressors, extending the lead to a game-high 14 points on the opening possession. Withstanding everything the defending champs threw at them, Dalhousie continued to knock down timely shots and enjoyed several double-digit leads during a suspenseful third-quarter.

Must Read:
NBL Canada remains on pause during pandemic but Aims to return stronger

Trailing 49-39 with 4:09 remaining on a made three-pointer by Tigers’ fourth year guard Alex Carson the Ravens’ and their supporters chants for defense grew louder — sounding more and more desperate as each precious second ticked off the clock.

Needing a spark, the Ravens’ finally found one in 6-foot-9 sophomore forward Biniam Ghebrekidan. Forced out of the game for a quick patch-up due to blood on his right cheek — Carleton’s only true big man entered the game, grabbed two offensive rebounds and knocked down two crucial jump-shots as the Ravens’ held Dalhousie to just five points the rest of the way and cut the deficit to four at 54-50 at end of the third-quarter.

“Biniam did an awesome job he really chased the 6-foot-10 guy out of the game and it was awesome. He provided the scoring and the toughness that we needed all-year around so I’m more proud of him than anybody.” mentioned Taffe Charles after being profoundly thanked by Ghrebekidan’s parents.

With momentum on their side and a 15th national title in sight, Carleton continued to attack the basket and quickly tied the game at 54-54 in the first minute of the fourth-quarter — putting all the pressure on the Atlantic University Sport (AUS) champions.

Two back-to-back triples by Dalhousie sharpshooter Alex Carson reignited the offense, and a tough Shamar Burrows lay-up capped off an 8-2 run to put the Dal Tigers ahead 62-58 with 4:02 remaining in the game.

Warnholtz (Ottawa, Ont.) rewarded his coach by scoring the Ravens’ next five points — a corner pocket baseline triple right in front of the Carleton bench, followed by another jump-shot — intensifying the action at 64-61 with 3:46 left.

“I can’t lie I wasn’t super expecting my name to get called at the end of the game, but you know we got a whole team of guys that can play so anybody can be thrown on the court at anytime. Everybody was staying locked in on the bench talking to the guys. When I heard my name I went out there, I was just thinking play good defense and help the team out however I can, the ball came to me and I was glad I could hit some shots to help the team.”

“That was his sub, that was unbelievable, we were both kind looking like oh. We knew he was right, we needed some offense, we were frozen, we weren’t scoring.” further alluded Rob Smart Jr. about Charles’ gutsy call to replace senior guard Yasiin Joseph with Warnholtz during a crucial time in the game.

Tournament Most Valuable Player (MVP) Isiah Osborne (Windsor, Ont.) tied the game at 65-65 with an aggressive take to the basket and a dagger three-pointer by fifth year senior point guard Munis Tutu (Windsor, Ont.) off of an offensive rebound put the Ravens’ ahead 68-65 with 1:37 to play. Ghebrekidan all-but assured the championship with his sixth offensive rebound, followed by a three-point play that sent the entire TD Place arena into jubilation as Carleton finished the game on a 16-3 run to claim their 15th U Sports men’s basketball championship in 19 years.

“Just like the first, it’s always amazing. Honestly, it was a tough game. Came out in the first-half a little stagnant, had some things to correct at halftime. Great comeback. I love my team, we work hard with each other everyday and I think this is what we deserve, that’s what we work all-year for.” a calm and relaxed Osborne described his feelings after securing his second championship in three-years with the Ravens.

Ghebrekidan led the Ravens’ charge with a 19 point, 11 rebound double-double.The big man also showed the shooting touch from mid-range, knocking down 9-of-12 shots on his way to player of the game honours. Tutu, held scoreless in the first-half, scored all of his 14 points in the second-frame including 7-of-8 from the foul-line when it matter the most.

Munis Tutu – “the best decision I’ve made in my life”

“Honestly, I just felt like I was going and we had the momentum at that time and I felt confident taking that shot and it was what we needed at the time and I’m glad it went in.” recounted Tutu about his clutch three-pointer that gave Carleton their first lead since 18-15 with 7:57 in the second-quarter.

“Coming to Carleton was the best decision I’ve made in my life. At the time when I made the decision I didn’t know about it, but just coming here, learning what the Carleton way was and going through everything that we do everyday at Carleton made me the man I am. I want to thank my coaching staff for pushing me everyday, getting on me everyday, my teammates for keeping me accountable for the three-years and I’m glad we got to end it this way.” opened-up Tutu about his journey and his time with the Ravens’ program.

Alex Carson led Dalhousie with a game-high 20 points, 2 rebounds, 7-of-14 field goals and 4-of-11 smooth looking triples. 2020 AUS player of the year Keevan Veinot did whatever he desired in the first-half, but was held scoreless in the second-half as two-time national defensive player of year Marcus Anderson put the clamps on the All-Canadian guard. Veinot picked-up a high ankle sprain with about 5:22 to play with Dalhousie leading 62-58. The the 6-foot-4 guard from Port Williams, Nova Scotia returned to game with 3:27 to remaining and finished with 11 points, 9 rebounds and 6 assists on 4-of-17 shooting.

“It was great. I mean Taffe and I are pretty close so I was hoping that it finished well for him his first-year, but also for our fifth year guys, mean we’ve been through a lot together, and this year Taffe has been great, he’s let me be involved in a pretty solid way, I mean, I oversee it, but I also can be a little annoying, he tolerates me.” concluded Dave Smart.

“The friendship means a lot to me, we joke about it, but when things are going bad you kinda wanna fight for the people you’re close too, so this one was more emotional in the second-half, I’m proud of the guys, I’m proud of how hard they played.”

Charles’ becomes the first head coach in U Sports history to win both the men’s and women’s national basketball championships. The former Raven’s player guided the women’s team to national glory in 2018. Additionally, Charles is also the first African-Canadian to coach his team to a U Sports national title.

Carleton has now won back-to-back titles, 9 out of the last 10 national championships and finishes the season with a stellar 35-3 overall record — with last second losses to Valparaiso and rivals Ottawa Gee-Gees — including a road loss to the Syracuse Orange at the Carrier Dome.

The 2021 U Sports men’s final 8 national championships will be back in Halifax, Nova Scotia – hosted by the St. Francis Xavier University, the tournament will act as a celebratory, commemorative outro for one of the greatest coaching legends the game has ever seen, as Steve Konchalski finally calls it a career after 45 years