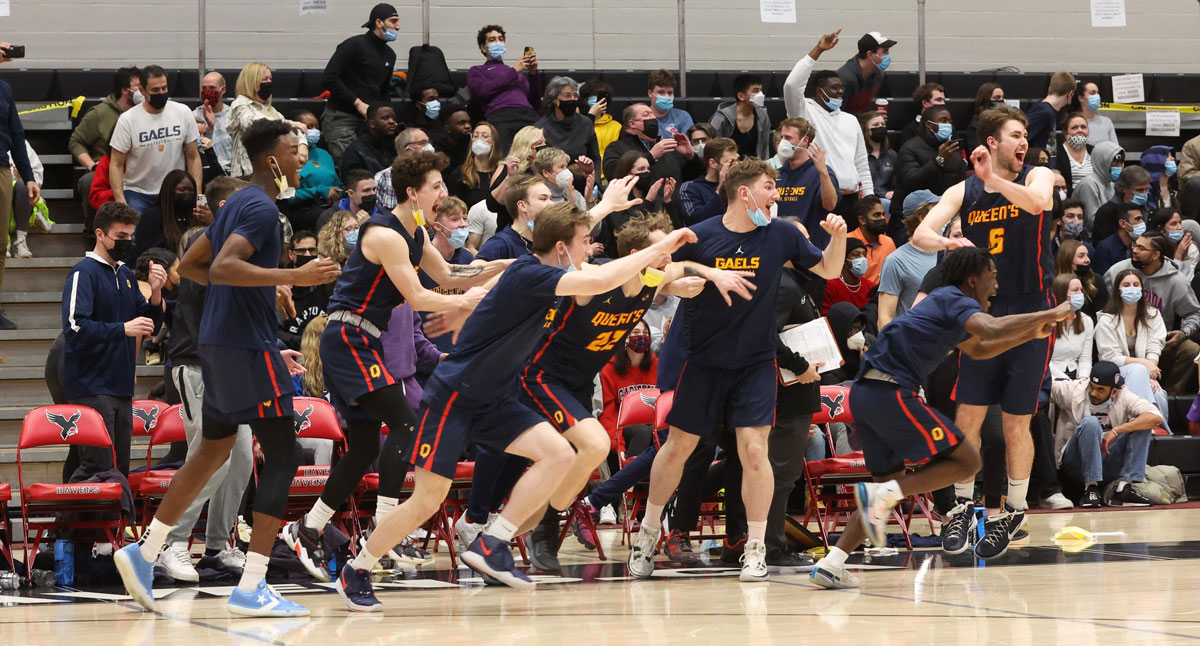 Syllas dropped one of the greatest all-time single game scoring efforts against Carleton, finishing with a game-high double-double, including a career-high 39 points and 10 rebounds. The highly recruited local Kingston product knocked down 15-of-28 (54%) shots, 6-of-13 (46%) three-pointers and 3-of-5 from the foul-line.

Trailing for the majority of the game and down 62-60, the Ravens opened the fourth quarter on a 10-0 run, keyed by back-to-back corner pocket triples by Cordell Veira (Etobicoke, Ont.) to grab their biggest lead of the contest at 70-62 with 8 minutes remaining.

The Gaels responded by outscoring Carleton 24-10 the rest of the way to eek out their first victory over the Ravens since a 65-64 one-point win on Friday, January 30th, 1998 in Kingston, Ontario.

Coming off of a clutch quarter-finals performance in the upset road win over the Ottawa Gee-Gees less than five days ago, fifth-year senior guard Quinton Gray (Richmond Hill, Ont.) scored nine of his 16 points in the last five minutes of the game.

The six-foot-three, economics major, calculated and converted an old-fashion hoop plus the harm lay-up to give Queens the lead for good at 80-76. Gray then buried a key fourth-quarter triple to provide a five point cushion with two minutes to play.

Separated by one year, the talented Syllas brothers decided to commit to veteran head coach Stephan Barrie in April 2019. The Gaels immediately benefited from the LaSalle Secondary School standouts winning pedigree and their presence in the lineup. Queens posted a 14-8 conference record during their freshman season, the most wins during Barrie’s eleven-year tenure with the Gaels.

Lloyd Pandi (Ottawa, Ont.) kept the Ravens in the game with 19 first-half points and finished tied with a team-high 25 points on an efficient 10-15 (67%) shooting effort. In his last game at the Ravens Nest, senior guard Alain Louis (Montreal, Que.) scored 17 of his 25 points in the second-half. Cordell Veira added a third scoring punch from the perimeter to finish with 14 points on 4-of-7 made triples.

The Ravens closed out the regular season by hammering Queens on back-to-back nights, 86-46 in Kingston on March 12th and 94-75 in Ottawa the following night, as Carleton honored their four departing graduating players.

Now in his eleventh season as a head coach, Stephan Barrie and the Gaels will travel to St. Catharines, Ontario to take on the Brock Badgers in the 2022 Wilson Cup for the OUA title game.

The field is nearly set for the upcoming 2022 Final 8 national championship. Hosted by the University of Alberta Golden Bears for the first-time in school history, the tournament is scheduled for April 1-3, 2022.

Despite just their first conference and only their second-loss of the season, the three-time defending champions Carleton Ravens (21-2, 14-0 OUA) are widely expected to earn the lone Final 8 wild card spot.

Must Read:
How's This For An All-Star People? Common Takes Home Celebrity Game MVP In Chicago

The Victoria Vikes claimed supremacy on the west coast by winning the Canada West title over the Saskatchewan Huskies for the first time since 2015. Out east, the Dalhousie Tigers booked their third straight trip to nationals by winning the Atlantic University Sport (AUS) conference.

The Golden Bears get the automatic bid as host. The Huskies also earn a spot as runner-ups of Canada West.

All that is left to be determined, is who will represent the Quebec conference. The Concordia Stingers and the McGill Redbirds will battle it out for the Réseau du Sport Etudiant du Québec (RSEQ) conference championship.

The tournament seeding is scheduled to be released following the two remaining conference championships.