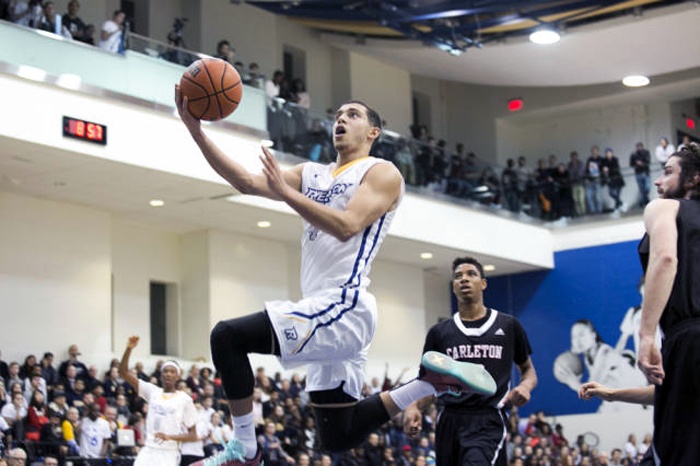 Seven years in the making since taking over head coaching duties, and ironically exactly 16 years to the date, Patrick Tatham, Roy Rana and the entire Ryerson University made a very, very loud national statement, earning historic wins against two of  the countries traditional powerhouses for the first-ever number one ranking in school history, in any sport.

The win over Carleton ended a 16-year, 33-game losing streak and handed the Ravens their first back-to-back Ontario Univerisity Conference (OUA) losses (Guelph Gryphons, Toronto Varsity Blues) since the 2001-2002 season. To put it in perspective, Dave Smart was just in his third-year and current interim coach Rob Smart was running the back-court show as the lead point guard.

The Rams followed up their dominate showing the previous night by taking full advantage of a short-handed Gee-Gees squad who was without the services of Caleb Agada (ankle injury) by snapping an a eight-game losing skid to the Gee-Gees – a team who has also historically dominated the Rams with a combined record of 26-8 that goes as far back as November 2003.

Toronto Junior Guard Ammanuel Diressa (Tennessee Tech/Eastern Commerce) put on a show in what has surely become one of the more hostile environments in the country. The former Eastern Commerce standout and NCAA DI to CIS transfer was unconscious putting up game-highs off the bench, 21 points in 22 minutes against Carleton and 29 points versus the Gee-Gees.

Both victories are early signs that CIS basketball supremacy is slowly re-structuring itself and shifting west, down highway 401 from Ottawa to Toronto.

A traditionally bottom of the standings OUA team during the late 90’s and early 2000’s Ryerson’s athletic department decided it was time to change the overall image of it’s sport programs embarking on an ambitious plan which included the hiring Roy Rana on August 14, 2009. Rana led arguably the most successful Toronto high school basketball program, the Eastern Commerce Saints to four straight provincial titles.

Beyond the scoreboard, it’s impossible not to recognize Ryerson’s overall commitment to becoming a national powerhouse in the mecca of Canadian basketball. The re-opening and re-transformation of the old Maple Leafs Garden to the Mattamy Athletic Centre into a state-of-the-art, 21st century sports and entertainment facility not only gave current and prospective student athletes home court advantage, it gave Rana & Co. a recruiting surplus around the country.

With Toronto producing and sending the most NCAA basketball talent in the country including a key decision by the CIS / U Sports board to allow Canadian NCAA basketball transfers to return back home without being forced to sit-out a year and it’s easy to start seeing how Rana’s plan to bring a CIS parade down Carlton and Yonge street is not as far fetched as we may believe.

Fittingly it took a veteran roster with a mixture of players like Diressa and Aaron Best, two former Eastern Commerce Saints, the first a NCAA transfer and the latter, part of the first recruiting class opting to play for Rana, rather than go down south. Both players as well as key additions like 6-9 forward Kadeem Green (Missouri Tigers/Ohio University) and Adika Peter-McNeilly have helped Ryerson finished what guys like Jahmal Jones, Jordon Gauthier and others started, finally ending Ottawa’s dominance atop of the CIS national rankings.

With the first-ever number one national ranking now firmly in place the Rams are in prime position return to the CIS Final 8 where once again, they will look capture their first-ever National Championship after earning a bronze medal and a third-place finish just a year-ago as successfully hosts.