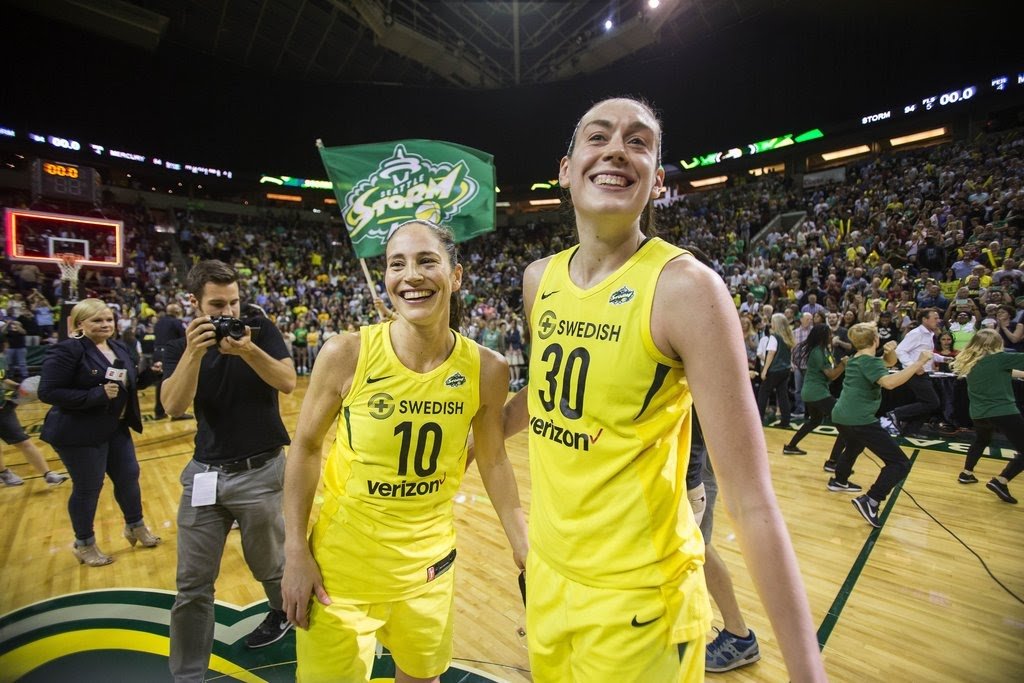 Hotter Than Mercury, Seattle Storm To The WNBA Finals

Originally I was going to write a post entitled, ‘I Never Want To Write An Article Like This Again…But I Will’ (and I will). About how this blatantly sexist disrespect for the WNBA needs to stop in a world that still thinks it is finally waking up to a time of equal rights for all…now! When we still have that “grabber” eating breakfast in the most important house in the world and everyone failing to see how that is beyond wrong is too busy burning Nikes they could give to homeless vets to see what is right when it takes a knee for you and me.

This came after at the start of season I saw a post for the then upcoming WNBA season on their Facebook feed be desecrated by derogatory comments from men and women alike about how this league wasn’t worth watching because it was run by women, not men and the disrespectful like by the thousands that we shouldn’t even give creedance too. But screenshotting for a post…I did. So much hate and one or two word put downs, unoriginally recycled like the nature of ignorance to unjustified reinforced likes and laughable emoticons in todays trite social media world. So much so that the WNBA had to take down their original photo and repost again, all whilst keeping tab track of their timelines.

Now how pathetic is that? No, not that the WNBA did that. But that they HAD to do that because of all the trolls bullying their way through a comments section those too busy with a life wouldn’t have the time to scroll through (*hands up*, guilty as self charged). But hate should be taken away wherever it is present. Publicly or privately. Those so called “keyboard warriors” who should ‘Expect Great’ when they see the soul of this sport in the NBA’s sister league and not accept hate in their hearts when they see these women leave it all on the floor. To quote Jeremy Renner in Elizabeth Olsen’s standout starring role in, ‘Wind River’ (a movie based on true events) in reference to a girl who ran 6 miles in the snow, barefoot to her death to escape her rapists, “that’s a warrior…that’s a warrior”.

Or even the other night in a vain attempt to escape all the Twitter tirades from those who think tennis warrior Serena Williams shouldn’t wear an all black catsuit whilst she serves up iconic play after iconic play, game set and try to just match this legend. One that actually helped saved her life that right now people are reducing to again blatant sexism and in addition still alive today veiled racism. You respond to all those “tut, tuts” by grand slamming them in a tutu queen. Trying to ignore all the cancel culture vulturing world of trolling and scrolling social media, I ironically fell down a youtube rabbit hole that lead me to the wonderland of the Slam Dunk contest and the 1996 one won by Los Angeles Lakers rookie Kobe Bryant in his warm ups.

Must Read:
The Chilling Adventures Of Sabrina Ionescu

The panel of judges with tens featured the player who may as well have invented the modern dunk and this competition, the good doctor, Julius Erving and the finger rolling of the Iceman cometh, George Gervin. But to one unnamed commentators jokes, Knick point and style on that same dime legend Walt Frazier was there…as was an WNBA player who in her own debut season for a rookie year was about to start her campaign as that association greatest of all-time. “Lisa Leslie’s more likely to catch a dunk than Frazier” the analyst said without meaning to cause offence to the player who actually in the end caught the first above the rim slam in WNBA history, decades before her Los Angeles Sparks teammate and current star Candace Parker plugged one. And the comment passed without incident. But that was more than twenty years ago. It’s time today to not be so backwards.

And that’s where I digress. Because I guess I’ve kind of wrote the article I never wanted to but would in the last few “introduction” paragraphs. But in a time were as Dallas Wings superstar Skylar Diggins-Smith (who should be celebrated by her male peers for how good she is, not how good she looks) points out, amazing feats in ever evolving WNBA history for players that go abroad in the offseason to play, just to make not even half their NBA brothers do don’t seem mass media newsworthy, but what LeBron James had for lunch is (for the record I’m a Laker for life and I really love LeBron now, but I couldn’t give a tossed ball whether it’s from a personal chef flown halfway across the world, or P.F. Changs across the street), I should be writing more about all of basketball. But in true transparency this writer can somewhat with ownership on himself blame that output on depression. And who lifted this man up out of all that and into this living place now? Women! Mothers, sisters, friends. Right now, now it’s all said and done I just want to celebrate this game and leave all the hate to their phones.

Must Read:
Captain Marvel And The WNBA Ask, 'What Makes A Hero'?

Because last night was worth celebrating as rising above the Phoenix Mercury, 94-84, the Seattle Storm stormed to the WNBA Finals in a best of the west semis to face legend Elena Delle-Donne and the first time Washington Mystics looking to cast a spell even the Wizards can’t. Showing that basketball is not sleepless in Seattle or the legendary Key Arena even if the city is still crying, “save our Sonics”. They still have boom over the television and radio waves even after Frasier has left the building.

Taurasi and Bird, who in these court circles can just go by her last name like the fellow green and white, let it fly legend of Larry. Two true titans of the game. Legends who will always be remembered for their classic body of work and not just for their iconic, game changing ESPN Body issues. They’ve rebirthed the game here. And playing alongside two greats they are just as current as, who hold this games future in their palms (Brittney Griner and this seasons MVP and last years rookie don’t forget, Breanna Stewart), truly take in Diana and Sue embracing postgame after another epic duel. Regrettably it may just be their last.

“Wow that was amazing”, the Phoenix Mercury’s Diana Taurasi told her best friend and Seattle Storm rival Sue Bird, “incredible”. And it really was.

With a broken nose and the Rip Hamilton face-mask going all Kobe and LeBron phantom menace in this hoops opera, Bird led the Storm to a flying victory. Taking over with 14 fourth quarter points that showed the clutch Taurasi who was the closer this night and series. As Bird’s 22 came alive in a Game Five K.O. Taurasi has won 13 of these rounds straight. But last night sadly she was unlucky for some in the Arizona area. Most Valuable Player Stewie had 28 too, but the real MVP last night was called Sue as her step backs truly set their Phoenix rising rival back for good. All the way back to elimination ashes.

“I don’t know if I had a fourth quarter like this in as big of a game in my life, to be honest.” Sue told press postgame before the champagne.

Now the toast of the town the Storm fly to the capital to make their exclamation point Mr. President.

And I just want to know what Bird’s going to eat on the plane.