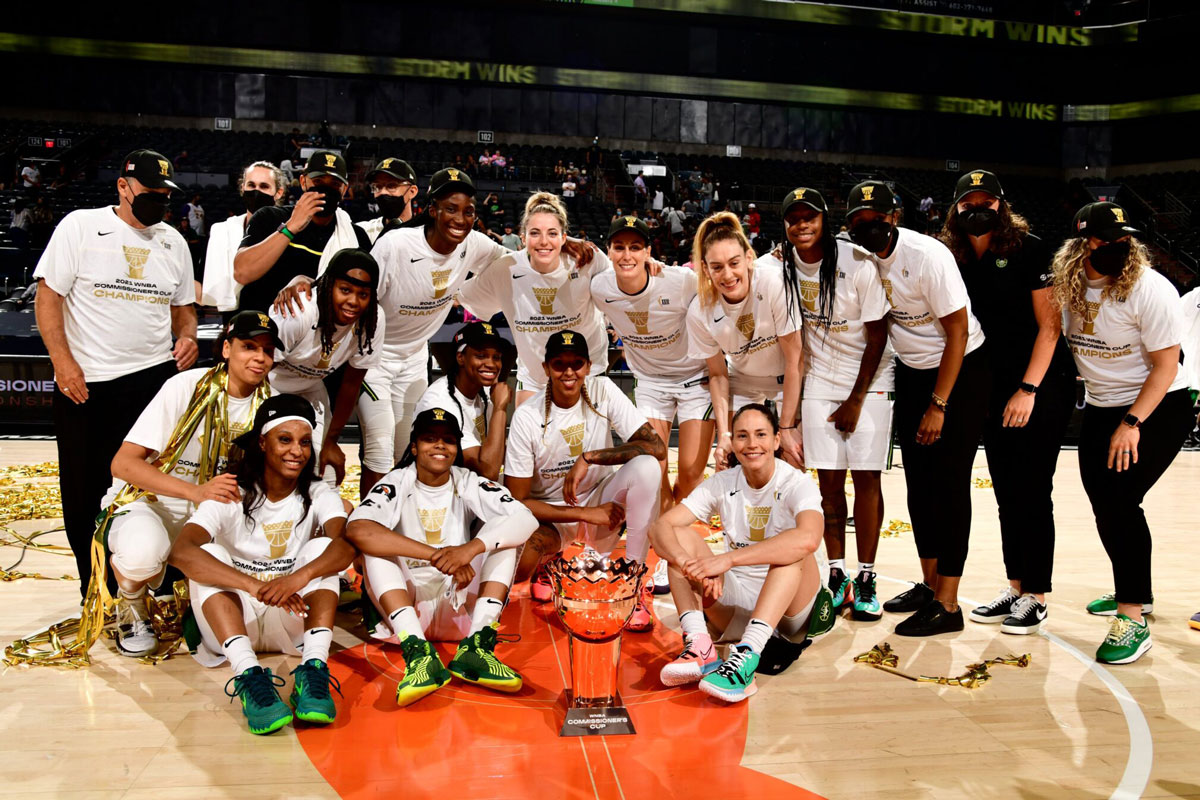 Friday 13th. Unlucky for some, here in Tokyo it feels like it has been raining ever since the 2020 Olympics closed in ceremony.

Team USA are already back home, including the Storm’s Breanna Stewart, Jewell Loyd and five-time gold medalist Sue Bird. Reigning in a different way for the rainy city of Seattle.

Basketball is already back too with WNBA games already forecast. But this one was different. The Storm fronted an inaugural Commissioner’s Cup contest against Connecticut, but there were no spells of Sun.

It was a wash-out as Seattle blew-out the Connecticut Sun, 79-57.

Add this soccer like mid-season side competition hardware to Sue Bird’s war chest of a trophy cabinet.

“Something that I think the WNBA has lacked is its own stage at times,” Bird remarked about this new incarnations inaugural game. “Different aspects of our season, like the Finals, it kind of gets lost, it’s not necessarily our time whereas a great example is the NCAA tournament where women’s basketball has its own stage. So whether or not the Commissioner’s Cup grows into that, I’m not sure, but it’s something the league can sell ahead of time.”

You wouldn’t think Bird or her teammates had just been in Tokyo taking Japan to take gold. Especially two-time reigning Final MVP Breanna Stewart, who had 17 points, 4 rebounds and steals and 3 assist and blocks. All over the box score like scouting reports. Gold Mamba Loyd also had 16 points. Whilst Bird added 10 to the coop.

Do these greats ever get, or take a day off for that matter?

Must Read:
New Cleveland Cavalier Jerseys Fit For A King

DeWanna Bonner and Natisha Hiedeman both notched 11 points. Jonquel Jones doubled up with 10 and 11 rebounds. All as the most storied Seattle and WNBA team became even more legendary for the record books.

Can we count on people for respecting this game now in its historic quarter century anniversary?

Ten (10) pre-Olympic regular season games were designated as Commissioner Cup games. All counting towards this. Banking some $500,000 winnings for the team on top and 30K each for their players. Even the runners-up get a nice 10 grand for their troubles, because as the Olympics taught us second place IS NOT the first loser.

With the rest of the 25th WNBA season set to resume this weekend, what a warm welcome back this made after the games.

It looks like the commissioner Cathy Engelbert is on to a winner with this one.