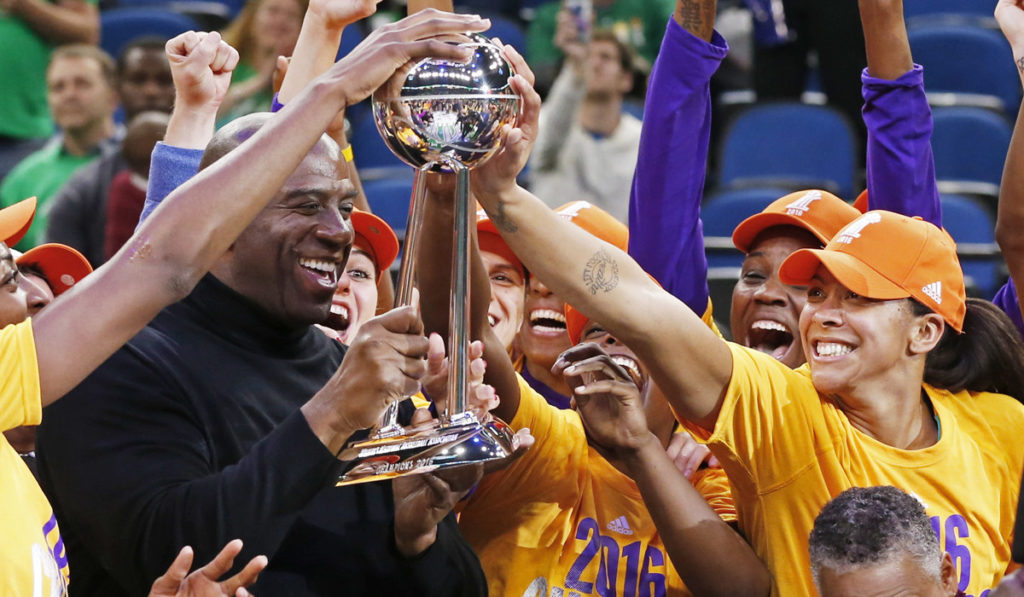 11 lead changes and 1 point highlighted just how little was between the two WNBA franchises who both started the season with 11 game unbeatable runs until they met each other.

Not to mention a full five game series, tied at two games a piece.

But as this seasons MVP Nneka Ogwumike hit a clutch basket with 3.1 seconds to go that was all she wrote folks as the Los Angeles Sparks clinched their first WNBA title in 14 years over the Minnesota Lynx, behind Finals MVP Candace Parker’s 28 points and 12 rebounds.

And to think this dynamic duo was left off the 2016 Gold Medal winning Olympic team that took Rio by storm.

But in the end the Minnesota Lynx’s Team USA stars Maya Moore, Lindsay Whalen, Seimone Augustus and Sylvia Fowles (who Mamba mentality played through the Kobe like pain of a dislocated finger popped back in place), who haven’t had a break all season, couldn’t keep up with two Most Valuable Superstars who had some doubters to disprove.

Maya Moore may have had more points with 23 and 11 rebounds but Nneka’s 12 and 12 iced by her game winning bucket she put back after the Sparks spilled a couple of shots in the paint was so much more. Dethroning the defending champ Lynx who have been in five WNBA Finals in the last six seasons, winning three of them.

NBA purple and gold brotherhood, Los Angeles Lakers legend and Sparks owner Magic Johnson couldn’t have been prouder of Candace as he held her in an emotional embrace postgame (Candace herself getting choked up with a tearful tribute, dedicating the win and championship to late, legendary coach and mentor Pat Summitt) after watching her put on a show. “Thank you so much” she cried, as Earvin earnestly replied, “you did what you do”! High praise from NBA histories selfless G.O.A.T. The majority owner of MLB’s Dodgers will be looking for another big hit from L.A. sports before the young Brandon Ingram, D’Angelo Russell, Julius Randle and Jordan Clarkson Lakers take to the plate and do their thing. But right now he’s just watched his Sparks step up and knock it out the park.

Must Read:
Lynx Take The Spark Out Of Los Angeles In Game 2

Giving the Lynx three strikes infront of Minnesota Timberwolves future Karl Anthony-Townes, Andrew Wiggins, Zach Lavine and Ricky Rubio in homestand support, the Sparks were plugged by more than their new smooth and silk duo that is all fire and ice. From Alana Beard’s game one net cutting winner to Chelsea Gray handling this 11 lead change game with 11 of her own consecutive points in the fourth to ignite the Sparks’ comeback before the game faded to black and backboard red.

As we watched all this teamwork accept what it means to be great we bore witness to not one, but two teams who could rule the WNBA for many seasons and finals to come like the mens Golden State Warriors and Cleveland Cavaliers. The Minnesota Lynx have been here for years, but not since the days of 20 for 20 leading legend Lisa Leslie have the purple L.A. team seen this much gold.

This Spark has started a fire.