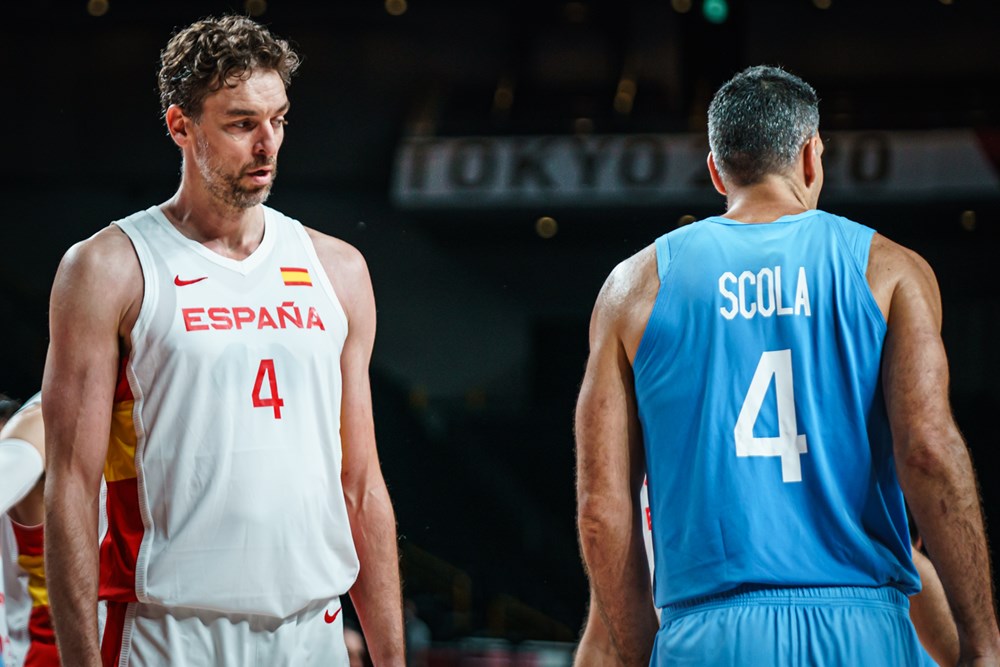 Let’s hear it for them as they leave to a standing ovation and not a dry eye in the house…even if there is barely anyone left in the Saitama Super Arena stadium.

All tied up for a record fifth games, Luis Scola and Pau Gasol have been in as many Olympics as there are rings. Marc Gasol on the other hand has been here since Beijing. And with an assortment of medals in FIBA competition for the trophy cabinet, these NBA and international legends will go down as some of the greatest to every play this game.

Regardless of court, country, or competition.

The Gasol brothers held frontcourt one last time in the 95-81 dance with Team USA in the quarter-finals, Tuesday. The same Kevin Durant led team that today lowered the boom on his new Net, Brooklyn boy Patty Mills’ Australia in the semis. They are now guaranteed a podium position going for gold in the final medal game.

“Just the fact that I was able to come back, play, compete at this level, that’s just a huge success already”, Pau told the press. It really is. Especially after just coming off returning to Barcelona to play for the team where it all started and win a cup.

This basketball brotherhood without borders has been doing it since the long beard and hair days didn’t care. Their full names on the back of their jerseys. These brothers in arms with medals around their neck across all sorts of international competition.

“We had way too many medals. When we started we were never supposed to win that many medals and it started here for me in 2006 in this same arena, so it’s been a hell of a ride,” Marc also confirmed with no regrets.

No question about that.

Now, this international sibling paint partnership will probably be the last time you see these two canvas the court together. Everyone wanted a Laker reunion last year for Los Angeles big man Marc and the big brother his draft rights were traded for back in the day. Even LeBron James who wanted his Defensive Player Of The Year trophy back from Marc.

Now with Mr. Wolf committing to his contract in LA for his remaining year with the loaded Lakers, it looks like that FC Barcelona reunion he hoped for is at least on hold too.

Can Pau hold out that long?

A long time ago they were all in the NBA. The Gasol’s. Luis Scola when the fellow Texan Houston Rocket team player used to have hair like the San Antonio Spurs’ Manu Ginobili. Looking slick and straight off the surf.

Now in his final Olympic Games, grey and hench like Josh Brolin, some have been calling him Cable like the ‘Deadpool 2’ character. One things for sure this guy is a straight mercenary when it comes to Argentinian hoops on the hardwood.

But how we will miss them so.

Scola, 41 like Pau was still here. Playing and loving it like LeBron. Or like these three international Olympians were a Brady bunch. Averaging 19.7 points per, Scola was scoring too. Putting up more than just keeping up appearances.

Australia may have beaten Argentina handily 97-59 on Tuesday, but this South American team made it all the way past the preliminaries to the quarters…and Luis took them there.

Walking off the floor with the game ball, the tough, physical power forward may not have won the contest, but he captured all our hearts.

What’s so good about goodbyes Smokey Robinson once asked. Well, when you can pay respect to three miracle players unbelievable last campaign’s, that is more than a consolation for your commiseration.