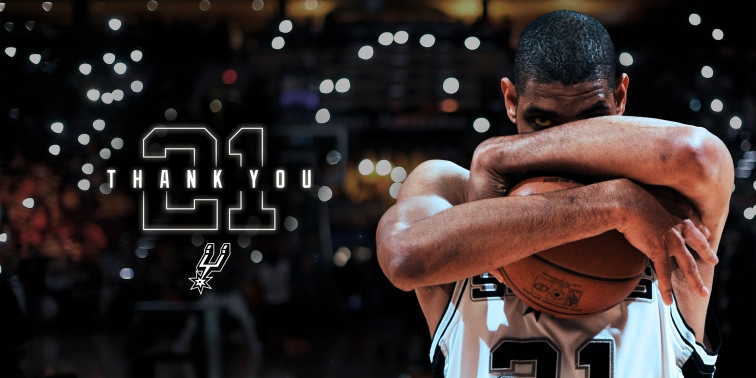 19 years is enough time for someone to become a full-grown adult. Let alone a full-time basketball player for one formidable franchise. But after Kobe Bryant’s farewell tour with the one team he’s always played with, the Los Angeles Lakers, his court contemporary and great rival Tim Duncan is quietly calling it quite a career after almost a jersey number in seasons with his San Antonio Spurs.

Blessing basketball with almost two decades in the game, after 19 years Tim Duncan will go down as the greatest Power Forward that ever delivered the ball in the post (sorry Karl Malone…you’ll always be the Mailman). And for sure the greatest San Antonio Spur to ever suit up in silver and black-even colder than The Iceman, George Gervin-as he meets his mentor David Robinson, the Admiral at the port of retirement with a glass of champagne and band of brothers salute. The man that brought him into this game and years of championships and contention conviction as he hands everything off to player prototype LaMarcus Aldridge, brought in to play with…and eventually replace him (just like Duncan was David). Not to mention dominant defensive wing (now Kevin Durant has chosen to sign somewhere else out West) Kawhi Leonard and his former big-three contemporaries Tony Parker and Manu Ginobili who have one sneaker in retirements door and the other still quick stepping on the floor.

Trademark cradling the ball to his mouth, maybe kissing it or whispering to it like a precious son, you could always bank on Timmy, especially his off the glass shot that left his mark for 19 seasons straight. To basketball purists he made consistency sexy, and heartbreak to other arm chair fans sleeping on him misery. Want to know whose fault it was that those three-peating new milleniuum Lakers didn’t dynasty win more? Shaq’s? Kobe’s? No…neither. It was Tim’s! But he deserved more than to be told by the media he had the right to win those trophies. He owned them and his part of Larry legend. Like Boston defensive big man Bill Russell before Bird’s to O’Brien. Check the engraving. Like a new generation post-2000 Celtics, before Paul Pierce doubled up with Kevin Garnett and Ray Allen this guy made the San Antonio Spurs franchise as storied as a Sixers, Bulls or Knicks back in the day. Forget the Lakers (yeah I know…that’s me saying this).

Must Read:
Mike Conley Jr. Conducts Himself Like An All-Star...It's Time To Make Him One

A lot may have been made of the Mamba’s last stand, but this lone state star will Spur on some mesmerizing memories now his sneakers are no longer clicking in San An. From the Alamo to the S.B.C. as this Texan titan takes his last trip up the riverwalk you know this path will lead him to the corridors of the Hall of Fame where the Naismith basketball world will finally make some noise for the unsung hero who silently plugged away at an NBA career like no other.

As the T-Bot shuts down 19 years off the assembly line that were anything but regular, the 20 and 10, fundamental machine leaves behind a legacy of legend as old testament and tried as the Wild West. A top draw to the end, the five time MVP (between the 15 time All-Stars regular season and Finals) who put that many banners up in San Antonio’s attic, deserved his number to be put in those very same rafters whilst he was still putting it down as a player. Let alone San Antonio erecting two towers of bronze right outside the Spurs arena. Timmy we thank you for making basketball exactly what is and what it should always be.