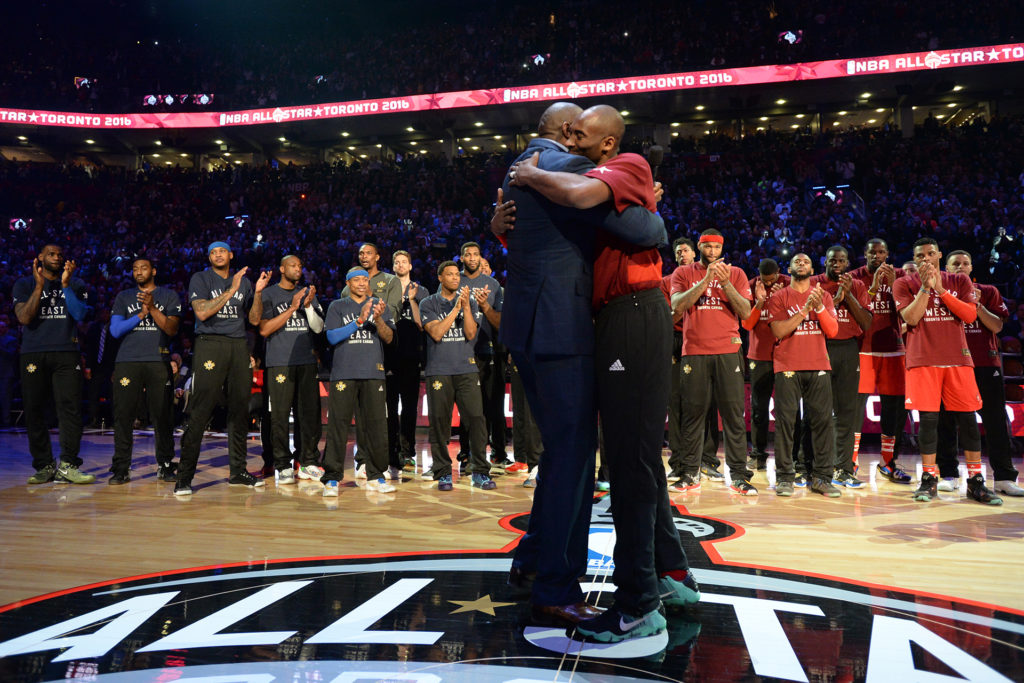 Oscars. Grammy’s. New York Fashion Week. The Superbowl. Even February 14th for all you Valentines. In the six strong second month of the year not a single thing has any one thing on what came out of the 6 this lovers weekend.

The 2016 NBA All-Star Game from Toronto. The first in Canadian and NBA history.

Take that Vancouver! Sorry to get grizzly.

Forget movies, Hollywood couldn’t have scripted this show better. Forget music, Drake was here for his night in promoting ball in his T-Dot city of the 6. Even the catwalks of Manhattan had to take a back step to the awesome attire rocked by your East and West All-Stars, from King James to Chef Curry and Ontario’s very own Kyle Lowry and DeMar DeRozan of the Raptor pack in the Dinosaurs park. Superbowl? What Superbowl? You just have to love this game.

For a deeper analysis of this weekend and what it meant to the court culture of Hockey country Canada, check out BasketballBuzz’s Ronny’s own outstanding article. But with B.B. in the T.D., back in the Naismith home of Basketball, here’s 6 things we took from the half dozen city.

Sure the Skills comp won’t challenge the other marquee events for popularity, but fundamentally you just have to love how this all sounds. Especially when top pick Karl Anthony-Towns of the Minnesota Timberwolves clawed his way past fellow Kentucky big man alumni, Anthony Davis and DeMarcus Cousins. Who’s wild?

Two. Fellow Timberwolves cub Zach Lavine and his game MVP 30 points helped lead Team U.S.A. over the rest of the World, 157-154 in the Rookie/Sophomore challenge which let all sorts of young guns draw their six shooters. Like the Los Angeles Lakers back-court brotherhood of Jordan Clarkson and number 2 pick D’Angelo Russell. Not to mention homecountry boy Andrew Wiggins’ 29 points and nine dunk-a-thon.

Lavine and his beautiful jersey tribute to late coach Flip Saunders that flipped his digits, doubled up in more ways than one as he defended his Slam Dunk Contest crown with a free throw line, take off J. Still as great as he was he robbed the hardware from the Air Gordon of Orlando’s Aaron Gordon, who assisted by the Disney reject Magic Kingdom mascot performed feats of aerial gymnastics that would make the Harlem Globetrotters look like Mike in his last A.S.G. Lavine may have won the fight but Gordon’s creed and legs up cradle won the night! Now how is that jam for your toast?

One clear winner this weekend in the Pacific Splash clash between Golden State Warrior money-ball brothers Stephen Curry and Klay Thompson. Steph Curry may have the shot, but it was Klay’s day as his 27 beat his teammates 23 in the final rack of the final round. The Chef may have came in second place to Thompson’s Larry Bird but it was all smiles and high fives just like the day that would follow these league leaders.

The actual All-Star game itself took it higher than Toronto’s CN Tower which made for quite possibly the greatest mid-court logo design in A.S. history. Above the rim and down the hole to the tune of a 196-173 West (Brook) win this was 2K at its video game finest. You couldn’t green screen match beautiful Basketball and perfect plays like this. And thunderous OKC “second star” Russell Westbrook became the first All-Star in history since Atlanta Hawk legend Bob Petit to double up as game MVP. The dunking, slam stick of dynamite exploded for an incendiary 31 points, 8 rebounds and 5 assists.

Must Read:
Fun Guy Kawhi Leonard Gets His Ring

But it was all about number 24. Even if Kobe Bryant had a nice 10 points it was all about the 20 year veteran’s 18th and last All-Star classic. He won the Dunk Contest as a Rookie in his warm-ups and scored a trilogy of MVP’S, including one in his born and raised home of Philadelphia and one co-sign share with former dynamic duo teammates and Hall of Famer Shaq. From Magic’s introduction to his tip-off with new King LeBron James, the greatest since and save Jordan gave us the sweetest swan song stat sheet of his league wide retirement tour in a city he one dropped 81 on. The only name that owned this weekend more than Bean was that of the city of Toronto, making National Basketball Association history in the closing chapter of this mans career. One that started with a draft from the city that will fittingly hold the 2017 NBA All-Star Game.