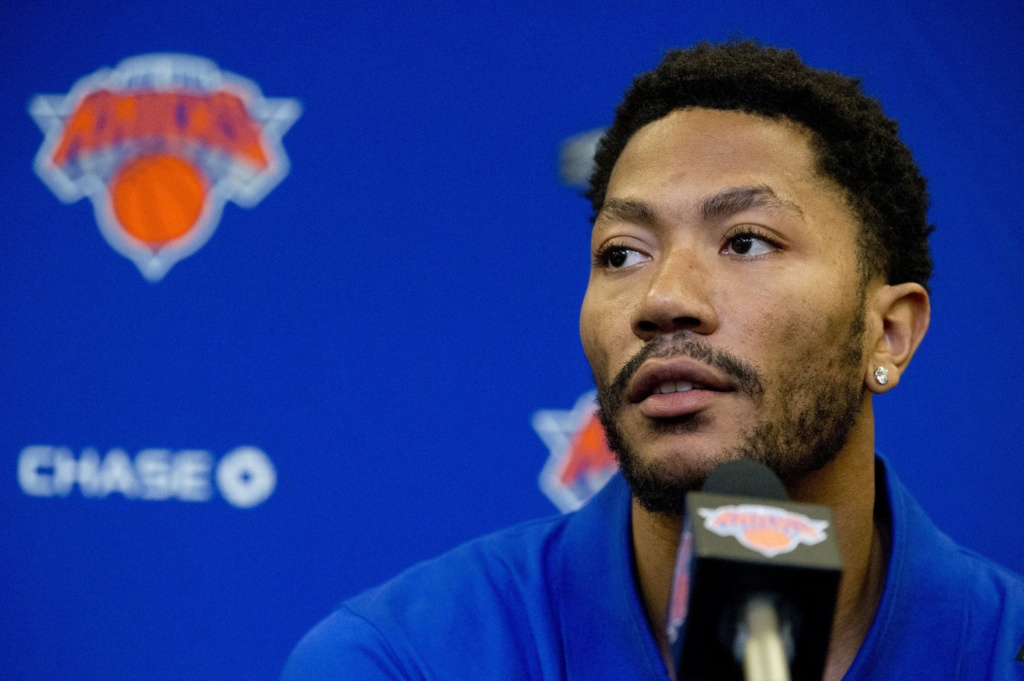 Can D-Rose Really Change The Knicks?

The New York Knicks have made yet another splash via free agency.

In recent history, the Knicks have not been afraid to sign big names in free agency, Amar’e Stoudemire, and Carmelo Anthony comes to mind. Although both of those players played well in a Knicks uniform, they could not co-exist, which ended “when he [Stoudemire] reached an agreement on a buyout from the franchise, league sources have confirmed,” to ESPN.

The main problem behind the Knicks struggles is that Anthony is a ball-hog who demands the ball on every offensive play. Also, according to Stoudemire, Anthony had issues with other players gaining stardom (i.e. Jeremy Lin), and Stoudemire had some issues with how Anthony has handled his leadership role on the team.

How much of this is true is anyone’s guess? These comments can be seen as a player bashing on his former team, and its superstar who relegated him to an afterthought, or they can be interpreted as someone giving the world insights on the Knicks locker room.

In Anthony’s defense, when asked about Stoudemire’s comments, Anthony immediately pointed out to Kristaps Porzingis, the Latvian rookie sensation, who took the NBA by storm last season, and became a fan favorite.

So, in the aftermath of this hot mess, the Knicks signed Derrick Rose.

Rose was a sensational, breathtaking, YouTube highlight-reel waiting to happen player in Chicago until April 28, 2012 when he tore his ACL.

Unfortunately, for Rose this was just the beginning of his descent to hell. Following his knee injury, Rose missed the entire 2012-13 NBA campaign. He came back, supposedly, ready for the 2013-14 season, but 10 games into the new season, Rose was sidelined again, this time with a torn meniscus in his other knee.

In February 2015, he was sidelined with a torn meniscus in the same knee he was just sidelined with that injury. However, last season Rose was as healthy as Bulls fans could have imagined. He played in 66 games and averaged 16.4 points per game.

So, based on the latest season in Rose’s career, it would appear the superstar point guard is coming back to his glory days, but will his knees hold the entirety of a grueling NBA season?

These two players have been to numerous All-Star games, and are on posters in every boy’s room across the world, but will their egos accept that there is another big fish in the pond?

And, although he probably will have less of a saying in this love triangle, Kristaps Porzingis will want his as well.

This move has the potential to be great for the Knicks because the Eastern Conference is so weak, this lineup can get them back in the playoffs, or at least relevancy. This move also helps Derrick Rose re-establish himself as one of the best players in the NBA.

But, for as great as this move can be, it can also explodes in everyone’s faces. Now, the Knicks were much smarter this time around than they were in recent years, with the contract Rose signed.

Details of the signing

Bleacher Report’s Jared Dublin details the situation, “the Knicks will have a nearly $32 million charge (150 percent of Rose’s 2016-17 salary) attached to their books for the summer of 2017, per Basketball Insiders, unless they elect to renounce his Bird rights. If they attempt to keep Rose, the Knicks would actually lose cap space until he signed a deal that started with a first-year salary less than the amount due to Lopez in 2017-18.

If Rose gets hurt or doesn’t play well, the Knicks can wash their hands at the end of next season and enter the summer of 2017 with loads of cap space, depending on what they do in free agency this summer. They’d have then dealt away two assets for only a year of Rose, but one can argue it was worth a shot to see if he could recapture the magic.

If Rose does play well, though, that puts the Knicks in an even more precarious position. The best-case scenario is that Rose returns to something resembling his former self and, along with Carmelo Anthony, Kristaps Porzingis and whomever the Knicks sign this summer, helps lead them back to the playoffs for the first time in four years.”

But, the biggest takeaway from Derrick Rose’s arrival in New York City is that free agent Kevin Durant has become (very) interested with what is brewing in the Big Apple.

USA Today reported on June 29, 2016 that the Knicks are now on Durant’s radar following the trade for Derrick Rose, the development of Porzingis, and his good friend Carmelo Anthony.

So, was Rose’s signature Phil Jackson’s master plan to lure Kevin Durant in town to bring the Knicks back to the playoffs?

The front office would have to be pretty good to work the dollars of this hypothetical, for now, move. Plus, signing Durant would also assure the Knicks and their long-deprived fans a bright future with arguably the best player in the world.

Durant’s agency Roc Nation has hinted they’d like him to go to a big market to really capitalize off of his NBA stardom, but the player rejected this notion because it does not bode with his personality.

We will see in the coming days, how all of this turns out, but one thing is sure Phil Jackson can resurrect his career as an executive with the signings of Derrick Rose, and Kevin Durant.