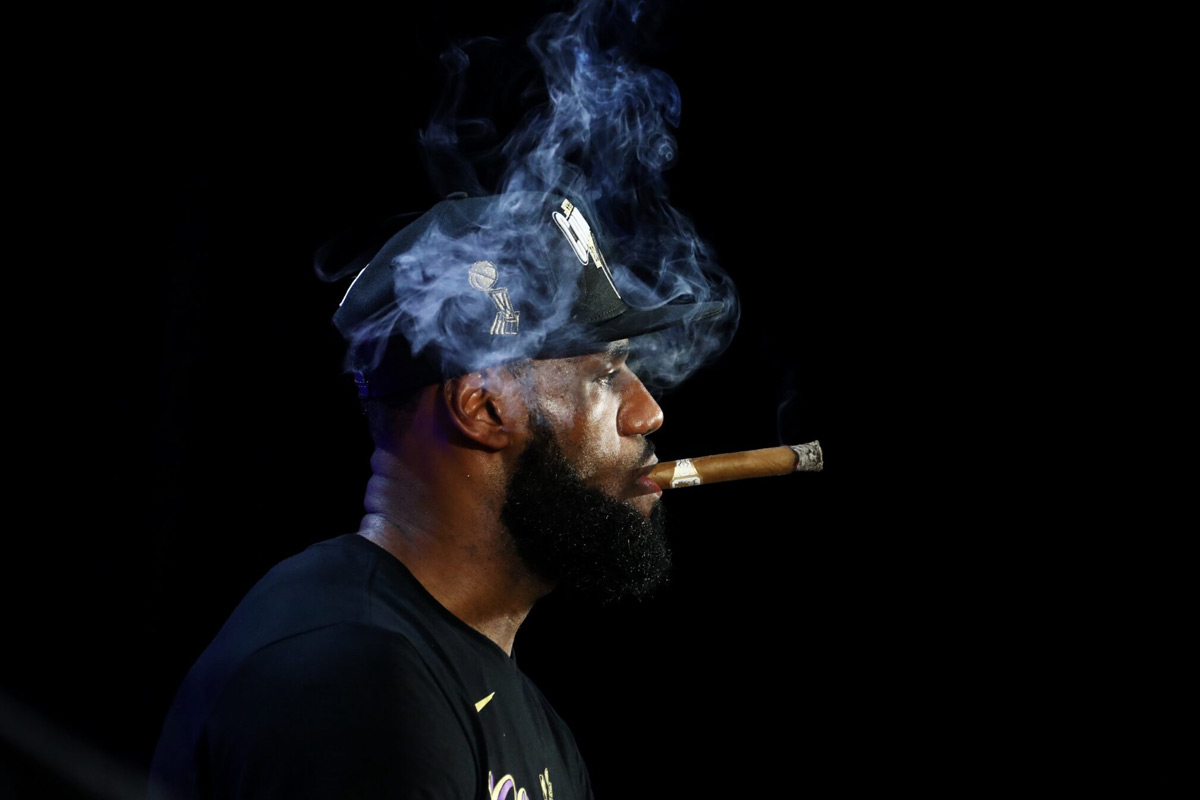 Lebron James Puffing On A Cigar Whats Next For The Lakers

The champagne has only just been taken off ice like the Bubble barely popped, but you know they’re already asking it. So let’s get it cracking.

What’s next for the 2020 champion Los Angeles Lakers?

As LeBron puffs the championship cigar like Auerbach, he’s got his damn respect but he knows the revenge season is still in play. Year 17. Four titles. More Finals than exam papers. If the King gets one more ring he will tie Kobe after winning this one for him. Another and it’s all like Mike.

For the Lakers they now tie their biggest rival and the most storied franchise in NBA history, the Boston Celtics, for championships.

That could all change next season, whenever that starts. It’s time for the takeover like Jay-Z rapping over The Doors.

With the Tokyo 2020 Olympics postponed until next summer and more gold on the mind of the throne taker sitting on top of the podium, expect next season to be shortened to keep in time with everything. Best believe no asterisk will mark this one, either. Expect the Lakers to get slim pickings in the upcoming 2020 NBA Draft … or maybe a steal. You know their track record (see Kuzma, etc.). However, that’s all for the Twitter analyst birds. The Lakers have bigger fish to fry … or re-sign.

Ten free agents in total. That’s almost the whole squad. Time to do work like a Kobe and Spike Lee documentary movie.

This is no ‘Last Dance’ for the King. LeBron’s ready for his Hollywood sequel as he is his one with Bugs Bunny in ‘Space Jam 2.’

This one’s for all the carrots.

The biggest free agent to sign is his Kareem to his Magic. His Shaq or Pau to his Kobe. Anthony Davis. Who still has a player option and is free to explore all the possibilities. If he bounces after one season and chip like Kawhi Leonard out the 6, don’t be mad. I want to see no jerseys and lighters in flames enraged. Just appreciate. All that he’s done and the legacy he’s left. He’s already a Laker legend, but oh how I don’t want to see him in the rafters yet. Just think of how much more the new dynamic duo in purple and gold could do as they try and out smoke Red’s Celtic green.

Must Read:
'Da Kid' Kevin Garnett Has A Big Ticket Back To Minnesota

Unless AD ends up in Beantown for the ultimate next-chapter script flip in these storied teams’ epic rivalry. However, the greenbacks on where this guy will land other than LA, is his hometown of Chicago. Although, we have faith he’ll stay dreaming for more in California.

Then there’s four other player options on the table. KCP, who after a stellar postseason has fans filling out apology forms already on Twitter, but it’s going to take a lot more than that to earn his respect. Just like playoff Rondo, who heard it from fans despite being one of the purest points of all-time. One who has now won for both Boston and L.A. The last time this team took a photo ‘do was in assistant coach’s clothes. So maybe there’s a position there, like Jason Kidd. We think he’s built for one more go round though.

JaVale McGee, who was benched for most of the playoffs, has choices too, but the Lakers need to make a move for him early. They would miss his energy. Then there’s Avery Bradley. Again, some toxic Twitter users have been giving him hate and heat for sitting this last one out in Florida for the health of his son.

Are they for real, like those sending Danny Green and his wife death threats? Did you see how much the Bradley family just donated to the WNBA? $30,000. Besides, like Rob Pelinka said in his call, he’s as much a champion as the rest of the Lake Show. The reason they even made it this far. Give him his ring … and his respect.

For the rest of the free. All smiles and making it up to L.A like his tweet, Dwight Howard has been too big to ignore. As has the hustle and heart of late-season addition Markieff Morris. The same can be said for the big name late-in-the-game signings of JR Smith and Dion Waiters, who were Bubbling in Florida before being used sparingly in the playoffs. The Lakers could eat up their contracts like edibles, or down them like Hennessy. Either way, both players are more than those reputations. They are champions.

Must Read:
Paolo Banchero is the Duke of the 2022 NBA Draft

Let’s not forget about the Lakers’ latest Mark Madsen and Rony Turiaf off-the-end-of-the-bench motivation in Jared Dudley. One through 15, just as important. Just look at what this Elmer Fudd has done for the fans. His number 15 jersey is seen in the stands almost as much as a 23 … but never a 24.

Many (me included) thought the Lakers should have taken a gamble on LeBron’s friend Carmelo with the last roster spot instead. One that paid off for Portland blazingly. The Lakers could right this mistake this off-season, if they go after this other Anthony too and finally get their man like they did AD. They could even bring the whole banana boat back before ‘Bron splits by making a move for Chris Paul. Which could solve the point problems they’ve had since they lost Lonzo instead of Kuz in that blockbuster move for AD.

However, it’s all good. They’ve still got the GOAT, Alex Caruso.

Now how about DeMarcus? Is it time to relate to Cousins again, who they amnestied for Marcus’ Los Angeles twin brother before the deadline? Former Pelican front-court partner Davis reached out to DMC after the win, and a move back does look on the cards like the Lakers’ championship hopes confirmed when they brought him in last summer. Remember how people (me included) initially reacted when they replaced him with Dwight after he suffered a campaign-crippling injury?

It can all change again.

There are plenty of other free agents in the pool. Toronto’s own Fred VanVleet. Los Angeles-born DeMar DeRozan. The Clippers’ Montrezl Harrell. The Celtics’ Gordon Hayward. Rivals. Even an old friend they should have never let go in All-Star Brandon Ingram.

How about this for a move? Trade the promising Kyle Kuzma and a pick or two and some cash considerations for the prime of Washington Wizard Bradley Beal? That could be a better big three threat. He’ll probably never leave the House of Guards in DC, but it’s worth a deal.

Either way, Los Angeles is finally an attractive destination again, like there was no smog. It must be the sun. Or Hollywood’s latest run at the Disney World multiplex.

It’s a new Showtime and the show has only just begun.