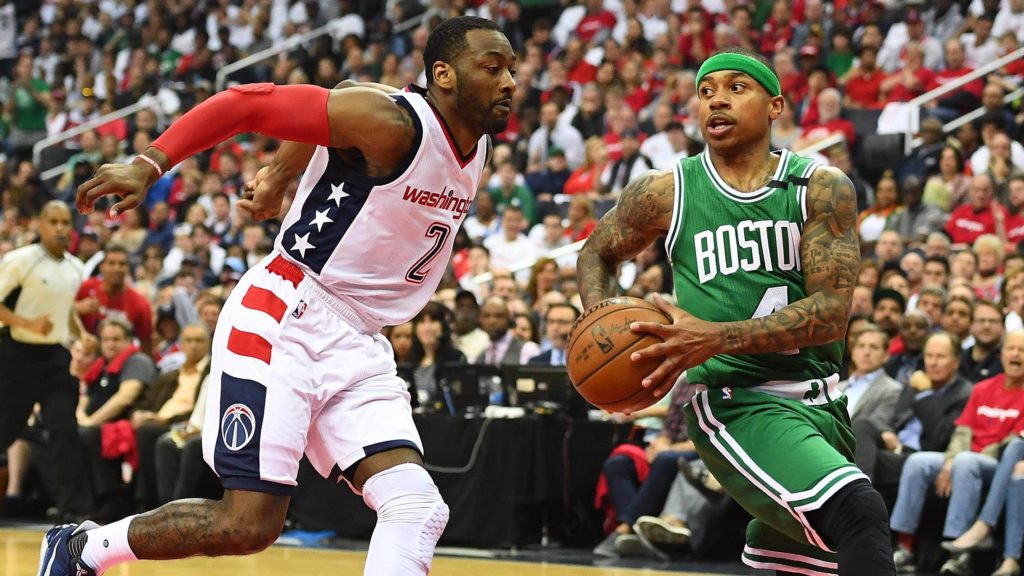 It’ll put a spell on you.

These NBA Playoffs. There’s nothing quite like them. Like a hit Hollywood flick. But this is even hotter than the pre-Summer season of ‘Guardians Of The Galaxy’, ‘Spider-Man’, ‘The Mummy’ and ‘War For The Planet Of The Apes’ blockbuster movies. I mean in this ‘Where Amazing Happens’ script what better story is there than LeBron James’ Cavalier homecoming in his Ohio land? Or Chef Curry re-heating his band of Warriors with the aid of Durant for the rematch?

Well…just you wait…hold up! There may just be one between our D.C. capital and Beantown that may shake everything up like a coffee grinder. A story critical to this country…and we aren’t talking about that Donald.

But this could Trump everything (Sorry! We swore we’d never do that, let alone use that word ever again). Sure the King and all the lands men against the now extinct Toronto Raptors rolled through the 6 like, one, two, three, four and five. But as this 2-2 series between the storied Boston Celtics and House of Guards Washington Wizards could (will) go the full seven, whoever the Cav castle faces may just storm the moats and walls.

Now remember, before you witness…you have been warned.

The Wizards really have pulled all sort of metaphors and cliches, basketball and namesake out the proverbial top hat. They looked down and out this year after Coach Scott Brooks couldn’t land hometown hero free-agent Kevin Durant, despite a years long campaign. And even though the franchise has the best backcourt in the L off Bradley Beal street, the most exciting news coming out of D.C. basketball looked like the Mystics trading for Chicago Sky giant Elena Delle Donne. And with just mere days before the new WNBA season tips off it will be again. But despite the Wizards being covered with a cloak less convincing than Trump’s toupee, the Wiz have shot through all that like the Bullets they used to be behind (and boy do we mean behind) the break-neck speed of yellow spotted guard John Wall.

In the league legendary legacy of basketball’s Boston the Celtics were busy pulling up their Stances to be anything like their Baseball neighbouring Red Sox in turning the new Boston Garden into an arena as legendary in this town as the cathedral of Fenway. Guys like Avery Bradley, Kelly Olynek, Marcus Smart and Jae Crowder helped this crowded court of role players, but this franchise team needed a franchise player. And who could sound better for a franchise team that was storied in the 80’s than a name for a small floor general, almost as big as his son than that of the monkier Isaiah Thomas? This pocket dynamo leader is the type of new Boston player the old green-collar Celtics could only dream of having. In a new age for P.G.’s the I.B.M. old-school I.T. generation is the future right now. Isaiah has took it even higher, rising above it all like his trade from the ashes of the Suns in Phoenix. He has even bravely played through the brutual pain of losing his sister and in representing for the Thomas family. Every play, every bucket, every game and every win is for her.

He even had one of his teeth knocked out in the first quarter of the first game of this second round series. But brace yourself because nothing will stop this young man, tooth or nail from making sure his team doesn’t face the K.O. The only one doing the eliminating will be him.

That is unless he runs into the only Wall welcome in Washington as dear John W is as good as they come. Sure in this triple-double, MVP racing Point redux age of the guards everyone is talking about former Oklahoma City Thunder teammates James Harden and Russell Westbrook like they are the new era Chris Paul and Deron Williams. But with Westbrook out the West playoff picture, the Most Valuable Player contest may be over. And even if there is no award worthy victory come the conclusion of this seven seal of points there is nothing quite like this head-to-head. As two of the quickest, next best (only underrated now), players in the association Isaiah Thomas and John Wall match-up as well as their best in the league, but overlooked big-men allies at the centre position, Al Horford and Marcin Gortat. Making for our pick of the playoffs to roll with like off a high-screen.

Must Read:
If You Come At The King You Best Not Miss

As this is basketball heaven.