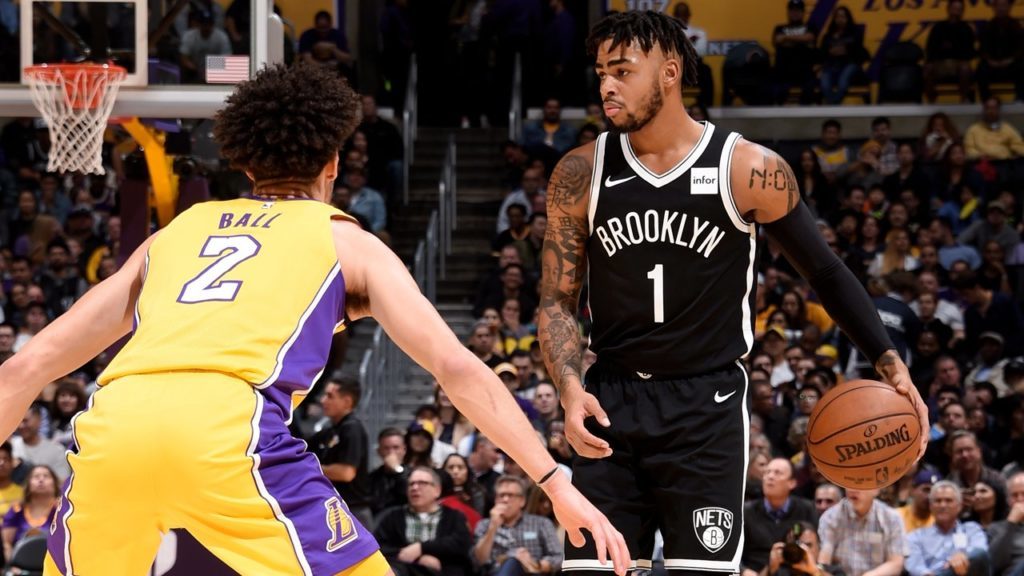 Ice ran through the veins and the corridors of the STAPLES Center last night as D’Angelo Russell returned to Los Angeles for the first time since the Lakers traded this number one to the Nets just days before they drafted their new number 2, Lonzo Ball.

And you could have expected the atmosphere to be a little…well for want of a better word, icy.

But it was all diplomatic as D-Lo returned to cheering fanfare from the home crowd faithful. Coach Walton wanting a “win-win” that works out for both parties in the end as he told the pregame press. While former backcourt brodie Jordan Clarkson even added that the Lakers were “just not the right fit for Russell”, not the other way round. As the man they should have just moved to a more natural shooting guard spot alongside Ball for the best backcourt in the associations future came to show the new Lake Show one man they will miss in their youthful revolution of Lonzo, Ingram, Randle, Kuzma, Zubac, Nance Jr. (out for 4 to 6 weeks after fracturing his hand in a last second loss to Lillard’s Blazers Thursday) and Jordan.

D’Angelo probably got no sleep since Brooklyn on his Best Coast road trip. But he didn’t show it as his 17 points, 7 rebounds and 7 assists was more prototypical point guard then the cold front burning many expected. As in his duel with the P.G. who took his spot, Lonzo Ball rebounded from Shaq’s comments about being a Laker star who goes scoreless in 29 minutes (I guess the Big Aristotle doesn’t believe in Magic) to notch 6 points, 7 assists and 5 rebounds.

Number one may have beat number two in this one, but in this battle the Lakers won the war and got the better of the B.K. Nets 124-112 at home.

But in a game that saw the “other” Lakers rookie Kyle Kuzma continue his rise with a double deuce of 21 points and 13 rebounds filling in for Larry junior, this revenge match actually belonged to another player who was part of that D-Lo make way for Lonzo trade. No not center Timofey Mozgov, but former big-man of Brooklyn, Brook Lopez. One of the best in the L at 7 feet who had an amazing 34 points and 10 rebounds as the third Laker in double/double digits (sophomore sensation Brandon Ingram had 18 and 10 and one big revenge block on the other end of the floor after being swatted on the previous play for the second consecutive contest). Lopez even showed from three just how much range he has as Brook went further downtown then back in the borough of Brooklyn.

Take that back to the B.K.