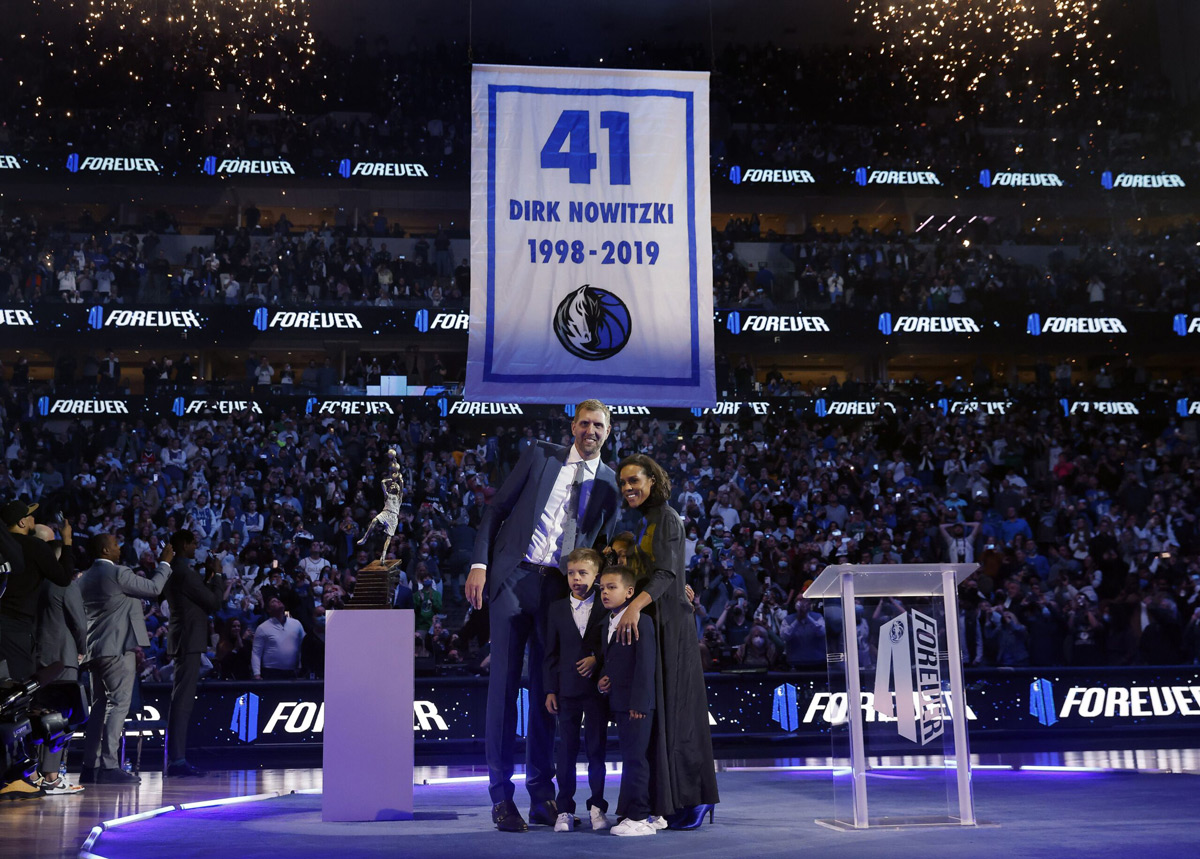 That’s the name of an amusement park in France whose skyline has always looked like the future. Even when it was opened way back in 1987. There’s even a huge ball dropped in the middle of a building like a basketball through a hoop. One that could even rain on New York’s New Year’s parade in Times Square.

But this futuristic cityscape has got nothing on the one of Dallas, Texas. The old west town that could even make Los Angeles’ cinematic display look like something out of classic Hollywood.

And last night the neon crystal ball on the downtown Reunion Tower read one thing.

The surrounding architecture lighting up like Vegas, all in his name.

Because this night was for Dirk Nowitzki. As the Mavericks raised his number 41 to the rafters with the 2011 championship banner he single-handedly put there after dethroning the King. To the tune of averages of 26 points and 9.7 rebounds per.

People forget this scorching scorer is sixth all-time in points scored in the NBA, with a grand total of 31,560.

The greatest international player of all-time like he is a Maverick, until Luka Dončić calls it a career, had a tenure like no other. A Mavericks lifer after Mark Cuban and Don Nelson took a chance on a skinny kid from Germany.

He truly changed the game and the Texan franchise’s state of basketball. Making the big-man role positionless, between the crossover of Iverson and the range of Steph Curry transforming the former seven-foot game into a small ball revolution.

There’s no current, reigning MVP without Dirk. No joke.

Now his iconic, formerly awkward jump-shot that is now a thing of basketball beauty and purity will be immortalized in a statue that Cuban previewed at the half of the Mavs 99-82 win over the Golden State Warriors.

Must Read:
'Melo and Malik Monk make the Lakers matter

It will stand outside the American Airlines Center like Jordan outside United for the Mavs GOAT.

Revolutionizing the sport around the world. Dirk could post up with that shot and also had one of the most legendary fakes and drives to the basket for a two-handed flush that was half flash, and all automatic like the no nonsense of Texan, Western San Antonio Spurs powerhouse rival, Tim Duncan.

Young guns should be calling up this pure shooter like Bird for that sort of skill teaching. Just like they do Hakeem Olaujawon for the ‘Dream Shake’.

You know Luka, decked out in a Nowitzki shooting shirt and ‘#41 Forever’ on his signature Nike sneakers, does.

Dončić got to play with Dirk and Kristaps Porzingis coming off a hot New York minute in Nowitzki’s final year. But injury and father time’s retirement stopped us from seeing the greatest international big-three on paper, on court in their prime.

That didn’t stop current coach Jason Kidd from offering Dirk a 10-day contract. Hey, for all the 40-plus year olds making a comeback right now during all these COVID protocols, why not?

After 21 seasons, number 41 and Mr. Maverick Dirk Nowitzki deserves his rest. Even though we know the special advisor to the Dallas Mavs could still hit from downtown. All the way to the confetti from the clouds of the rafters that fell like snow in every city right now, as his jersey rose to the ceiling.

Now all that’s left is to take a walk down the Hall.