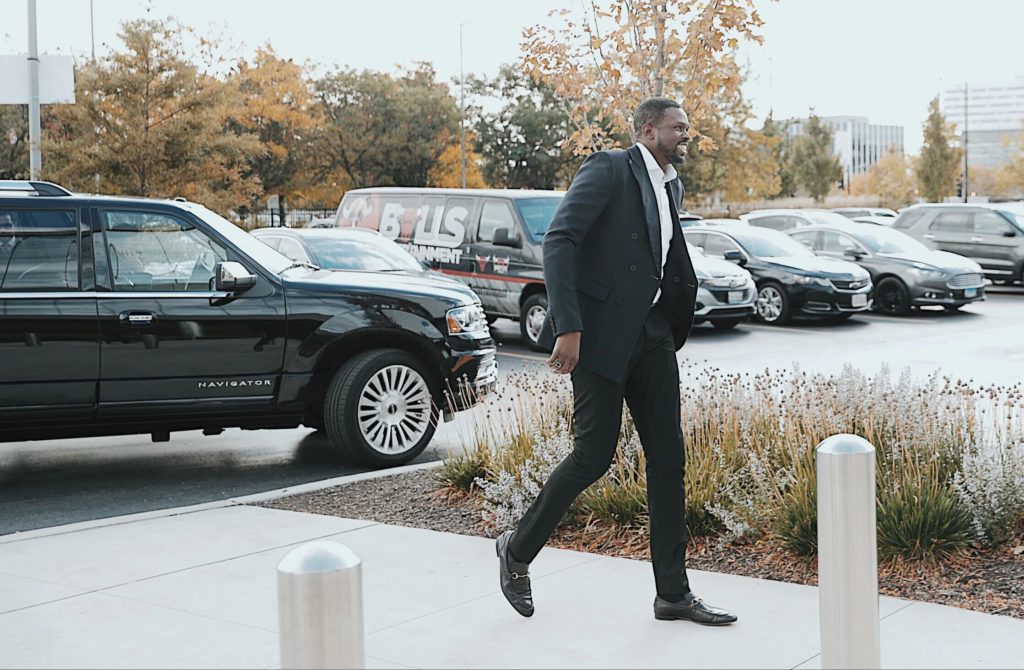 10 years ago this writer holding a microphone as nervous as if he was about to get his Bill Murray on in ‘Lost In Translation’ and perform karaoke for the first time in Tokyo, but with no Scarlett Johansson, palm sweaty, knees weak, arms heavy…moms spaghetti (and on the surface he does NOT look calm and ready) is taking part in his first press conference…let alone his first NBA one. All for a major magazine for his first writing job, just a mere month after he wrote his first ever article for what we the British call, “a laugh”. No Buzz, no blog. And who was my first question too?

No other but the commissioner…Mr. David Stern.

But as Stern as you could call him, the pre-Silver commish was the most warm and gregarious you could imagine. That’s when I got a little wind under my wings like I was wearing Air Jordan’s for this NBA London postgame Chicago Bulls vs Utah Jazz presser. I had a few questions for then Chi-town coach Vinny Del Negro. I don’t think I had the balls to ask Coach Sloan anything. But apparently I had enough confidence to tell the then Jazz leader Deron Williams that his team could test my Lakers…he didn’t agree (there’s the spirit D-Will). And then in walked the man of the hour. The whole reason this game was here and at the very least taking off on these shores. Sudan born but British raised Luol Deng. He too was kind enough to give me a quote worthy answer to my question. Then as he left past the cameras and tape recorders I reached out my hand and he shook it back.

Thank you for that Luol, and for everything you’ve done for British basketball…and also for being part of my beloved purple and gold Lakers for a season or two (or more as fate would have it). Although most fans who can’t look past that massive contract fail to see that the most underrated superstar of this era was worth every penny when healthy…no Lake Show aficionado talks smack about the Steve Nash cash.

Now as this writer a decade later pens this in a Japanese residence aiming to have his own contract to remain here throughout the 2020 Olympics in Tokyo, a week after taking in the cities NBA Japan Games featuring the Houston Rockets and Toronto Raptors, I look back to that Chicago Bulls London game of 2009 and the 2012 Olympics that came in London a few years later and everything you’ve done for the sport in my homeland and host nation. Knowing that from Brixton to Sudan you truly are a global ambassador like Dikembe Mutombo and like that mountain of a man will be at many a London exhibition for the National Basketball Association post career, no finger wag. No one-apart from former Orlando Magic big John Amaechi who truly changed the game from an equality perspective in the locker room-has done more for this game in the British Isles.

Must Read:
Will Three 'LABron' Billboards Outside Downtown L.A. Lead To A Hollywood Ending For The King?

But this article isn’t about the U.K. Or even NBA Africa. Although that, just like your incredible and inspired charity work is worthy of its own book…let alone article. This is about the untouchable city of Chicago, from De Niro to Capone. The Windy City and the changing season you brought in with a gust and the Derrick Rose, Joakim Noah and Taj Gibson team of the new millennium and hope…that in the legendary United Centre seems as lost as the elevated train town that surrounds it, albeit still so classic. As American as apple pie…or Michael Jordan.

As you walk past his Statue of Liberty to this city iconic statue outside in the unmistakable windy granite look of this area, cemented in the nostalgia of the golden era 90’s like a Pippen bronze bust once you and your pulled tight coat get inside out the cold, you know what it’s about. Post Jordan and Baby Bulls era you were the team to compete, bring it all back. And although Rose was the next 23 in line star to grow from concrete you were the dependable all-star from the start and a ten years of your own. You’ll go down as one of the best Bulls ever. Like the 1 and only Rose, your number nine will be shot up there in the rafters with all the twenty and thirty-three’s and all the banners bar injuries you could have put up there.

Two All-Star selections an All Defensive Second Team selection and the J. Walter Kennedy Citizenship Award for starters that’s why. But the Duke grad who also logged some time with the Cleveland Cavaliers and the Miami Heat (after Pat Riley called him one of the most important acquisitions after he came in for the post King era in South Beach)  was much more than a number, even if his will end up with the air up there when it is all said and done…which it is. Because after playing for the Minnesota Timberwolves last year after his Hollywood divorce, Deng is calling it a career. But he isn’t retiring Minny with the Wolves oh no. And there won’t be one last dance of a season sadly for those practicing their steps.

But still he is galloping out this association as a Bull. After signing a one-day contract with the team he entered the league with as an all rookie, seventh draft pick, Luol will retire and leave the league with the same team. It’s a grand gesture and nice move from the Bulls (even though it leaves talented player Perrion Callandret cut (bring him back)), as Deng’s 15 year career-with the lion share being with these cubs-comes full circle in Chicago like this town’s Loop subway system.

Must Read:
The Lakers Will Miss Pau Gasol

As Chicago as Common, Deng is back where he belongs if only for a night as the seasons of change and cities weather brings him back to where it all began for a fitting end blowing in the wind.