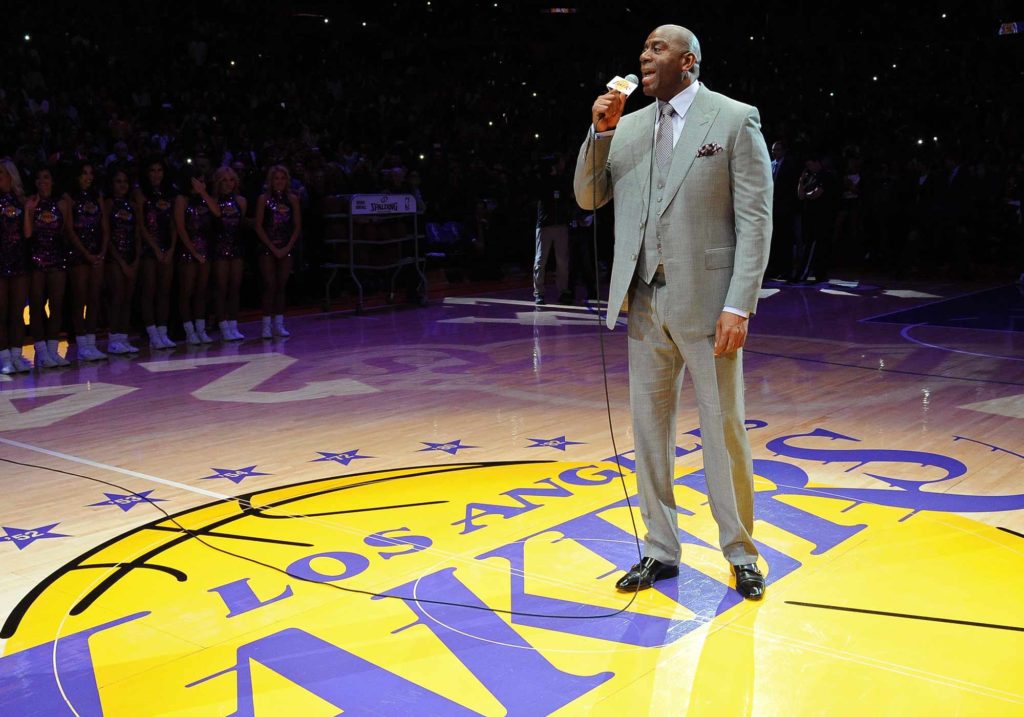 And for his next trick Magic Johnson will make the Los Angeles Lakers gold again without taking a single shot.

Just like the good old playing days of purple haze.

Earvin Johnson’s number 32 jersey resides in the rafters with the Worthy’s and Wilt’s…he’s been retired for decades now. Just like all the Shaq’s inbetween. His bronze adonis of a statue greets you at the entrance to the STAPLES Center with all the Kareem’s and Jerry’s. He’s a Laker legend for life.

But now the part owner of the Los Angeles Dodgers baseball team, who has been trying to bring a NFL franchise to the City of Angels he helped Starbucks spread its wings and latte orders in continues his status as king of L.A. by completing the sporting holy trinity and making sure his Los Angeles Laker legacy lives on. Arguably the most loveable and favourite player in the history of LAL that has lead the team from Point Guard to the head coaching position can now add another Hollywood moment to his purple and gold resume.

From Showtime to running the show, the outspoken when it comes to L.A.’s woes Magic has left his sideline gig at ESPN to be the Lakers new President Of Basketball Operations. It’s been looking like a script was about to be flipped for weeks, from meetings with Jeanie Buss to new Laker Point Guard leader D’Angelo Russell, but now it’s official. Just call him Mr. President. It’s no illusion. As Mitch Kupchak and Jim Buss were fired and the Magic man was hired. But nothing was behind the back from the most unselfish basketball player in NBA history in a league, let alone Lakers based on showmanship. Everything appears above the boards.

Although this must be a dream for Jeanie. It doesn’t come without lost sleep for the Lakers first lady and president. Letting go of her brother must have been as tough as seeing beau Phil Jackson leave his head coaching position. But it was clear for awhile that the late, great redefining owner Jerry Buss’ son wasn’t cutting the Laker gold mustard. You have to feel for Mitch though. Just like during his playing days riddled by injury the former big forward of promising power has been unlucky when it comes to missed potential. From the nixing of the Chris Paul trade to the career crippling injuries to Kobe Bryant that vetoed the final curtain of his closing court chapter. And everyone in Lakerland remembers Dwight Howard don’t they?

Apparantly the final pink slip in Mitch and Buss’ in-tray was the failure to land DeMarcus Cousins across California from the Sacramento Kings from a G.M. known in his playing days to help the Lakers find their future (just Google who Laker legend Vlade Divac was traded to Charlotte for in ’96). Although DMC would have formed a formidable U.K. BBN frontcourt with Julius Randle in L.A. he ended up forming a twin tower one with fellow Kentucky Wildcat Anthony Davis in the N.O. L.A. All because the former Buss brass and Kupchak were unwilling to let number 2 rookie Brandon Ingram go for a Boogie Wonderland in Hollywood’s new Showtime.

But from D’Angelo to Jordan. Larry Nance to Zubac and of course Julius and Ingram, Magic has made it clear as a reveal that the youngsters are the new untouchables. Despite a crazy rumor involving the Chicago Bulls disgruntled Jimmy Butler and Michael Carter-Williams for Randle, Clarkson and for some reason the Sixth Man Of The Year the Lakers keep dangling as bait, Lou Williams (BREAKING: At press time the Lakers sent the sparkiest of plugs Lou Will to Houston for a future first round Rocket pick and talented swingman option Corey Brewer). That sounds like a team gutting awful trade. On the other hand finding a deal that brings Brandon’s fellow Duke Devil Jahil Okafor on board feels more like serendipity than restaurants in New York’s Little Italy that became John Cusack movies. As it’s no secret that coming in second for the last two seasons the Lakers wanted their new big man for the 7 feet and rising Laker legacy that has stretched from George Mikan to Andrew Bynum (well…for a stunted season or two), even if they aren’t cooling on the man with ice in his veins who they ran with instead. Still it’s clear the Lakers have a glut of guards, just like the Sixers have more big stakes out in Philly then they have in cheese. Perhaps the Lakers could offer All-Star Luol Deng, a veteran back-up point like Calderon or Huertas and someone like Ivica Zubac as a package for Jahil and maybe another name (but Philly may not go for it without someone like Nance). If a deal is made for Okafor in the next two days he may be the final piece in this Russell/Randle/Clarkson/Nance Jr and Ingram jigsaw that could come together in completing the contention that Magic sees coming in the next couple of years.

But for now it seems like President Johnson is looking to bring back Bryant out of retirement (not to play, settle down) and Kobe’s agent Rob Pelinka of all people for the G.M. spot.

Major moves are happening from the M.J. before Mike just like the no looks he used to pass right before your eyes.