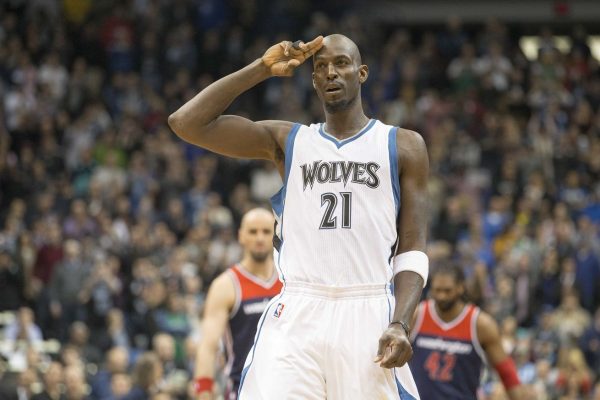 Da Kid is finally too old for all this.

The wolf howled for one last time last night as arguably the most passionate player to ever play this game, Kevin Garnett finally threw in the towel of retirement.

Millenials have lost a lot of their generations greats this year, but in five years time when they are all eligible-like New York Liberty’s Swin Cash and whoever else calls it quits this offseason-we’re going to have one hell of a Hall of Fame class for 2021.

Golden State Warriors faithful dubbing their new free agent superteam leader the best know this; before K.D. there was a K.G. And in his time he had as much heart as Iverson. As much drive as Kobe. He was intensities inspiration. Tenacity his muse. Number 21’s 21 seasons in the L began in 1995 where he was drafted by twin cities for the Timberwolves. And in this golden age he was the new prototype big-man player for the new milleniuum.

Kevin quickly became talked about as the new King in the late, great Prince’s city of Minneapolis. Forming a new era Payton and Kemp with point God Stephon Marbury, the Timberwolves looked to reach the moon.

But then Steph left and Minnesota was lost in the woods without Starbury. Garnett strapped the team on his back and his lean, mean frame however and almost took his town all the way to the promised land. Especially when guys like Sam Cassell and Latrell Sprewell were added in All-Star unison. But it seemed, alas like the Lakers were always in their way. This was the Shaq and Kobe era after all.

Must Read:
Moore To Life Than Basketball

Then K.G. joined a real big-three in the truth, Paul Pierce and the greatest shooter of all-time, Ray Allen (sorry Larry, Reggie and Steph) for the only team that really knows how to beat the Lakers in the Boston Celtics. Then that elusive, anticipated ring came round from the karma of basketballs Gods for a man who truly sweat and bled for it as a new dynasty age was born in Beantown.

But the luck of the Irish didn’t last long as K.G. and P-Double headed to the B.K. for the Brooklyn Nets. Here they got no sleep in a superteam move that didn’t quite take off like LaGuardia. As Pierce went to Washington like Obama should for another term, Garnett headed to the only place he could really call his hoops home.

The Big Ticket took a train back to Minny. Once a Timberwolf and always a Timberwolf again, Kevin Garnett showed flashes and big dunks of Da Kid as he mentored the youthful movement in Minnesota for his final year. Now after agreeing to a buyout with the T-Wolves, Kevin Garnett leaves his franchise with the future teen-wolf faces of Ricky Rubio, Andrew Wiggins, Zach LaVine and protegee Karl Anthony-Townes. This litter can really trash talk. But it doesn’t seem like two decades ago that this 20 and 10 sure thing was a pup himself.

But as he slams his forehead against the bottom of the basket one more time, for his career Da Kid was more than alright…he was just the ticket.

Kevin, we pound our hearts for you one last time!