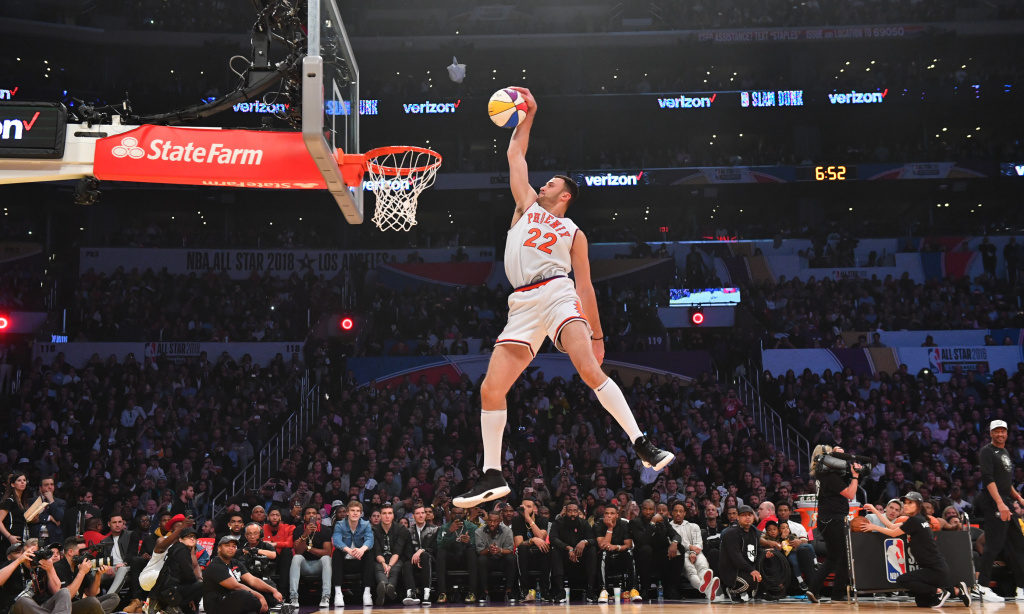 Los Angeles, it doesn’t get much more Hollywood than this. Even if Beyonce, Queen Latifah, Chris Tucker and even the other Michael (B) Jordan were taking in all the lights, camera action court-side.

After the 2017 Mardi Gras in New Orleans last year and two calendar’s after our native Toronto held the All Star Weekend in Canada, the sixth A.S.G. in the Clipper and Lakerland of the downtown STAPLES of L.A. was the first of it’s kind. As two of the best players in the association and reigning finalists decided to draft their own pool of players against the wall for the ultimate black and white pick-up game between ‘Team Stephen’ and ‘Team LeBron’, for all the marbles of which of the last two champions would be King.

Well it certainly helps if James picks his rivals reigning MVP teammate Kevin Durant and his own former partner in pine championship crime Kyrie Irving for the big shots first.

But before all that it was down to regular festivities to begin the weekend of All-Star. Basketball’s equivalent of music’s Grammy’s or movies Oscars in Superbowl February. Opening these ceremonials Team World beat down Team USA 155-124 in the Rising Stars game that should really tell you something. Despite home court advantage rookie steal, Kyle Kuzma notching 20, fellow Californian franchise face Buddy Hield was king as the Sacramento star hit 29 as the two sides wore Clipper and Laker interloped Buffalo and MPLS throwbacks for the Hollywood script. And after Quavo of hit duo Migos took home the Celebrity Game MVP as Team Clippers beat Team Lakers 79-66, Spencer Dinwiddie paid the bills in a superior skills comp. Before scorching Sun in California Devin Booker showed his career high 70 was no one-hit wonder as he burnt down all the nets and the money-ball rack. Winning the three-point contest showdown from reigning winner and sixth man Eric Gordon. Grounding the Rocket as this Phoenix rose. Book it!

But after the most therapeutic competition of All-Star weekend it was time for the most exciting one just as compelling. And in honoring his father Larry Nance, the 1984 winner of the inaugural Slam-Dunk contest, Larry Nance Jr. rocked the baby cradle, like father, like dunk. As he even rocked the old-school Phoenix Suns jersey, short shorts and high-socks for an inspired imitation. But under the magicians cloak, those Los Angeles natives in attendance draped in gold wish he had turned into someone turning back the clock and wearing a Lakers jersey (those Lonzo assists with the ball would have helped). As what would have been a long awaited, eagerly anticipated home-team representation turned into an Akron homecoming for the Ohio hometown hero like LeBron in the Kings land once the trade deadline passed.

Pops Nance loved it though after he himself played the lions share of his career in Cleveland as a Cavalier. Even assisting his boy on his second slam, before he blew the house down with a windmill that even rocked Chris Rock and then double tapped an Instagram worthy picture perfect dunk that if your phone blinked, you’d have had to instant replay it to not miss it and believe it. But all this court creativity wasn’t enough like Maverick rookie Dennis Smith Jr.’s 360 reverse, through the legs 50. Or All-Star Victor Oladipo getting an assist off King T’Challa himself Chadwick Boseman, suiting up in the Black Panther mask and clawing a tomahawk. And if you think that was special, if only you were a fly on the wall for the moment entertainment megastar Jamie Foxx told Vic he loved his album and started singing ‘A Song For You’ with him in the parking lot (as told by Sports Illustrated’s Lee Jenkins).

As Utah’s jazz man Donovan Mitchell won by jumping over Kevin Hart and his family (Come on! How hard is that? The comedian was even crouched down. Seriously?! He could have even been sat on his shoulders and Mitch would have been good), and then breaking out the classic Vince Carter Raptor jersey and doing you know what.

The whole weekend turned out to be a testament to a throwback tribute despite Nike’s brand new Team LeBron and Steph duds. Last years All-Star representative, Pelican Anthony Davis paying tribute to his injury fallen teammate brother Cousins by wearing what would have been his numero zero jersey. Free agent suitors beware, DeMarcus is going nowhere now this summer after this. You see he saw on I.G. but look at the shot. How s### was his seat for a would be player?

But after Black Eyed Pea Fergie caught flack for her soulful and sultry rendition of the Star Spangled Banner national anthem (hey, you didn’t complain when Marvin did it) the game hit all the high-flying, dunking high-notes. So much so fans needed throat lozenges like Pink! Even if there wasn’t a single Clipper or Laker representative in the game itself. Despite the lobbying for 6 Man, Lou Will and new Laker Isaiah Thomas only recently being LeBron’s actual teammate.

The King took the MVP crown himself as his 29 points, 10 rebounds and 8 assists helped turn a 15 point hole into a 148-145 victory. And from the look on his face as he leapt into Kevin Durant’s arms of all people, it looked like he just won the NBA Championship back. And from the look on Steph’s face on the receiving end reply it was hard to disagree.

You may be the champion, but I’m the best in the world those eyes said.

Well it’s up to you to decide when round 2 of the All Star draft is televised next year for all to see in M.J.’s land of the greatest.

Charlotte’s going to be good!