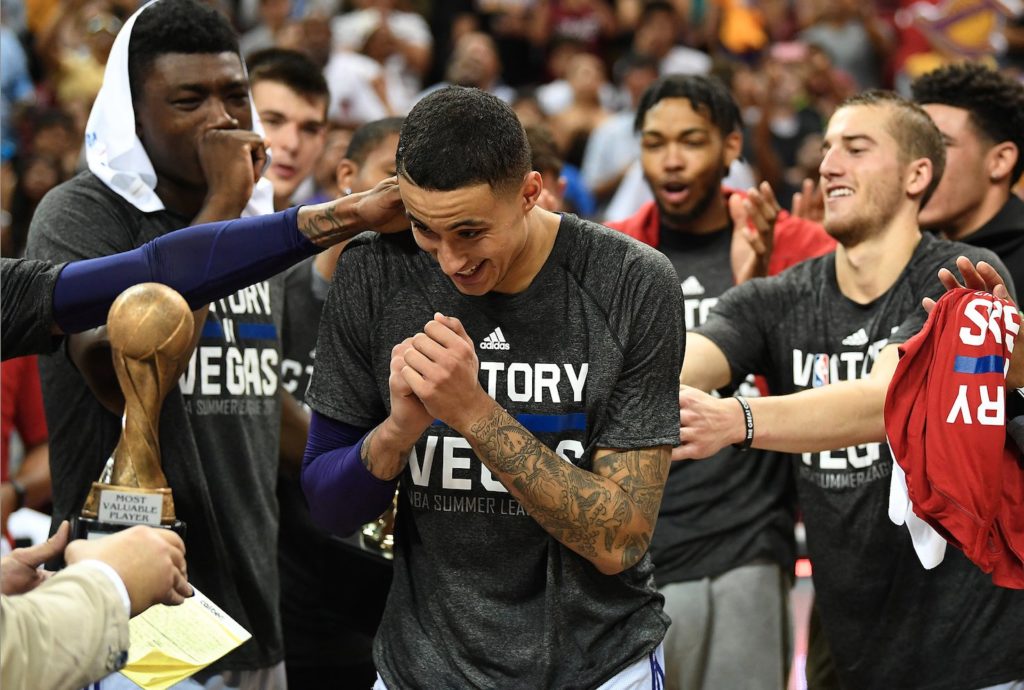 We told you it was going to be a hot summer.

And for the L.A.L. in L.V. just when you thought it was all about Ball someone else hit the big baskets last night.

The ‘Lake Zo’ of the ‘Lonzo Angeles Lakers’ were all about the 2K of the “other” rookie they drafted this Summer. As Jordan Clarkson lookalike Kyle Kuzma showed the luck of the Lakers continues in the late rounds of the draft too like Larry Nance Jr. and Ivica Zubac.

Taking the swag of Warrior departed Nick Young’s zero, this summertime hero showed it wasn’t just about the top ten like Brandon Ingram 2.

Kuzma’s dominant double/double of 30 points and 10 rebounds off an incredible 68 percentile from the field sealed a 84-79 final win for the Lake Show over the Portland Trail Blazers. As former Chicago Bull role playing days champion Jud Buechler as Summer coach showed Rose City the RIP with a Jordan-esque shrug, as the Los Angeles Lakers became the 2017 NBA Summer League Champions out in the Nevada desert of Las Vegas’ sin city.

This young core of kids are more than alright. It might take a few more spins before they are truly high rollers but at least for one light in the last one their names were in neon lights.

Victory in Vegas hit the jackpot like casion fountains as those who bet against Lonzo and his boys were coming up with pockets of lint. Ball may have started this campaign and his Lakers career a little deflated. But some monster numbers that all started with his triple double of 11 across the box score board paid change to all of that. Not to mention the best assist per game average ever in Summer League history for the Lakers first championship in this tourney. And although he sat out the last game nursing his calf like a cow he still milked this tournament for all its worth. Balling out of control and becoming the MVP of this Vegas showcase. But it was the man who he fired his quarterback perfect, laser pin-point passes to who became the actual championship MVP, Kumza.

Must Read:
La La Lakerland Played Host To A City Of All-Stars At The Weekend

Lonzo Ball and Kyle Kuzma dominating like the Kobe and D-Fish class of ’96 look to be a new rookie duo for the new ages but these Lakers have even more show stoppers. From sophomore stud Zupac to even a rookie called Bryant. Admit it, it’s all too strange to see that surname over the number 31 of Thomas right?! Even summer season call up Vander Blue-winning a trophy on his bday-deserves to permanently don the purple (like the 2 year, two-way South Beach Lakers, D-league deal struck with impressive sub Alex Caurso) as he helped the Lakers strike gold.

Concluding quite a run down the strip, come next defending year we’ll all remember what these young Lakes did last summer.