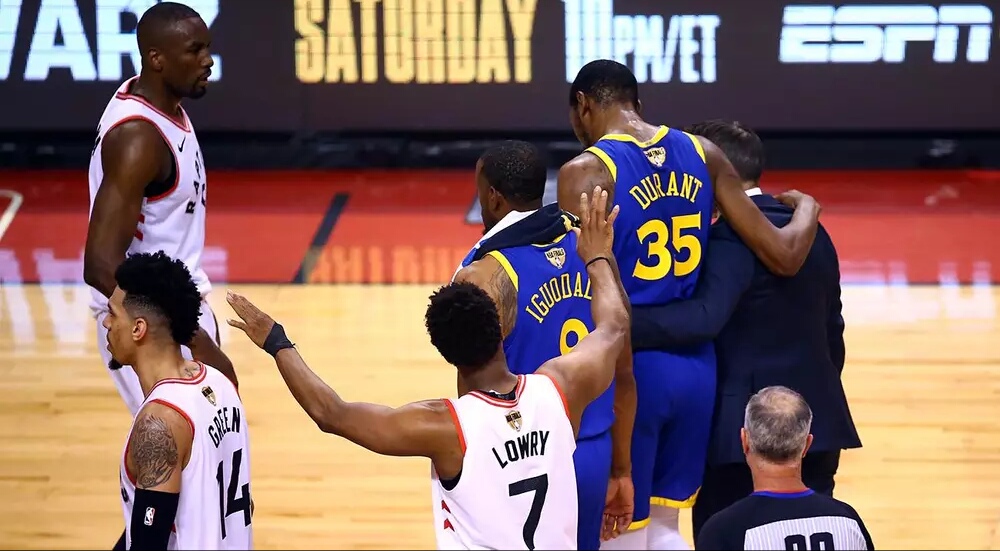 Last night Kevin Durant returned for the Golden State Warriors in the NBA Finals against the Toronto Raptors who were up 3 games to one in the series. 48 minutes away from becoming the first Canadian champions in basketball history.

Last night Kevin Durant came back from injury and played. And you know what? It absolutely ruined everything. Even the game we love with all our hardwood heart, sweat and soul.

If you cheered that is.

The Toronto Raptors where the underdogs about to extinct the notion that basketball up north meant nothing as they, behind a Drake all in good sport taunt and smile were going to give us court-side views to a death of a dynasty. Like LeBron playing David to this Golden State Goliath in 2016, before the digital San Fran age for the Warriors in Silicon Valley next season. But this time no team was going to make hoops history from 3-1 down.

The Raps where going to wrap it up on their home-stand floor and in their country with only every fan in the building singing the “Oh Canada” national anthem in a moment of beautiful unity. No Ne-Yo or Metallica metal. Just the mettle of every man and women in the six. Thousand dollar seats to nosebleeds and all the ‘Jurassic Park’ fans perimeter fence contained outside, spark plugging it all like the ultimate 6 man. Sorry October’s Very Own. Your Owl has nothing on these prehistorics.

By then the greatest offensive player in the league teamed up with the 48 points per of Steph Curry for Basketball God’s sake and last night was history. Durant hero ball pushed back and returned when he was still hurt. When he shouldn’t have. Talk that talk about him now. Scoring 11 by the second as Durant looked poised for 40 the Warriors would end up winning by one (106-105) with a chance to go back home and even up the series for a do or die Game 7 with both teams end on the line. But all that didn’t matter. As Durant went all Kobe with his own type of Mamba moment he didn’t want, injuring his Achilles in the second quarter and going down for good in the 2019 Finals and who knows what else for the free agent to be stock.

Looks like Toronto could truly take it now no matter how many games are left right?

Cause for celebration right?

This morning we’re writing a whole different type of article than we thought we would have been last night.

Call Durant what you will. A snake. A troll. The best player on this planet in the National Basketball Association. But cheering as a man goes down injured in pain is wrong. Celebrating and shouting and waving bye bye as Andre Iguodala and Steph Curry helped the same man who greeted them all in the tunnel after the previous game’s heartbreaking loss (even the walking off before the final horn King James doesn’t do that) off court is beyond poor sportsmanship, or crass cruelty. It’s the lowest of the low in this game.

Last night the NBA Finals and what is supposed to be entertainment for everyone to enjoy took a dark turn.

Shame on anyone who joined in this chorus.

They aren’t truly the North. They may not even really know what it’s like to truly be Canadian.

Yeah I said it.

And if you feel that cold like January up your spine like you shouldn’t have bully ball joined in then I’m sorry but I guess I mean you too.

You saw the perfect professional and true hero that is Kyle Lowry leading the call for the fans to stop cheering and be quiet. And if at that moment you did then it’s all good. We all make mistakes. You learned from it. And we aren’t throwing stones at those who didn’t do the same like Twitter trolls launching tirades in this meme and GIF erased age of turning someone into a swiped away afterthought the moment you wish like you’re better than them.

Even if they are the best of us. Not everyone joined in. Like Drake who displayed genuine concern for his friend tattooed on his arm and showed in good sport, despite all he’s teased and taunted — lately that this was bigger than Basketball and even the stage of what could have been Canada’s moment last night.

Must Read:
The King Takes His Hollywood Throne

And I’m sure most people in Toronto would agree now that if it did happen last night. If they did win after all the cheering and jeering to the injury, then it wouldn’t have been any sort of victory at all.

In hindsight history could have already been made this morning but after everything that changed last night, would you have really wanted it like that? This way?

Besides in the nature of real, earned champions wouldn’t you have rather beaten a full strength Durant and Warriors like you probably would have ended up doing last night if he never went down with injury to make a point.

And now if they thought Durant would have been too much to deal with and in their weakness laughing at his pain was their way of showing how scared they really were of that, then just wait until they see the sleeping Warrior they wake up now. Curry, Klay, Draymond, DeMarcus and Iggy are pissed and for the next two games at home you know who they’re going to take it out on right?

They should have never been messed with.

Just like if Toronto win the finals it will have nothing to do with Durant’s injury before or after, if the Warriors end up making a King chess move against them in 2016, circle round and win it all then it will be because of last night’s pivotal moment. But not because Kevin went down. But because of what happened after.

Be careful what you cheer for.

There’s no worse opponent than karma.

Let’s hope Kawhi has some good ones left.

Does it really all come down to this?