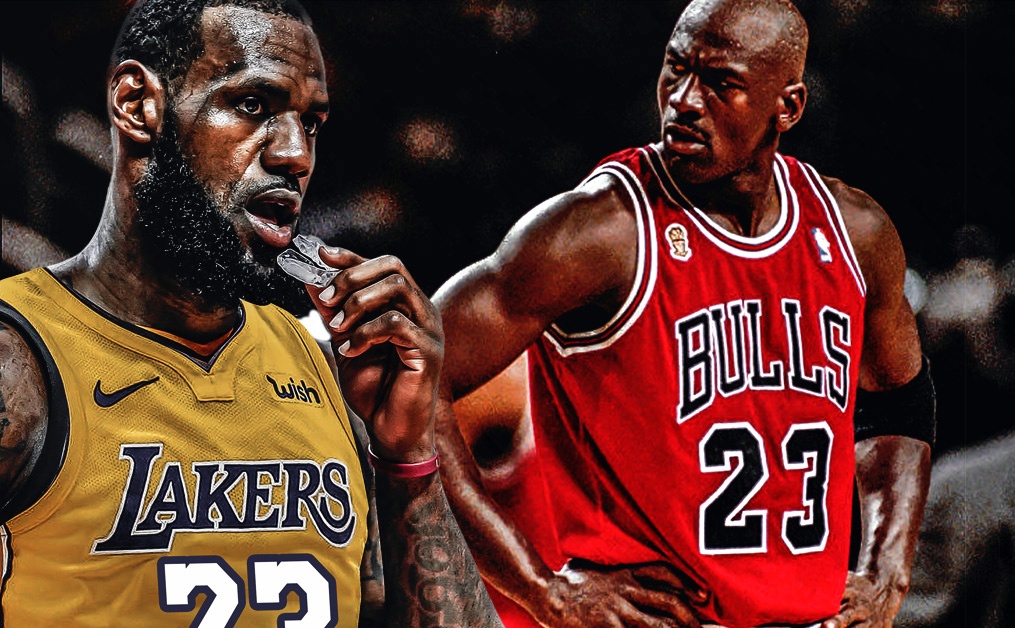 If you were LeBron James, you’d have thought it too.

If you gave Cleveland its first major sports title in 52 years and the first ever to the Cavaliers, you’d be emboldened.

And if you’d done it by leading the Cavs from a two-game deficit against one of the best teams in history, you might be tempted to say it aloud, with cameras rolling.

“That one right there made me the greatest player of all time … that’s what I felt,” said James in a now-famous episode of ESPN’s More Than An Athlete.

“The first wave of emotion was when everyone saw me crying, like, that was all for 52 years of everything in sports that’s gone on in Cleveland.

“And then after I stopped, I was like — that one right there made you the greatest player of all time.”

But if you’re LeBron James, you can’t say that.

Because you’ve got three championship rings and Michael has six.

“That demands that you have humility … I have never heard Michael Jordan say he’s the greatest of all time — even though he may think that. You just don’t come out and say that.”

Kevin McHale, a member of the great Boston Celtics teams of the 1980s an early ’90s, had similar thoughts.

“You don’t need to say that about yourself,” said McHale. “Let other people say that for you.

“It’s disrespectful to other players who came before you that were great, great players. You can’t compare eras … I didn’t like the way that sounded.”

In other words: Get off our lawn.

That’s not how we handle things here in the Unofficial NBA Legends Club.

Must Read:
One of Canada’s early hoop stars of 1940s' passes away

Jordan has yet to publicly comment on the situation, but a 2009 interview with ESPN’s Michael Wilbon has been making the rounds on social media.

Wilbon asked Jordan if he wanted to be known as the greatest player of all time. His response was careful, measured and seemingly humble.

“I don’t want it, in a sense, because I think it disrespects Wilt Chamberlain, Jerry West — you know, all the guys that, prior to me, I never had a chance to play against,” said Jordan.

“What everybody is saying I am, I never had the chance to compete against other legends that was prior to me.

“When I hear it, I cringe a little bit, because it’s a little bit embarrassing, because no one knows. I never had the chance to, once again, to play against those guys.

“I would love to have played against them, but I never did. And for you to say that I’m better than him, I mean it’s your opinion, it’s their opinion. I accept that as their opinion.

“If you ask me, I would never say that I am the greatest player. That’s because I never played against all the people that represented the league prior to Michael Jordan.”

A perfect answer from a man who rarely, if ever, said the wrong thing.

But if you watched James in that 2016 Finals series against Golden State, when he pulled the Cavs out of a 3-1 hole, you saw him on the cusp of the greatness he spoke about.

He was the undisputed Finals MVP, after putting up one of the greatest performances in Finals history.

So maybe you wouldn’t say it aloud, with cameras rolling. But you’d think it.

You’d have to, because knowing you’re great is part of what makes you great.

Must Read:
Wrapping Up The NBA Bubble Season

He was a better free-throw shooter, and was arguably a better defender. His 10 scoring titles vastly overshadow James’s one.

But James is a better rebounder, has averaged more assists and roughly the same number of blocks.

He has more All-NBA Team selections, and barring some disaster he will easily eclipse Jordan in total regular-season points, having already bested him in assists, rebounds, steals and blocks.

Jordan built the modern NBA, and James has gone a long way to guiding its next iteration.

They both personify greatness.

James said aloud what many of us were tempted to think when he brought a championship to Cleveland three seasons ago.

There’s no sense slamming him for an honest, slightly careless statement while he was among friends, perhaps not thinking about the world outside that room.

We’re not still playing by the same set of rules, either when it comes to defining greatness or in deciding who gets to acknowledge it.