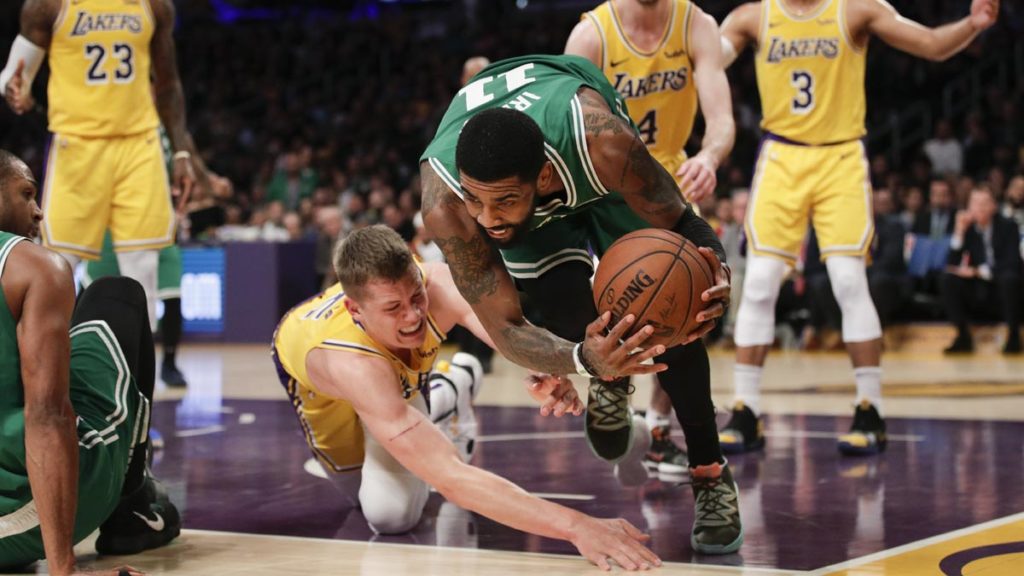 Winter has well and truly come to California this season.

And with some calling for the King’s exile in this Game of Thrones, heads have also well and truly rolled.

LeBron James is the biggest name in basketball today. But right now be faces missing his first postseason in over a decade, let alone the Finals. Despite Magic’s cast spell in the post Kobe age, this Hollywood script rewrote does not look to have the ending the King James version intended to write.

But there’s still some clock on this. This year and the following ones. This team have been the walking wounded and sitting one. From injuries to kitchen sink trade baits that have thrown everything at them and everyone under the Coach missed team bus. But there’s still hope. The gap in the bench can still be smoothed over despite the splinters.

In this game and this city of movie stars, there’s always hope. Like the desire that somehow, someway Ryan Gosling and Emma Stone’s characters in ‘La La Land’ get back together. Such is the nature of ‘Crazy, Stupid Love’. And it doesn’t get much crazier than the Lakers right now.

But hold your coat and scarves tight. Because despite the harsh March winter in sunny California as of late at least you can still feel the effects of the drafts. Like a Philadelphia process, the Lakers over the last coming half decade now have made better use of the lottery than Nicolas Cage in ‘It Could Happen To You’. And it could happen to them again this off-season with the way things are tanking at the moment (yeah we wish it was actually tanking and not just plain, actual losing). The Lakers have been so good with their selections their late round draft choices have bloomed almost as well as their top tens, if not in some cases more and better.

Let’s list them for purple heartbreak and gold celebration in order of year. Since 2015 they’ve taken Julius Randle (sniff), Jordan Clarkson (O.K. So who’s cutting onions in here?), D’Angelo Russell (straight out ballin’. And I ain’t just talking about his play right now), Larry Nance Jr. (seriously?), Brandon Ingram, Ivica Zubac (straight Matthew McConaughey in ‘Interstellar’ watching those home movies in deep space right now). And before the year of the King and these new kids that are more than alright they drafted Lonzo Ball, Kyle Kuzma, Josh Hart and Thomas Bryant (just watch a Wizards game and see that Magic pulled a rabbit out the hat with this one and then lost it to another Hogwarts) in the same freaking year.

Must Read:
Odom Is Owed More Than This

But alas only Ingram, Kuzma, Ball and Hart remain (not “only”, they’re outstanding). And the Lakers almost offered all of them and the rest of the damn team and real estate in the Hollywood Hills (sorry Jack. Hit the road and pack up. You’re in the trade too) just so the All Star love look of LeBron James and Anthony Davis could partner up for some two on two. And the Pelicans still said “I think we’ll be alright” to this footed bill. N.O.?! Seriously?! I’m just glad we didn’t lose these guys. But in a way, either or we might actually have done anyway. Leaving us much worse off.

I mean would you really give up all these kids for one guy like Anthony Davis who looks to be free to be on his way regardless? Or all the aforementioned for one King like LeBron?

Yeah I said it.

The former GIF-able, Ronny Turiaf bench presence with the look of a kids face on Christmas who somehow got to sneak onto the Lakers bench has turned into a baby faced assassin. He’s gone from sitting next to the former Shaq and Kobe era dancing king and being the Mark Madsen energy and enthusiasm guy on the pine, to showing that same new generation, Mad Dog hustle on court. Moritz, the former Michigan Wolverine college star is a slasher like Logan and can complete this young core fab four with his small ball length at center and his Brook Lopez ability to hit the open three when scaling back downtown. So why the Lakers had to give up a guy who needs us as much as we need him in the meme team completion of Michael Beasley and Ivica ‘for the love of God do you not see how big this big man was getting’ Zubac, our post Gasol international man (you see that Pop and Pau photo the Bucks posted as they stopped at the Spurs last night Lake Show? Learn from it!) to our crosstown and arena rivals the Clippers. All for some Muscala man we barely use is beyond well even the most messed up trade pitch these too Hollywood for the blue collar Boston run game have dreamed of dry erase drawing up. But I kind of digress.

Moe getting mo’ buckets isn’t just a perimeter presence, he’s an all round collegiate schooled player. Who along with big Isaac Bogna, the sprightly Johnathan Williams and Svi (who we actually decently swapped like for like for Laker lover and three ball devotee Reggie Bullock) shows the Lake Show can even draft well even in the same summer of bringing in the King and the one year vets of JaVale McGee, Rajon Rondo, Lance Stephenson and Bease’ (keep that proud head up legend). They’ve done it again. This team has bigger balls than an unflinching Kobe when before they were teammates Matt Barnes tried to inbound the ball into his face.

You saw the flagrant disrespect and foul by Draymond Green on a hard fought lay-up that Moe completed, shouting with anger and the and one you can’t stop me defiance. Kid just wants to play and show his worth with the big boys. And boy is he. Now that Brandon Ingram and probably Lonzo Ball are shut down for the season (please don’t let this be the last time they ever wear purple and gold), Kyle Kuzma is out injured too (seriously the look of the Lakers this year. Give some leeway). And in the latest storied Celtics clash the Lakers dropped 120-107, more people were interested in trying to see what LeBron was saying to former Cavalier teammate and free agent to be Kyrie postgame as he pulled that ‘Casino’ behind the jersey cheap talk trick again. But I’m more interested in Moe Wagner said to Coach Walton when Luke told him he was starting in place of Kuz, calling him up like a South Bay Caruso or G-League Ingram for his moment and asked Moe if he was ready.

Wagner who has been wagging his tail on the bench all season is a dog and said nothing. He just went out and Chris Pratt in ‘Moneyball’ went out and swung big and struck (and we all know what happened to that Guardian when we went out the Galaxy). A career high 22 points to go along with 8 rebounds in his first start? That’s practically a 20 and 10.