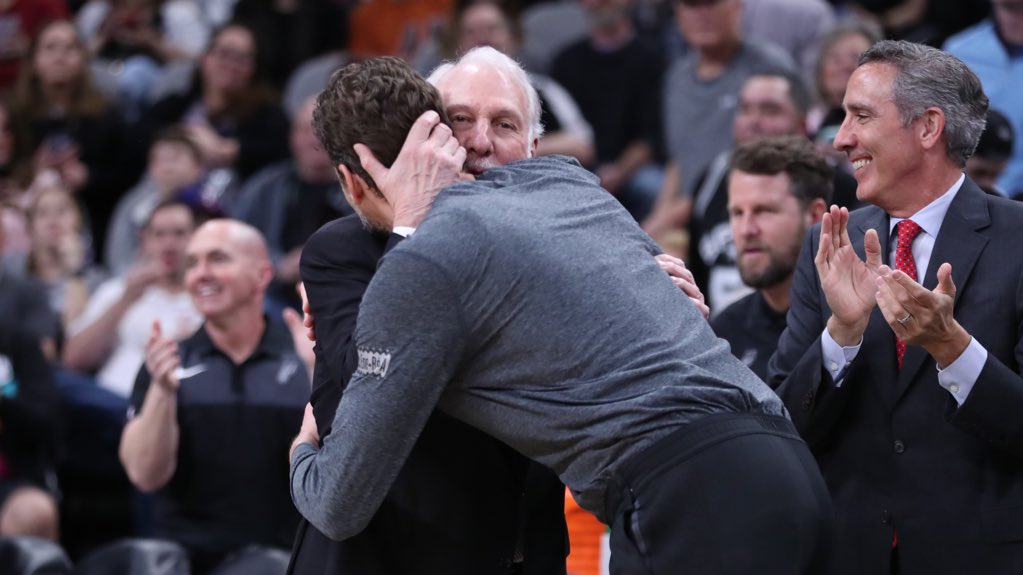 See this picture above Lake Show? The picture of Pau embracing Pop like he was Kobe…or better yet his own pop?

New Buck Pau Gasol may have only registered 15 minutes of on court fame in a road game against his old hand the San Antonio Spurs last night. Recording the equivalent of a three pointer or bucket and one, whichever way you want to call it. And his Milwaukee Bucks team, sitting as pretty as the game of All-Star Giannis Antetokounmpo uptop the Eastern Conference may have left Texas with the L. But the reception the Spanish legend got back in the Spurs saloon was that of a heroes homecoming.

Emotional embraces with his former band of brothers dressed in their military tribute fatigues. Jumbotron tributes of his entire, illustrious career. Standing ovations to not an unclapped hand in the house. You would have thought it was his last year in the association and not Nowitzki’s. Although the third best European player of all time behind big Dirk and the legend of what could have been the best player ever (word to M.J. G.O.A.T.) in the late, great Drazen Petrovic (Rest Peacefully King), until Luka Doncic or his Porzingis Mavericks teammate has something to say about it has still got plenty left in the Gasoline tank. After his former Spanish Bull teammate in Chicago Nikola Mirotic after his deadline deal told a bought out free agent in Pau to come to Wisconsin because and I quote, “you’ll love it here”.

And I’m sure he does riding the Harley Davidson’s with the bench he bolsters behind the best, not to mention the most versatile superstar in the league in the Greek Freak alphabet turning opponents into yogurt. A more complete team that could even splash the super one of the reigning dynasty Golden State Warrior kings. The G-League to All Star Khris Middleton and the somehow slept on ‘Bron built point superstar of Eric Bledsoe who has bled teams of late. Not to mention this writers Lakers.

And that’s the point. When it’s all said and done Pau Gasol will go down as one of the greatest players of all-time. Regardless of continent or stature. His time at the big-three in Chicago, San Antonio and now Milwaukee will go down as more than just a former All Star heading out to pasture, but a big time veteran contributor whose more than just a big name or locker room presence in this game. But when it comes to who will retire his jersey like his national team who from European Championship dominance to Olympic Gold will see the big Gasol brother as their unanimous greatest of all-time (here’s hoping for one last dance in Tokyo this coming 2020), we know who should even though we don’t know who would…yet.

Must Read:
United. The NBA Takes A Knee In Solidarity

The Vancouver ‘Rookie Of The Year’ to Memphis Grizzlies for sure will raise it up for their greatest Grizz after his younger pup Marc. But what of the Lakers? They dangled this guy disrespectfully as trade bait many moons before everyone was up in arms about Lonzo, Kuzma, Brandon Ingram, Josh Hart and the rest of the team without a crown being offered up on a polished plate for the crawfish of New Orleans to give them a French Quarter in return in big-man Anthony Davis. And they did it again and again, an immeasurable amount of times before enough was enough and Pau signed on the dotted line for the Windy City. That’s why former Memphis man Marc is up north in Toronto now and not with the team that actually drafted him and traded his selection along with other pieces for Pau. He refused to sign for these Lakers before re-upping in Tennessee like Timberlake because of how they treated his brother. Karma’s a bitch Hollywood and just because you live in the Tinseltown hills doesn’t mean you avoid seeing it up there on your high horse. And did they learn from it with their post Gasol international talent in now Clipper rival (?) Center Ivica Zubac? The opposite of Dre for this Zupac, “hell naw”! Even Snoop may be selling his seat. And apparently the news just in word is that the Lakers staff pleaded for Magic to resign Julius Randle and Brook Lopez, before he opted for one year deals for McGee, Lance Stephenson and Michael Beasley. What?! Is this a meme?! I’m shouting like John McEnroe as I write this.

And if it wasn’t for the brotherhood Gasol had with Kobe I’m sure this professional would have a lot more to say than the held high grace he keeps. Playing well is the best revenge. Although real purple and gold bleeders know that this champions number 16 (no way Kobe wins those other two rings without his in sync brother) belongs up there with all the towering greats in this seven foot plus legacy of Laker bigs. Wilt, Shaq, Kareem, Big Game, Mikan, what could have been with Bynum or Howard, Pau Gasol belongs there with every one of them as not only one of the greatest Lakers, but one of the greatest seven footers this game has ever seen. And like his European brother Dirk, with the added extra of having even more skill and range in this post paint age than all of these other greats of the game.

Must Read:
Love Lost For 6 Weeks On Valentine's Day

To finish this point let’s go back to the picture above that starts this whole article off. Is there a greater coach in history and longevity than Greg Popovich (aside form maybe Phil)? Look at his face. Really take in how they hold each other close. Real recognises real and the way Pau Gasol was honoured last night is looking familiar in this year of one last dances and a few more go rounds for those fine wine vets, pushing 40 and their legacies even further with each step they take on court.

And we’d bet our bottom dollar on this Buck until the day he stops lacing them up.

Let’s hear it for the new deer.