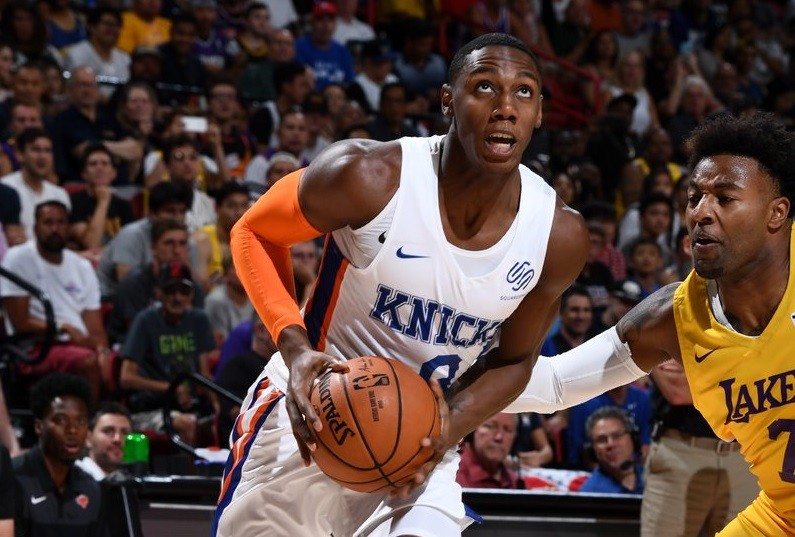 Magnitudes off the Richter. An earthquake hit Sin City like jackpot in the NBA’s Summer League in Las Vegas, Nevada out in the desert last week.

And as the Jumbo-tron still shook like the music it was pumping, many people in awe inspired attendance would have been forgiven for thinking it was Zion. As the Duke standout and the first pick in the 2019 NBA Draft Williamson made us feel more tremors than Kevin Bacon. As the new New Orleans Pelican burst out the hardwood and flew, man-handling a steal off an opponent who’s just a poster now’s inbounds pass and put back a viscous, signature slam that felt like they still tested atomic bombs out in the Nevada desert overlooking the electric, neon skyline. All whilst new and former teammates respectively, Lonzo Ball, Josh Hart and Anthony Davis looked on with “here comes the big airplane” mouths.

But after the road to Mount Zion’s knee injury lead to more Patrick Ewing ice than up there in Japan’s Mount Fuji, it was better the Blue Devil you know. As the Knicks third pick RJ Barrett ended up moving the needle more over this scorching, seasonal tourney of the youthful future of this association. Looking as good as those beautiful blue Knicks Summer League jerseys that are so clean we want to see them fresh off the press in the the NBA Store in NYC. So much so that even if RJ handed you one of his autographed signatures post game you’d still be like, “you got this in a medium?”

Sounding better than all those thirsty announcers singing “Summer Leeeeague” like The Isley Brothers this time of year classic, ‘Summer Breeze’. Making everything feel fine as he blew through defenders like the Jasmine in my mind. RJ initialed his dynamic debut and mainstream moment. Making Knicks’ fans almost forget that they just lost out on their number one goal, Zion Williamson. Or their free agent duo desire of Kevin Durant and Kyrie Irving, who ended up on the other side of New York, across that bridge from Manhattan in Brooklyn with the Nets…almost. Following the sweated out, hard nosed 90’s were only Jordan and Starks shots got in the way of golden era glory, the Knicks’ now have their first real leader in the post Porzingis era since Syracuse star ‘Melo for the Orangemen.

And he’s not alone. Barrett who was choosing Knicks’ mannequin heads to bucket on New York’s Late Night show with Jimmy Fallon nights before the draft cap has plenty to pass to in a Pelican rivaling young core of young guns, Kevin Knox and Allonzo Trier, new free agent signing Julius Randle (this Pel is still a big ‘cat out of Kentucky like Anthony Davis or DeMarcus Cousins reunited on the Lake Show like purple and gold fans hoped he would be too), Elfrid Payton and of course the soaring Dennis Smith Jr. Not to mention a bolstered bench of Taj Gibson and Reggie Bullock from more than midtown. Call it Chelsea, the Tribeca or even Battery Park after the High-Line of the Meatpacking District. The future of this franchise to the naked eye of ignorance is about to look better than the view from that new Vessel structure in Hudson Yards.

Barrett began in Vegas with some early snake eyes trouble. But rolling the dice again he turned into a killer like Brandon Flowers. The man. Come round. Nothing can break. Nothing can break him down. First he scorched California’s new look King sized Lakers for 21 points, 10 rebounds and three assists. But it was his spell in his last Summer forecast against the Wizards were RJ showed Washington that just like NYC, DC may be America’s capital, but there’s nothing like New York, New York. He was so good you had to check the instant replay twice, with another 21 and 10, two perfect precision passes off cashing in a triple-double chip like he was a team that had both James Harden and Russell Westbrook on their roster roll call. Houston, do you read me?

Averages of 15.4 points, 8.6 rebounds and 4.2 assists in a televised tournament that is basically a glorified practice scrimmage (tell me, do you even know who won the thing?) show he will be above so. The Canadian Maple Mamba has that syrup for your bacon. Even without free agent big names like Kevin and Kyrie who are one more decision away from being journeymen, forget super-teams, the Knicks may have a lifer in RJ from Coach K’s Duke fraternity administration in the association now. Can you relate? Barrett could be brilliant and New York no longer a rotten apple. But a couple of big names away from having their title again in the Mecca of Madison Square Garden’s, World’s Most Famous Arena in bright Times Square lights.

It’s almost a New Year for New York, time for the ball to drop.