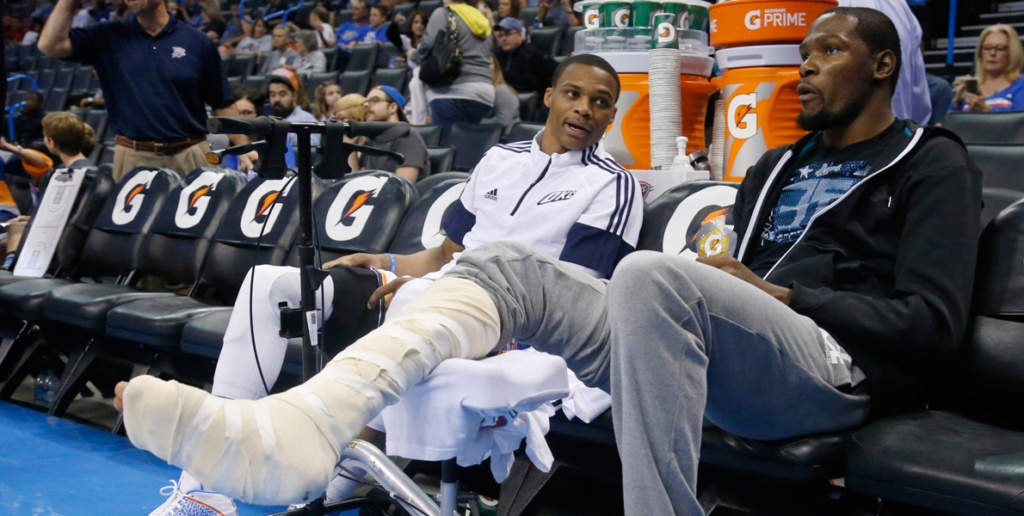 I guess for the Thunder, when it rains it really does pour.

Oklahoma City have weathered a lot of storms in this turbulent season. Many of their top flight players have been grounded with injury, missing games and thus potential playoff frames. As a matter of fact, with everyone from Kobe Bryant to Derrick Rose swapping the sweats for the suits, it seems like every team in the league has taken and L when it comes to DNP’s. But more than a coaches decision, it seems like the ones of the fickle fingers of fate of the basketball God’s.

After missing more time than employees who sleep through the snooze button, Kevin Durant has now officially punched out for the season. But it has been by a forced hand…or should we say foot!? As Kevin’s right kicker requires graft surgery that won’t see him resume “basketball activities” for at least another 4-6 calender months.

So what does this mean for the Thunder and the rest of the league as a whole? It was all good just a year ago! Durant had one upped LeBron James as league MVP and his OKC side looked favourite to take home even bigger trophies. But then those old dog and bones the San Antonio Spurs showed them and the King where the real throne belonged.

Now without KD both LBJ and the S.A.S. have a better chance of fighting for victory again. As do the Chef Curry with the hot pot Golden State Warriors or the Harden Rockets (speaking of Thunder strikes shining in Durant’s absence)…or any outsider for that matter. Like the still in the stampede Chicago Bulls, who will see even more red and maybe gold if heartbreaking Derrick Rose really does return and bloom before the playoffs.

That is unless Russ has something to say about it.

Must Read:
The Rockets Are Far From Washed

If the video game cover cursed Durant (who has been a mainstay for this franchise ever since they where slung from Seattle like some Pikes Place Market cod) had stayed healthy for the course, we’d surely be talking about who was Most Valuable again and maybe finally the champion they deserve.

Despite the cruelty of injury that can rob even the most competitive of their time in the sun (we see you Californian Kobe). With that being said, between K’s burn and bench and battling through his own, potential season ending injury, Russell Westbrook has shown the city of Thunder and the league of association that he is no Robin sidekick to Durant’s Batman. More like a War Machine next to what was the Iron Man of number 35. Now ready to suit up with vengeance now his teammate is down. Desperate times call for stark measures.

Between the baby face of Curry and the beard of Harden-not to mention the four time King and what could have been with KD-Westbrook deserves to be MVP. He’s not just picked up the slack from a missing teammate, he’s also carrying the weight of his own injury time.

Refusing to go down again after a facial fracture and strapping on the phantom mask like Rip Hamilton and going all Kobe and LeBron opera menace, destroying the league in a symphony of no sympathy and his signature strong arm dunks, only this time with more epic engravings.

His all round play has looked video game like in its graphic content. Movie making with more cannon fodder victims, taking names like John Wick. His numbers going to Pythagoras lengths. What’s the theory? Running the floor battle to battle, longer than the Bayeux tapestry. Weaving between the defenders and keeping his team embroiled in this playoff race, despite the stitches.

He deserves Maurice enough for this, but maybe a Finals one would be in order if this unstoppable juggernaut could take his team all the way. It would be quite the trilogy and league story for this years most valuable All-Star. Either way, injury or not, OKC or not, Russell WestBrook has confirmed himself as one of the runaway, best superstars this league has offered in recent decades. You don’t need an Allen Iverson co-sign to answer that.

Unquestionably without Kevin, the Thunder are still forecasted for the next few months, but boy oh boy if only they had him too, next to their dynamite dynamo for the most devastating dynamic duo.

Then you’d be guaranteed to see reign.