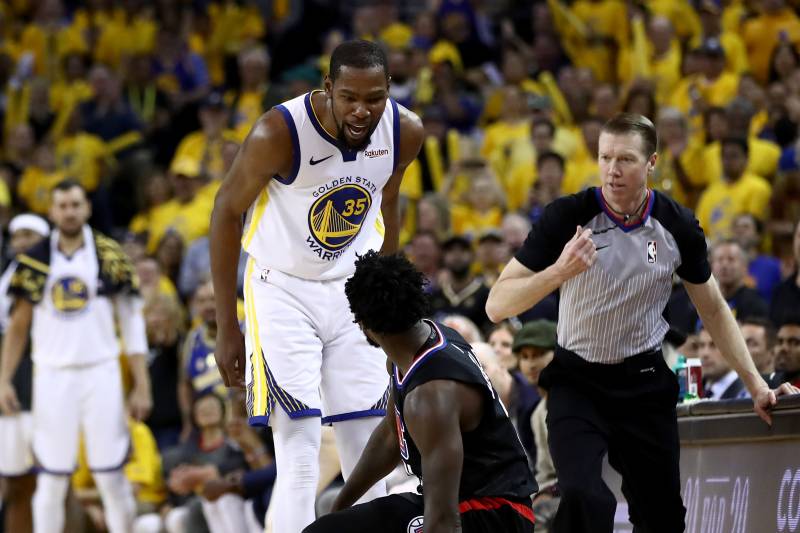 Patrick Beverley Doesnt Give A F

If life really is measured on f###s. L.A. guard of the Clippers kennel, Patrick Beverley has none left to give.

Frankly my dear, in Hollywood this guy doesn’t give a damn.

Patrick Beverley doesn’t care about the Houston Rockets, James Harden, Russell Westbrook, or the Oklahoma City Thunder like Kevin Durant. And he doesn’t care about him or Steph Curry, Klay Thompson, Draymond Green, DeMarcus Cousins or any Splash Brother Warriors from Oakland to San Francisco. You can talk about how Kevin Durant cares about him though. Look at that look of love for the game he’s bringing on his face in the midst of all that trash talking respect disguised as hate. I haven’t seen Kevin this happy in years. For all that emotion K.D. has received ever since he switched shores to the Bay, this is the only time he’s loved this type of hate. Because it’s not that. It’s just the passion of competition. And there’s nothing “just” about that, although all is fair in love and basketball war. Because like the late, great Charlie Murphy once said about Prince serving pancakes and behind the backs on ‘Chappelle’s Show’ epic real Hollywood stories, “this cat can ball man”.

I guarantee Patrick Beverley doesn’t care if you do. Like he doesn’t even care that Durant dominates this photo that speaks a thousand words or more for this article like we were shamelessly trying to bait more clicks. When really we’re trying to show how David looks in the face of Goliath from his vantage point. Not to mention the joy laced with “oh s### this guy’s really got me” look on the face of one of the greatest in the game about to get ejected too for going toe to toe with a super sub. But never underesimate the power of a microwave player like leaving your reheated Subway sandwich in the nuke cooker for too long. No matter how much you blow on it or fan it with you skittish hands, it’ll never quite feel like it’s going to cool off from its magma serving like a deep burn (we’re talking more ‘Big Bang’ Sheldon Cooper Aloe Vera here, more than ‘Anchorman’ Ron Burgundy’s thousand bicep curls that probably started at around nine hundred and ninety nine). Hello Lou Will, 6 Man of all-time, popping nachos after he did the Warriors celebration balloon like fallen Forum ones in Celtics cursed storied Lakerland. He doesn’t care about tacos, this cheese is for all the salsa. Pat Bev doesn’t even care that this Laker fan wishes he would have worn purple and gold like others he still wishes would (miss Zu). Like he probably doesn’t care for this shortened version of his name.

Patrick Beverley won’t even care about this article but we do.

He doesn’t care that the Durant dynasty as hot as Curry from downtown Oak Town are champions for years running more than faucets that leak as much as the splash in the Golden Gate of Golden State’s Pacific. To be specific he doesn’t even care if his team is down 31. Because another 30 points from sweet Lou will turn this game around and into the makings of a all guts to their own glory road, ESPN 30 for 30 documentary as the Clippers clip all that like short back and sides. Just like the place you parlour pool your postgame analysis in the next day as you’re former haircut gets dustpan swept up like many people thought these L.A. kings of the underground would be on their way by now like “we close in half an hour”. But now they stand as underdogs of the year in an end of season award category that should be invented with this guy being it’s de facto MVP for his team. Most Improved? Nah? Patrick Beverley doesn’t care about that.

What he does care about is his job, his role and his team. And he doesn’t care if he has to get ejected like the passenger seat in James Bond’s old Sean Connery era Aston Martin to do it. He doesn’t care if you’ve just been jettisoned from 007’s car. He doesn’t care if you’re shaken or stirred. You should have worn a seatbelt. He cares about buckling up and down. Guarding the opposing teams best player. Even if it is one of the best in the world right now. And he doesn’t care about switching to the other best player in the world on the same damn team if the occasion calls for it. He doesn’t care about that. He just cares about rising to the occasion. Answering the call. He doesn’t care if Philly are on their phones. He cares about what’s at stake. He cares about making them sweat for every shot, swat or not. He cares that tonight’s he’s going to give his all come tip. Because here’s a tip for you, what Patrick Beverley DOES care about is the game. Like the one Allen Iverson goes out there and dies for. Forget practice. Stepping over Kevin freaking Durant like Ty Lue. Like he 1 through 15 cares about his band of brothers. Like family. Like what he’d give everything for. Sweat after shot. Cheap or invested. Never throwing in the towel, or even taking a Gatorade break. Unlike Young Jeezy he doesn’t even care about how much Gatorade makes. And who even cares about Lob City these days after they threw it all away? Chris Paul, Blake Griffin and even saving  Jordan before DeAndre ended up at the Garden like M.J. at his best? That’s all history Doc. He cares about Rivers that run deep. Not the air up there in LAX like the Hollywood Hills, but the grounding reality of what this game is all about. Spalding to hardwood.

Patrick Beverley doesn’t care about 10 points and 5 assists. His line or a career high. All he cares about tonight is that the box score of stats reads a W for the team he gives his blood, sweat and opponents tears for. So here’s for him, whether he cares for it or not. Like being the only player that reminds us of those golden era mined tough 90’s years. Or much like those Oakley and Mase (Rest Peacefully money) Knicks, in stark contrast the grit and grind Grizzlies that this gnarly son of an expletive-we can’t mention like the no f words given again and again in this article-would be perfect for alongside fellow defensive dog back in the day Tony Allen. He doesn’t care that there’s no one like him in a league who needs more players exactly like this. Because believe me you know who does care?

Every other player in this league who has to face him. Because face it. Like him or not he’s the realest thing to happen to this game since hand checking. So you really do have to hand it to him.

But if you don’t? Guess what we don’t give?