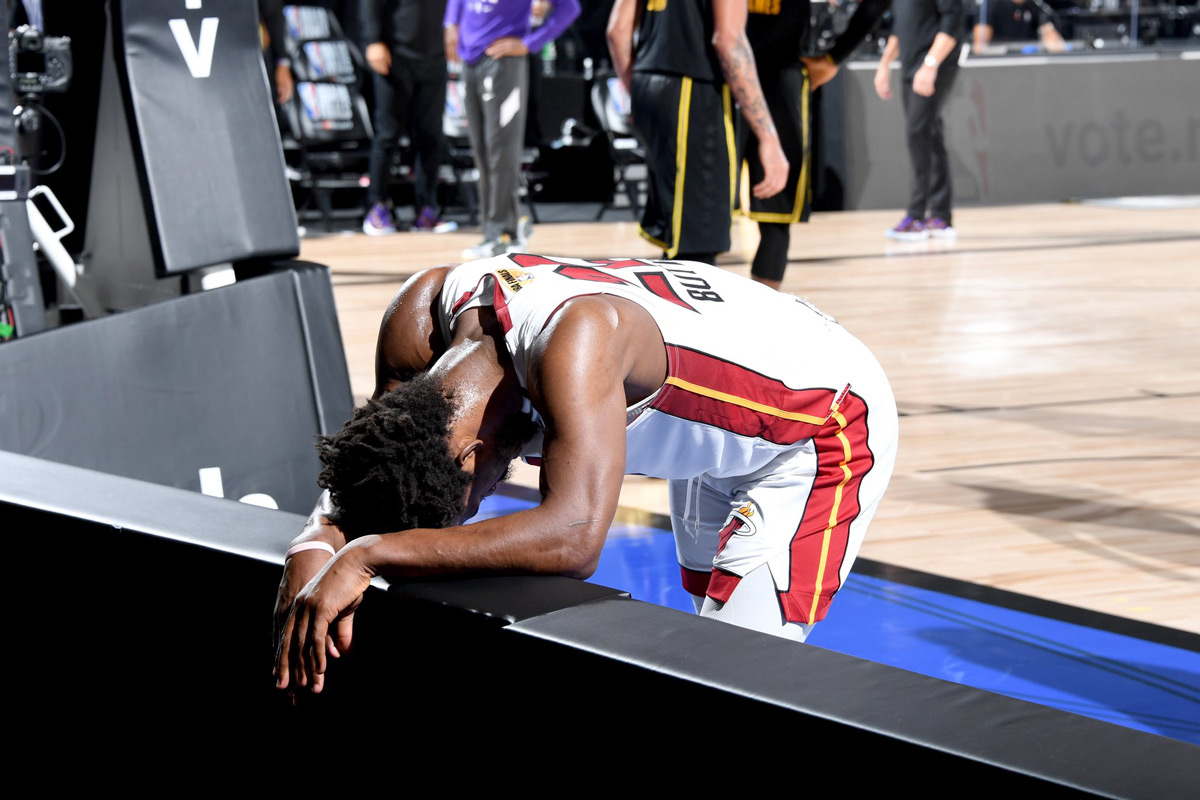 When will the Lakers learn?

Purple and gold balloons fell on an empty Forum floor when they thought they had it in the bag. The Jerry West Lakers thought they had their storied Boston Celtics rivals beat. Yet, all that helium and enthusiasm staying up there was all Bill Russell and Co needed like petty MJ inspiration. In the end for the Lake Show it was close, but a Red Auerbach cigar.

It’s not always a Hollywood ending.

Confetti canons still fully loaded had to be disarmed and wheeled away from the Bubble last night as Larry O’Brien only made an appearance to say a quick hello before he bounced like the Spalding.

Even this writer getting his championship piece title ready should have known headlines can always be rewritten. The Heat don’t care about the Lakers history. Neither does Twitter. We should have learnt from the number of times Premier League trophies get engraved with the first few letters of a teams name in a final, only for the opposition to score two last minute goals.

The Lakers looking for another Hollywood night in snakeskin were feeling themselves too. Wearing their previously playoff unbeatable Mamba jerseys.

They should have known not to tempt fate.

They should have known that would have started a fire for the white hot Heat, already “united in black”.

They should have really reiterated what Kobe said, because the “jobs not done”.

Not by a long shot. Or a Danny Green one from downtown before a Markieff Morris (who has been magnificent in these finals. They wouldn’t have got this far without him) mistake led to the Lakers nation of fans reacting like LeBron James in Cleveland to J.R. Smith’s finals gaff.

Still, Swish was on the bench. He would have made that ‘ish.

The Glove, Gary Payton who tried to deliver the mail for Shaq and Kobe with Karl Malone back in the fantastic four days of 2004 knows what it’s like to lose in the Finals. He also knows what it’s like to take his talents to South Beach like LeBron and win. He knows ‘What This Heat Thing Is All About’ as the O.G.’s latest Players Tribune piece pregame said you can’t count Miami out. Even down 3-1 like the shades of James.

Number 22 for the Heat also became the first player in history to notch 30 points, 10 rebounds, 10 assists and 5 steals or more in the Finals since Payton. Let alone the only other player to record multiple 30 point triple doubles. The other one? LeBron James.

Forget Playoff P in Los Angeles. The Lakers had Playoff Rondo back in the Bubble showing us why he’s already a champion and the purest of points running today. Still he’s got nothing on Finals Jimmy. Butler doing it again turned the Heat back on and now we have a series like the new season of Star Wars’ ‘The Mandalorian’ coming this October.

35 points, 12 rebounds, 11 assists. A triple-decker sandwich for the Lakers who thought they were about to join the ring club. But Disney World really is a circus now. To think this is the lowest rated Finals in years. Those in quarantine should be locking it down right now.

Just as the Lakers thought they were bursting the Bubble and closing the door, Butler jimmied the locks. Resting for only 48 seconds, Jimmy played all 48 minutes bar change as he and LeBron (let’s not discount his Goliath 40, 13 and 7) went “haymaker for haymaker” like Ali and Frazier as the commentator called it. Hit after hit, as Butler slumped on the court-side table looked like a spent prize fighter holding on to the ropes in one of the most iconic images of the year.

One that should be framed champion…because chip or not, Jim is one.

“It’s crawling to the finish line if you have to. It’s leaving NOTHING in the tank,” (Gary Payton for The Players Tribune).

Now look at how Jimmy left the bubbled press conference on hobbled legs.

Bringing out the finger guns and showing his hands were weapons the way he shot the rock.

I hope Mark Wahlberg hasn’t finished that movie he’s making about Jimmy Butler, because THIS is Hollywood.

It wasn’t just him in this terrific team of Herro’s and Bam Bam frontcourt paint punishers. All provided that punch. Still when it came to big shots for this big-three, it was the bench that mobbed the Lakers. Kendrick Nunn numbed the Lake Show with 14. Whilst Duncan Robinson put an end to Showtime from downtown with his 26 points, bigger than the twin towers of his last namesakes in San Antonio (Tim and David) that used to give Shaq and Kobe fits.

Then it wasn’t Danny Green’s day, week, month, or even his year my friends, as after a big bucket everyone will now sadly forget, LeBron made the right point play finding the former champion for Canada’s Toronto Raptors more open than relationships these days. Still Green only grazed the front of the rim like a kids knee as the Lakers threw away their chances with that and Morris’ hustled shot or pass. Whatever it was…we have no idea.

LeBron said of the last play however, “I wish he could have it again. I wish I could make a better pass. You just live with it.” Now that’s courtesy, professionalism and respect. Taking one for the team and not throwing his teammate under the social media running bus.

111-108, 3-2 and what could happen on any given Sunday the day after tomorrow with AD (28 in this one despite the locker room time) nursing an injury and maybe Dragic coming back (the Heat can hope. They’ve been doing that all series).

Looking to swing either way for the real momentum game in the next contest, someone is going to be taken to church this weekend.