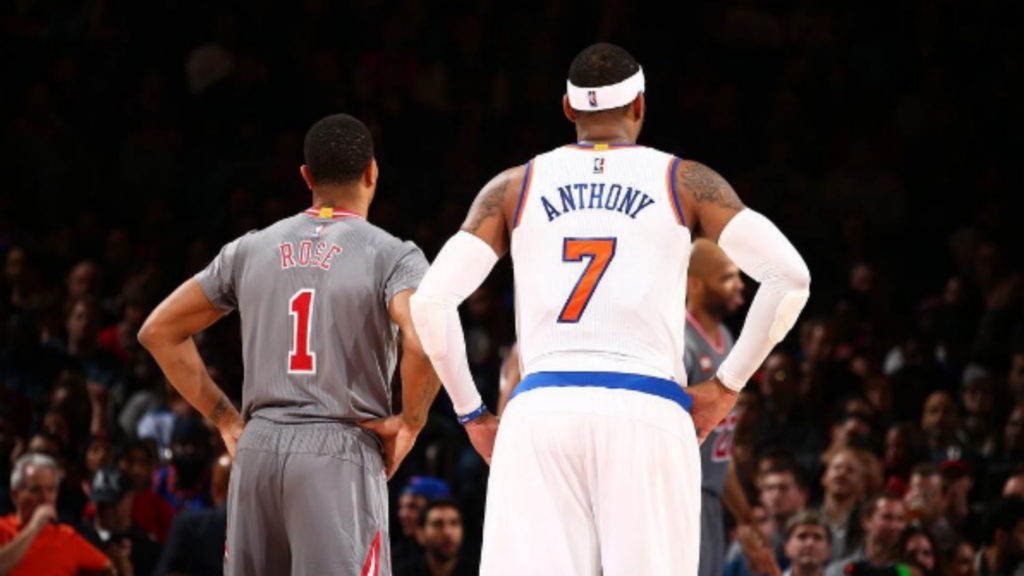 Blowing in the wind, Derrick Rose’s time with the Chicago Bulls has come to an end.

The former top draft pick and league MVP has suffered more career ending injuries than a backcourt of Grant Hill and Penny Hardaway, but now he joins the oft insulted New York Knicks dynamic duo of All-Star, N.Y.C. through and through Carmelo Anthony and last years big rookie Kristaps Porzingis to hopefully form a big-three.

Rose seemed Chicago to the wind, but the former Bulls charge leader has more in common with the apple of New York basketballs court vision. Big…but a little rotten on the inside. ‘Melo may lead these Knickerbockers and big kid Porzingis may be the future of this league, let alone franchise but all is not calm in Madison Square Garden. If Zen Master Phil Jackson can’t bring harmony to all this lack of hardwood peace than former Laker and coach Kurt Rambis won’t be the only one following Derek Fisher out the revolving door.

Still this new holy trinity does speak to the basketball God’s. Even if New York’s acquisition of the concrete grounded Rose has shades of their big move for Amar’e Stoudemire. The former dunking dynamite whose fuse was doused by career crippling injury that he should have never came back from, but in even in valiantly doing so was never the same. It’s the same for D-Rose who one time took over the Deron Williams and Chris Paul debate as best point in the league. But now apart from the King it’s new repeat MVP Steph Curry’s league now in his small ball revolution of the big three.

Still if Derrick can set the table for leading scorer Anthony and sophomore sensation Porzingis on the inside than New York’s fine dining will be known for more than just street sidewalk Hot Dog vendors and pizza places on the corner. On the menu these three courses look like the real dish, but if it all leaves a bitter taste in the New York fans mouths than they, we and you will all here about it. You know how M.S.G. fans are.

Rose is a big name in bloom however and it’s definitly worth the price of admission to the Worlds Most Famous Arena. These times in the square could be electric with this new neon. Still it’s not all gloomy on the windy side of the street. Chi-town many have lost their favourite adopted son since Jordan to New York but they got three big pieces in exchange for him and a Holliday.

Speedy European Jose Calderon is more than capable of running point and Robin Lopez bolsters their big front-court, although taking away the New York, twin sibling rivalry, fight for N.Y. with Brooklyn’s Brook. The real potential lies with last years rookie Jerian Grant. He may have flew under Kristaps radar but Harvey’s son comes from a big front court background and now reunites the family in Bulls great Horace Grant’s former paint stomping ground. This move could be crucial, especially if the rumors of Joakim Noah shipping out to join his former partner in dynamic duo crime across the Hudson are true.

Still all of this now is to service Butler. The former NBA’s Most Improved Player who is now a certified All-Star. Jimmy took to Instagram to thank his “brother” and mentor even though when it comes to this trade many will be left thinking ‘the Butler did it”. Either way Rose belongs in the jungle that’s home to the Rucker now.

But is this where dreams are made of?