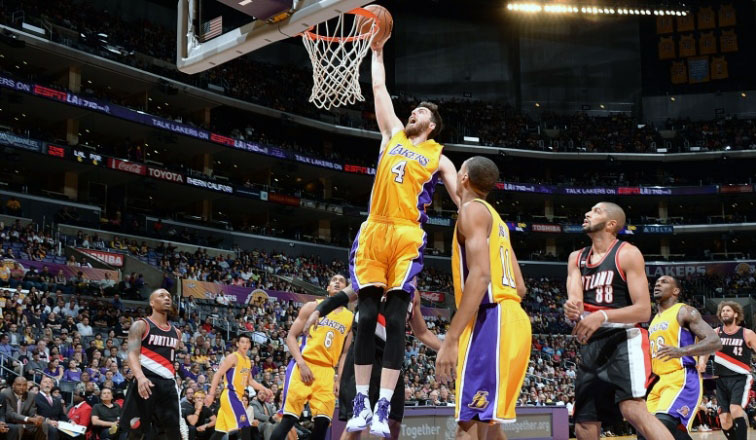 Spreading his wings and flying away, the Lakers R. Kelly went all Jordan in the air as he touched the sky with an out of this world Space Jam last night.

Seeing it and then in turn being it, Ryan Kelly stepped in the paint and the name of a win as he clutched the winning shot for his Lakers against the Portland Trail Blazers by stuffing it right through the hoop.

And they thought he couldn’t get up like that!

As he soared and scored the Lakers shut the open door, blazing Portland to a trail of 104-102 as Kelly took the Lake Show from the verge of breaking down with 2 point nothing seconds left on the clock.

The big forward who last year stayed in the Lakers rotation, earned starting spots thanks to a training table list of players more bandaged than Egyptian royalty. This year and last night going up against a former Laker Power Forward from last year (the talented Ed Davis now with the PDX), Ryno claimed his place even more in a team that isn’t exactly walking wounded anymore in that department (have you seen Julius Randle play lately?). Although they have just waived blocker Robert Upshaw in favour of keeping Canadian Robert Sacre and are taking ‘please don’t happen again’ precautions by resting the legendary likes of Kobe Bryant for the rest of the preseason.

Kelz’ buzzer beating dunk that got everyone off the bench like it was the playoffs and not preseason left everyone busting out in Magic Johnson smiles. It may be the early, early days but even Kareem or Kobe couldn’t frown at this one. After inbounding a previous play to a stealing away Portland player, Kelly faked out the biting opposition with a fool them twice look straight out of the pre-World Peace, Ron Artest dry-erase days that shamed Portland to the trail. This devastating, dominating dunk has even caught more fanfare than Larry Nance Jnr’s like father, like dunk slam smash.

“It wasn’t exactly how (Coach Byron Scott) drew it up, but I just read it a little bit, and I knew they were going to switch,” Ryan told the press post-game. “I attacked the basket. And at that point in a game, you’ve got to either finish over the top or have the defender make a great play.”

Ryan went all Machine Gun Kelly with this last second shot and showed with one vine of the moment that he was seven seconds away from being more than just a meme memory of Kelly standing next to the back of Clarkson’s jersey.

The Lakers where facing all kinds of former allies in the paint, from Ed Davis to big man Chris Kaman hitting last second baskets, but it was Kelly who left this case with the paint dry.

“I wanted to make up for it and make the play that made a difference,” the long haired, number 4 new Luke Walton-esque fan favorite remarked and boy did he! But he wasn’t the only one. Luck has been a Laker girl for L.A. of late, from tuning up international competition to having games against the champs in their favour called early due to ice hockey. Last night it was still rolling with future of the franchise Jordan Clarkson’s 17 points going mic-check, one-on-one, battling with Blazing hot rapper Damian Lillard who led a now LaMarcus Aldridge Portland (just like the Lakers mind you) with 20 points and 6 assists. Russell (12 points but 0 assists) and Randle (2 points but 4 assists) may have been quieter than usual…but x-factor, Brazilian signing from Barcelona, Marcelo Huertas wasn’t, coming along in his recovery and limited minutes. Notching and matching 8 points to go along with 8 amazing assists as the creative but controlled Point Guard showed he could be the new veteran leader of these young Lakers in his first NBA season.

Still you couldn’t hand this one to anyone else but Kelly as the R in the Lakers last night in Hollywood showed he in that moment was the worlds greatest.