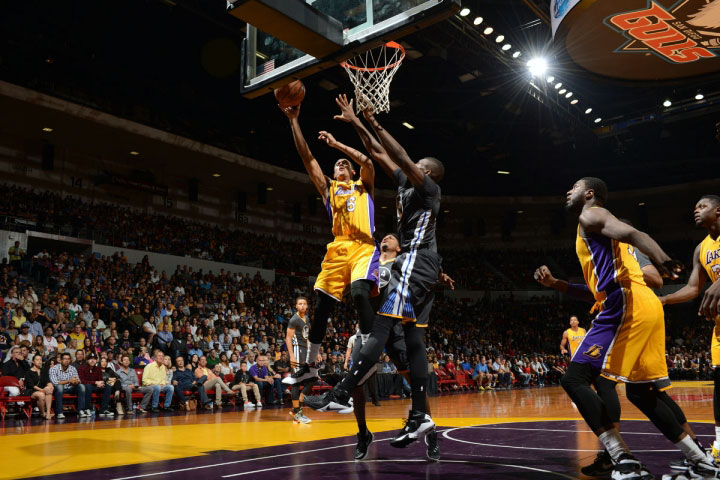 Watch your step Chick! This game was in the refrigerator early.

As the Californian coast kings of the champion Golden State Warriors and the storied Los Angeles Lakers met in San Diego for a clash they did more than just that, slipping and sliding like garden games thanks to the hockey ice coming up from underneath.

So much so that all this break dancing led to the game in the Valley View Casino Arena having to be called early with two minutes and sixteen seconds left in the third quarter with the Lakers up 85-70.

“The officials said they weren’t comfortable with the slippage of players,” Lakers coach Byron Scott told press. “They said there was a possibility of players getting hurt. Luke (former Laker and current Warrior coach under Steve Kerr’s absence, Walton) and I both talked. I told him I don’t mind calling this game.”

Of course he didn’t with the Lakers losing a lot this preseason except at home, from Hawaii to Las Vegas of course they will take this one.

A wins an win…and the fans still got a refund at the point of purchase.

Still for almost as much time as an NCAA game they still got some choice highlights among a blooper reel of Calamity James style antics, including a nice slip, trip and crossover recovery three from Stephen Curry which almost broke his and Jordan Clarkson’s ankles. It was the kids fresh out of college that provided the highlights in a game that was thankfully missing Kobe Bryant…because you wouldn’t want the injured franchise face taking it to this floor.

The court wasn’t the only thing that was wet. The Lakers 46% shooting showed the splash brothers even more water from the Pacific. Jordan Clarkson’s star trek and turn was a voyager last night, making seven of nine for 17 points including a nice put back dunk off number 17 Roy Hibbert’s post miss as he went to battle with MVP best in the league Curry’s hot 19 points (7-of-13), five 3-pointers and four assists. That heat from the chef wasn’t enough to evaporate all the wetness however as rising sophomore star Julius Randle worked the middle against last years runner up to both Most Improved and Defensive Player Of The Year Draymond Green adding 14 points in only 12 minutes of play. Which led Scott to say it best about his new great, “Julius doesn’t have any fear.” Or has Randle would rather put it going in on Green: “he can’t guard me”!

Must Read:
Sacramento Kings sniper Nik Stauskas goes 15-for-15 from beyond the arc

Debuting after injury and almost getting knocked again by this floor Brazilian Point God Marcelo Huertas only notched a dozen minutes but he was baking with six assists to go with four points…just imagine him with more time. Also with Lou Williams absence, Nick Young was determined to show we was still a worthy Sixth Man candidate, swagging up with 10 points, three big threes and even one four point play.

Want to tread more water? The biggest splash came when the son of the first Slam Dunk Contest champion Larry Nance Jr caught a candidate for NBA Jam of the year, running the floor, stretching the defense and strong-arming a finsh to the rim that charged the San Diego crowd, singing like Ron Burgundy’s jazz flute.

That to the NBA anchors and free game fans was worth making the trip alone.

With all these Lakers flowing against the Golden Splash Warriors and knocking down the champs, who says it doesn’t rain in Southern California?