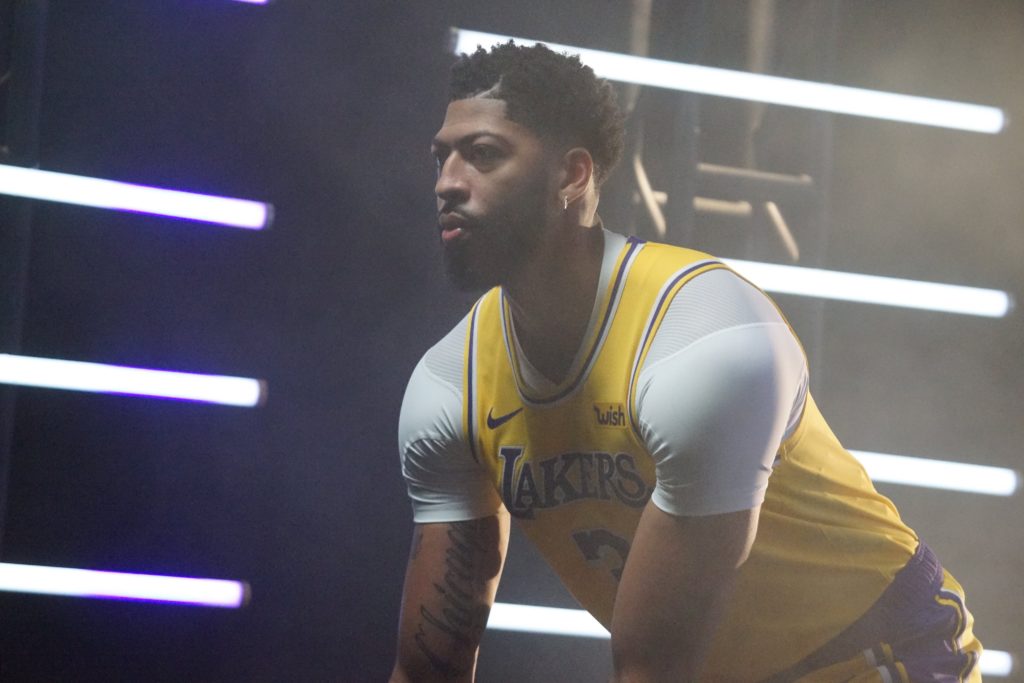 Mikan to Kareem. Wilt to Shaq. Even Divac to Gasol. The Lakers are known for the Showtime of their Hall of Fame big man legend. Featuring more sevens than Lamar Odom’s closet…and he’s one of them too. The generational legacy continues with Anthony Davis this year and another big name who once wanted to be an even bigger part of this legendary lineage like a young Andrew Bynum.

But this is getting ridiculous.

Try and bring your watercolors into the Lakers paint this season and your brushes may turn into bristles as the Lakers have their own big-three in their three-headed blocking monster on defence.

With Ant Davis, the return and hopefully redemption of Dwight Howard and last year’s X-factor, dunk to block in the energy of JaVale McGee, the King has all his monsters like Godzilla. Just call them Ghidorah.

LeBron may be the King and the Kuzma the young Fresh (Puma) Prince in line, but AD3 (for now…we’re talking digits here) is the Shaq to James’ Kobe for one of the West and Baylor/Wilt, Magic and Kareem most dynamic duos of all-time. Not just in storied Laker, but league history. The new signing who the Lakers lost the whole Lonzo (as he and A.D. swapped white tee under vests), Ingram and Hart young core house for (like Eddie Jones and Nick Van Exel back in the ’96 day) is one of the biggest difference makers in the NBA this season. Just like he will be if he remains a free agent next Summer which he is adamant on right now. But more of a concern for the Chicago centre of attention and the best Power Forward in the game right now is working on his 3 ball and a personal goal in wanting to become the 2019/2020 campaigns ‘Defensive Player Of The Year’.

He already has what last season LeBron termed “the conversation” when it comes to that category in JaVale McGee backing him up. The 7 whose epic gym to floor, weight room, muscled up energy made him the best Laker out of the gates last season on the emphatic ends of both coasts of the court. Swatting his way to his own slams. He’s been impressing this off-season too now media day has given way to training camp, pulling more tricks out of his fashionable fanny pack after pipping fellow young core traded and now cross-court Clipper Ivica Zubac to the post and deciding to sign on for another go-round, even with the biggest acquisition in the Lakers middle.

He will probably start in that spot though next to AD3 at the four. Especially with the crippling blow to Davis’ former Big Easy teammate DeMarcus Cousins. The once next Sampson and Olajuwon, Duncan and Robinson ‘Twin Towers’ in line, which one/two punch looked league best just a season or so ago. But after that preseason pain the Lakers decided to bring back a familiar face to jam fill that donut and plug the artery gap. Yet for all the Russell’s and Randle’s the Lakers were linked too, they brought back Dwight Howard of all people. Remember him purple and gold? But now everyone in Hollywood who thought the Kardashian like reality show we have suffered through before left with the Ball family father has got over this initial shock-like thinking that was Biff’s tarantula on top of Howard’s head-the big bruising bully of a center actually looks like a decent pick-up.

Talking about a humble comeback focused on what the team needs the three time DPOY to do in however many minutes he plays. Rocking the 39 like there was no other number in the rest of that tier left up there in the retired rafters, as he looks to join that thirty-something legendary company once more. And judging from him being the King and Coaches most impressive standout from training camp this tall side of Avery Bradley, it looks like Dwight will make it right and Howard’s end is here to stay in L.A. Like those front-page newspapers and Beverly Hill hotel fronts looked to do back in the day when he was a free agent rocketing off to Houston like Westbrook. Some real estate space that’s probably going to be rented in order to coax Davis into a permanent home with the number 23 next year.

But the scarier thing than seeing the dunking Dwight back in Lake Show colors is the fact that in tandem Coach Vogel may place the twin blocking bigs of Howard and McGee next to A.D. for a big line-up down the stretch that may even see forward Kuzma playing at the guard he looks like and LeBron finally making his point at running the show from basketball’s quarterback position.

Must Read:
Canadian Basketball Stars of the 1920s’

Add this with vets like Rondo, KCP and your boy Caruso back. Not to mention pick-ups like defensive dog Avery Bradley alongside big role playing back-ups like reigning Raptor champion Danny Green, Quinn Cook, Troy Daniels and Jared Dudley (and let’s not to forget the mini-freak of Kostas Antetokounmpo), then the Lakers may just have the best defensive team in the league-let alone one as a complete whole-starting upfront.

And just wait until Cousins joins this front-court family officially for his Davis Pelican fly by New Orleans reunion.

Now how many heads will grow back in their place if you manage to cut off just one of the King’s men in this season were crowns will roll?